EA Sports' franchises haven't always had easy transitions to new systems. Rory's debut isn't as bare as last year's NHL 15, nor as unplayable as Madden NFL 06 was last generation, but its charms are limited. It does some things well, but they aren't enough to make it stand out.

The freedom to mix and match gameplay options (like your swing type and assists), a gauntlet of nighttime minigame challenges, and an option for shorter career tournament rounds are nice, but they don't distract you from what's missing. Online play lacks country clubs, simultaneous multiplayer tourneys (only head-to-head play), and the create-a-challenge of years past. Plus, part of the career mode's new progression system takes control out of your hands.

You no longer manually add attribute points to specific skills when you level up – the computer ups everything automatically. To be fair, the progression path it chooses doesn't hamper your performance on the course, and you can shape your character with attribute packages that boost specific sets of skills, but I'd rather sculpt my pro myself. Furthermore, your customization options are limited to a handful of pre-set appearance templates that are a shadow of past iterations.

The courses are limited as well. The loss of The Masters/Augusta hurts not only because it's one fewer event for a FedEx Cup schedule that now only has 10 locations (more will be added after launch as free DLC), but the iconic event used to provide added focus that is missing here. At launch four fantasy courses are also included, but notables Paracel Storm (the Battlefield 4 map) and Coyote Falls at the Grand Canyon are not part of the tour. Paracel Storm is only a visual wrapper and not really interactive, while Coyote Falls makes you navigate its steep drops and rocky cliffs.

The game doesn't bind the already-bare modes together to make everything relevant or engaging. For example, the coin system in the last PGA game connected your career progress with the offline modes, but that's gone. Similarly, the Night Club challenges (below) have no online component, and your online tourney winnings don't connect to any other part of the game. I liked the Night Club challenges, but progression through them is too linear, blocking off access to all the courses. PGA Tour's offerings may be pared down, but the gameplay and the slight evolution of the series' ball-striking system feel familiar and comfortable. I like this year's option to customize which gameplay options/assists you want to use (like the ability to apply mid-air spin). My only complaint is that the range of the putting meter is a little short, which makes it easy to overcook the backswing and add more power than intended. I initially had some trouble with the swing power of my wedge shots, but I got used to it.

I also like the quick rounds option (see video below), where the computer automatically selects a handful of holes each round. It duplicates holes sometimes from round to round or when returning to the same course, but over a four-round weekend you play plenty of golf and see what lots of courses have to offer. Your progress between the rounds for the holes you don't play is simmed by the computer based on your golfer's attributes. My score only fluctuated a stroke up or down, and my place varied mainly because of how other golfers fared.

Rory McIlroy PGA Tour isn't a bad game, it's just one that doesn't positively make the case for longtime fans of the series or the new systems. With the gameplay nudged ahead only slightly, the graphics not particularly new-gen, and a reduced feature set, the mind easily wanders to what we've lost rather than finding comfort in what's there.

7
About Game Informer's review system
Concept
A back-to-basics feature set for this first entry on the new systems
Graphics
Overall the game looks decent, but not noteworthy. The framerate stutters in the pre- and post-gameplay scenes in particular
Sound
The announcers are good, giving info on the course, talking amongst themselves, and sounding interested in what’s going on
Playability
Fans of the old Tiger series will find the gameplay familiar, although I had a little trouble with the putting
Entertainment
Rory has solid gameplay and covers the basic feature bases, but it doesn’t distinguish itself
Replay
Moderate 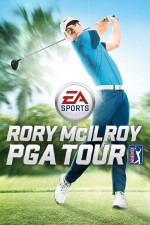