Rogue Warrior does nothing right. Even male genitalia references are handled poorly, making you think protagonist Dick Marcinko is hitting on the enemy rather than taunting them. With the gunplay being as bad as it is, and the story coming across as a six-year-old’s interpretation of Cold War events, the only fun comes from the possibility of stepping into the shoes of the worst Rambo ever.

Voice actor Mickey Rourke embraces this puzzling profanity to a degree that makes it seem like he just landed a movie role that could win him an Oscar. Listening to this guy abuse the f-bomb and coherently talk about polar bear testicles is strangely fascinating. The remainder of the content, even Marcinko’s obsession with knifing enemy crotches and throats, brings no joy, no laughs, or even the faintest of hope that the game could get better as it goes along.

The game doesn’t even display enough realism to convince me that it’s based on our planet. I’m not sure what kind of alien technology is used in the machine guns, but whatever it is, it removes that pesky thing called “recoil.” When Marcinko fires, he can keep it steady on an enemy’s face without it inching up a hair – not even a hair!

Most enemies can not see more than 50 feet, and the sound of hurried footsteps (created by Marcinko sprinting across a room) does nothing to alert them. If you run across a sniper rifle, you can pick them off one-by-one uncontested, as they are oblivious of your presence. The ability to sprint undetected can also rack up a lengthy chain of stealth kills, which are usually accompanied by a one-liner.

While it may seem like I’m cutting this review short, that’s pretty much all this game offers. It’s short, repetitive, and crappy all the way through. I tried to find a multiplayer match 22 times over the course of two weeks, but have yet to find one person who is trying to do the same thing. If you decide to play this game, play it to its conclusion. You will be rewarded handsomely with a song that uses Mickey Rourke’s dialogue as the lyrics.

I can’t think of a more fitting way to end this review than with a one-liner that harks back to my initial comment, and, in a roundabout way, sums up this entire game: “There’s going to be f__ing asses bleeding all over the place.”

1.5
About Game Informer's review system
Concept
More of a one-liner generator than a game
Graphics
he close-range kills look cool. All other animations are laughably bad. This game also offers the least impressive grenade explosion I’ve ever seen
Sound
Mickey Rourke loves saying nasty things, even when they don’t make sense. He’s quite good in this game
Playability
None of the gameplay feels finished. The first officially released alpha game?
Entertainment
The single player campaign is a joke, and no one (and I mean no one) is playing multiplayer)
Replay
Low 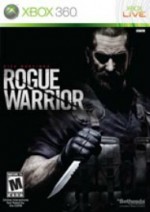