From Kinect to Apple TV, Harmonix has gained a reputation for supporting fledgling platforms. Following the revival of the Rock Band franchise in 2015 with Rock Band 4, the studio turned its eyes toward another new piece of hardware: the Oculus Rift virtual-reality headset. After releasing Harmonix Music VR, a collection of music-focused minigames, the developer called upon its most recognizable IP, Rock Band.

Rock Band VR combines familiar conventions with enough new elements to make the experience novel and exciting for fans of the genre. Taking full advantage of the technology, Rock Band VR puts players in the first-person perspective with little UI clogging up your view, a departure from the view in mainline Rock Band games where the concert video-style presentation is background to the prominent note highway. Instead, you're free to look around the stage, with the only UI appearing in a chord guide that floats above the crowd, and a combo meter on the head of your guitar. This new approach plays into the strengths of virtual reality, removing the barrier that exists with previous series between the player and the screen. When a song I love like Foo Fighters' "Everlong" or Megadeth's "Hangar 18" comes on, it's difficult not to get into it. I found myself tapping my foot, nodding my head, and even holding the guitar in a more stylish manner during my favorite tracks.

I enjoyed being able to look out over the crowd as I played through a set, but unlike the similar concept in Guitar Hero Live, the people you're looking at are rarely interesting. The members of the crowd do things like try to take selfies or yell out at the stage, but the concept doesn't go far enough. What's worse is your bandmates, who feel more animatronic than human. Each time I looked over at my fellow instrumentalists, they did little more than stand at their mic stands and sing along - save for some pre- and post-song animations, like one where one of them smashes their guitar. One of the things that made Guitar Hero Live's first-person perspective so much fun was the campy-yet-entertaining way that your bandmates and fans reacted to you during the songs.

Setup for Rock Band VR is surprisingly easy. You attach a special Oculus Touch holder to the head of a Rock Band 4 guitar controller and sync the controller to your PC. Once that's done, it's just a matter of getting the software up and running and learning the basics of gameplay through the tutorials.

Despite using the same guitar controller, the core gameplay of Rock Band VR is drastically different from the rest of the series. Rather than playing along to specific colored gems on a note highway (that is reserved for the peripheral classic mode), you improvise what you want to play using a scrolling guide that hovers over the audience. The guide doesn't tell you exactly what notes to play, but rather when you should change chords and chord shapes. Within this system, you also rack up points using different established combinations of the various chord shapes. With no note highway, you're instead scored based on how well you follow the guide.

Jumping between bar chords, power chords, arpeggios, and muted arpeggios is fun, especially when the song breaks those progressions up with a solo. The guitar-solo mechanics borrow heavily from the mechanics of Rock Band 4's improvisational solo mechanics, so if you've played that mode, you know what to expect. However, players looking for a true challenge like Guitar Hero and mainline Rock Band games might be disappointed; instead of the satisfaction of completing a song, the main thrill of Rock Band VR comes with making songs sound good through your improvisation (trust me, you can make some classic songs sound like garbage since the guitar sounds mirror your play).

Playing through songs using this system is fun at first, but it falls flat quickly. Unlike the series' classic gameplay, Rock Band VR's core gameplay doesn't feature the same nuance from song to song. This means that while a track like Stone Temple Pilots' "Plush" is drastically different from Dream Theater's "Pull Me Under" from both an instrumentation and a structural perspective, the gameplay does not reflect that massive gap between those two tracks. You can improvise to make them sound more distinct, but the act of actually playing those songs does not feel as different as it should.

The setlist is made up of a diverse group of songs, featuring classic Rock Band favorites like Bon Jovi's "Livin' on a Prayer" and The Who's "Won't Get Fooled Again" to new additions to the franchise like Kaleo's "Glass House" and The Pretty Reckless' "Heaven Knows." I love that these songs can be played in both the new improvisation-based gameplay, as well as the classic mode with the note highway. The modes play completely different from one another, so when I wanted a break from one style, it was great to be able to easily jump to the other. I just wish that classic mode had more going on than just a blank background that does nothing to capitalize on the immersive properties of virtual reality.

Multiplayer is one of the cornerstones of the Rock Band franchise, but Rock Band VR is strictly a single-player experience centered on quickplay and a short, forgettable story mode. I understand why the multiplayer is missing given the format of the VR gameplay, but without being able to play with friends, the game feels like a half-measure rather than the full-blown Rock Band experience that made the series so much fun in the first place.

Stepping into the shoes of the lead guitarist adds a new layer of excitement to the Rock Band formula, and the new gameplay mechanics are fun to mess around with, even if it feels completely different from the original gameplay style. Harmonix has always prided itself on giving players new ways to experience their music, and Rock Band VR succeeds in that regard. Though lacking in content, Rock Band VR is a fun, new way for the long-running series to let you live out the rockstar fantasy. 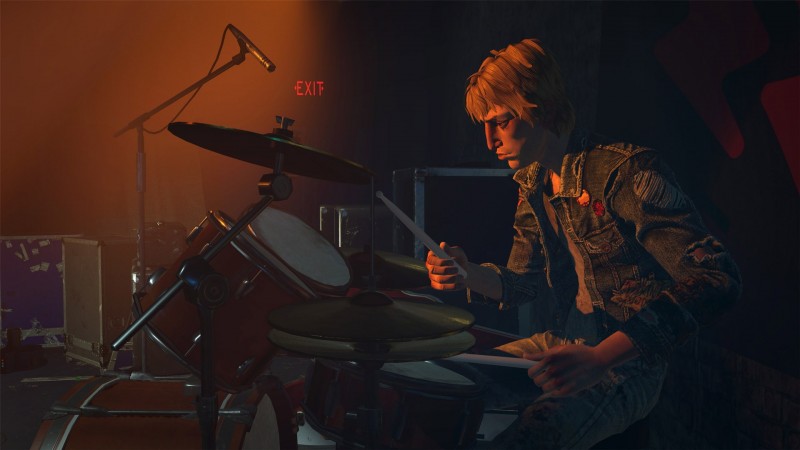 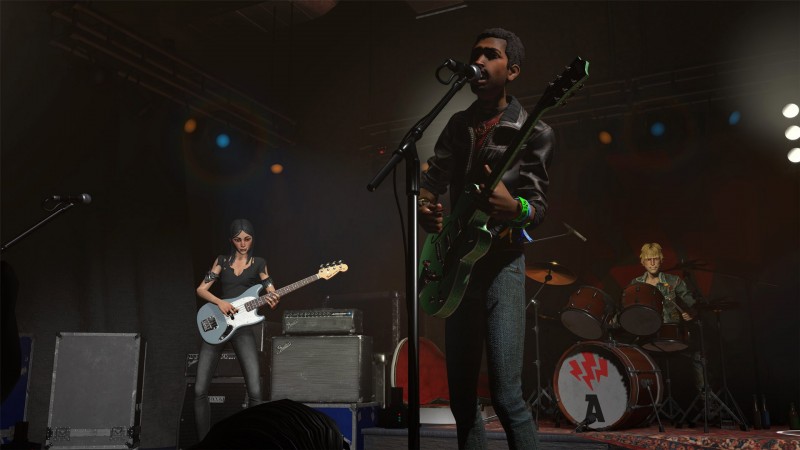 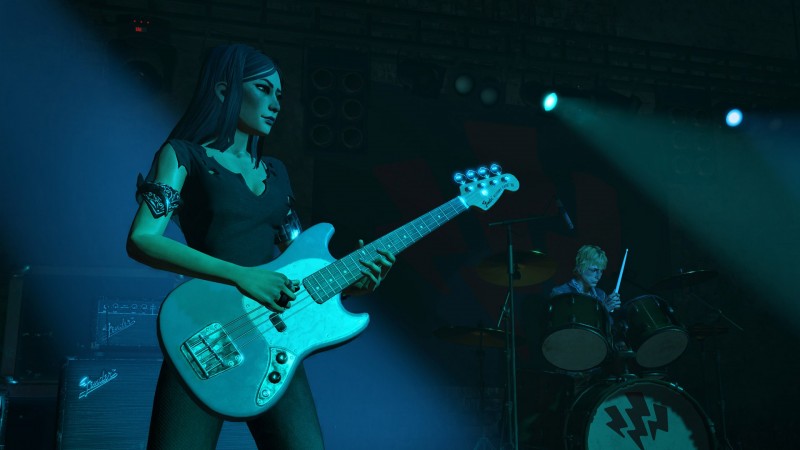 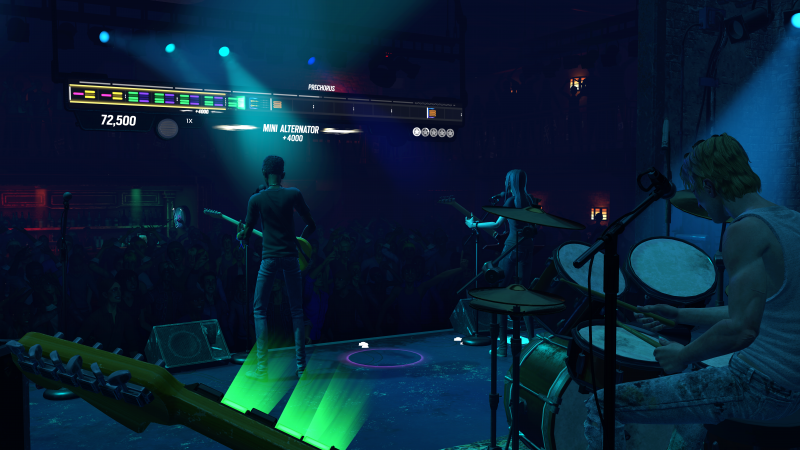 6.5
About Game Informer's review system
Concept
Take the stage in Rock Band with a new first-person perspective and improvisation-based gameplay
Graphics
Putting yourself in the middle of a rock show can be exciting, but your bandmates and the crowd don’t give you much to look at
Sound
The roar of the crowd and the sound of your guitar pair nicely to create an experience that is easy to get lost in
Playability
While a classic mode allows for traditional Rock Band gameplay on the side, a new take on the core gameplay brings a fun-yet-shallow experience
Entertainment
Being able to step into the shoes of a rockstar in first-person is novel. However, the new gameplay lacks the depth and strategy that made the series popular in the first place, and the formula feels empty without a multiplayer option
Replay
Moderately high