Music-game faithful have had a long wait since 2010’s Rock Band 3. Harmonix set the high-water mark for the genre with that title – even as it became clear that the flood was slowing down – with more instruments and styles of play, along with a huge number of on-disc songs. Five years later, and on new platforms, even Rock Band 4 can’t match its predecessor’s grand ambition, dropping online play, pro guitar support, and keyboards. The pared-back experience focuses on what most players embrace and enjoy. Newcomers will feel welcomed, but for veteran bandmates, this feels like coming home after a long time away.

The core gameplay remains unchanged, offering skill-based immersion in great popular music that’s ideal for both solo virtuosos and raucous partygoers. Guitar, bass, drums, and up to three singers can hop into the limelight for a performance, though the vocal lines share a single slot in end-of-song scoring. The familiar scrolling note highways have some flashy new visual effects, but otherwise work as they always have, providing increasingly complex rhythm and color matching. While it’s largely invisible unless you’re watching for it, any given song’s note layout is varied and sophisticated, demanding challenging finger placements on the guitar neck, tough strum patterns, or unpredictable drum fills on the pads all the time.

A few novel tricks are in the mix. Freestyle guitar solos are a new riddle to unravel, and they also infuse a sense of freedom the guitarist role has always lacked. By holding down different buttons and strumming at different speeds, players can approximate the feel of crafting a live solo, complete with distortion effects and frantic finger tapping. These moments are fun and can sound amazing at times, but Harmonix has wisely allowed purist players to tap the d-pad to opt out, restoring the artist’s original intended solo. I’m a big fan of the new freestyle vocal options as well, which allow singers on higher difficulties to harmonize within the song’s key without any score penalty, just like a real frontman would. Along with improved crowd noise and chanting, this is the best approximation yet of an onstage show.

The 65 on-disc songs may not represent the series’ biggest set list, but it’s certainly one of its most eclectic and entertaining. Chart-topping sing-alongs like “Uptown Funk” and “Brown Eyed Girl” join indie darlings like The Both’s “Milwaukee” and unstoppable locomotives like Heaven’s Basement’s “I Am Electric.” Making your way through the various instrumental parts of each song is akin to getting a mix tape from a musically savvy friend; the more you listen, the more you come to appreciate not just the tunes, but the way each song fits into the larger whole.

Though the songs are entertaining, the modes offer few surprises. Quickplay options are ideal for get-togethers, with smart organization options and a smooth and simple user interface. The new tour encourages choice, demanding again and again that you decide between big style, big fans, or big money. As a result, you could play two complete tours and visit entirely different cities and shows.

A smartly crafted voting system allows the full band to participate in music selection before many songs, and I love that downloaded tracks integrate seamlessly into the tour. New cosmetic items unlock over time, but otherwise the reward loop feels a little sparse.

In this year’s music-game scene, Rock Band 4 offers tried-and-true polish, and an impressive opportunity for backward compatibility. Whether you’re importing a back catalog or not, the new title stands on its own with smart music selections, and skill-based gameplay refined over years of experimentation. After a few years away, I’d almost forgotten how fun the Rock Band experience can be. 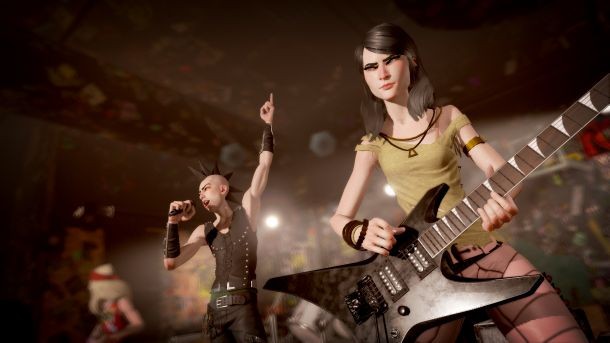 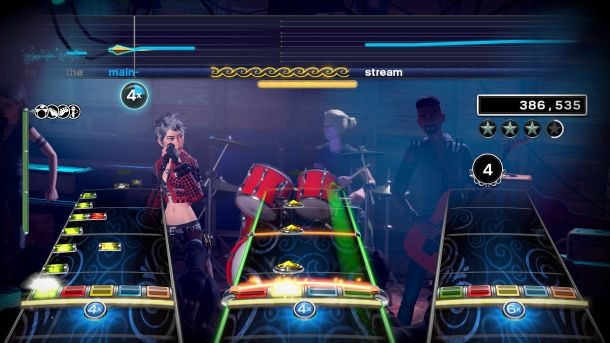 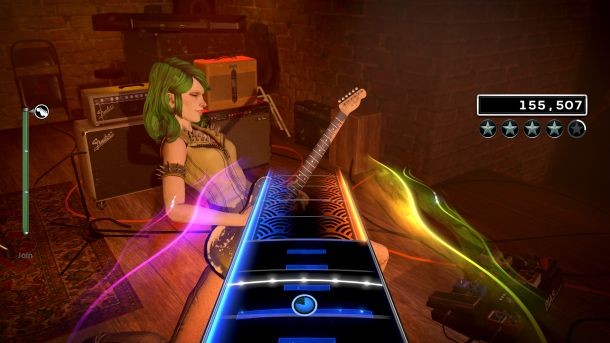 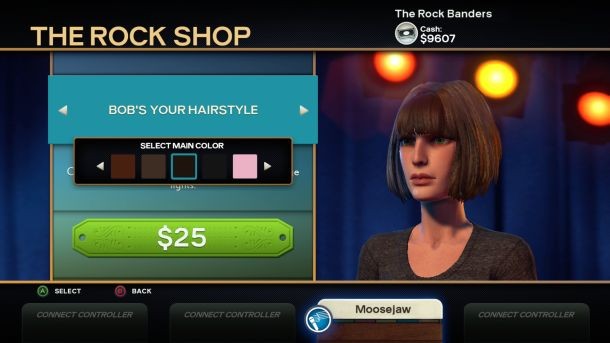 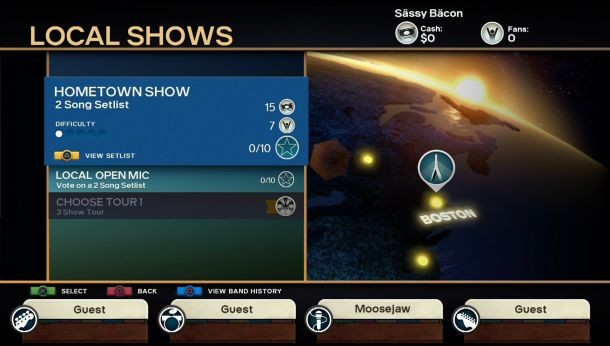 8.75
About Game Informer's review system
Concept
Another phenomenal set list from Harmonix headlines this return of familiar mechanics
Graphics
New animations and lighting look great, but repetition of movements from the onscreen characters isn’t ideal
Sound
Great tunes are accentuated by a clever crowd-response system, helping you to feel the energy of a live show
Playability
Harmonix has spent years mastering a UI that is friendly to newcomers and veterans alike. The polished controls during songs are precise, with an immaculately crafted challenge curve
Entertainment
A slick and engaging way to enjoy interactive music, albeit with fewer bells and whistles than Rock Band 3
Replay
High