Harmonix was founded on the principle that everyone should have access to the joy of creating music, even if they never had the benefit of learning a real instrument. The premier music game developer fulfilled its goal in developing Guitar Hero and Rock Band, but Rock Band 3 is a whole new ball game. While continuing to polish the experiences that established the Rock Band brand, this new installment also offers players the opportunity to take the next step and learn to play the instruments we’ve been pretending to rock out with for the last five years.

The core of any music game is the song list. Rock Band 3 features the most unusual and varied in the franchise, but it also has fewer widely recognizable tunes. While Queen’s “Bohemian Rhapsody” and Huey Lewis and the News’ “The Power of Love” vie with several other historical chart toppers, the meat of the setlist lies in artists like The Smiths, Metric, and the Flaming Lips. The more I dug into this eclectic selection of tunes, the more it reaffirmed my confidence in Harmonix’s song selection team. With each part I played, I fell more in love with the interplay of instruments. As a result, the only people I envision being disappointed could be folks who choose to play only one instrument. With guitar, bass, keyboard, drums, vocals, and harmony vocals all vying for attention, not every song will shine for everybody in the band.

With the new songs come new instruments. The keyboard in particular has several songs that highlight its flexibility and fun. I really like this newest peripheral; it’s small and light, and can be played from a number of positions (lap, table, or strapped up like a keytar). I also admire the onscreen notation system that shows off the many keys that need to be played in pro mode. By the time you’re rocking the highest difficulty on pro mode, you’re playing the full right-hand parts to the songs in question. It’s a thrilling sensation, whether you’ve ever played piano or not.

The new pro-guitar system is remarkable, even if the high cost of entry and steep challenge make it prohibitive for some players. A phenomenal tutorial system introduces the basics of fretting, barre chords, and finger placement, along with all the other skills you’ll need to play the world’s most familiar rock instrument. Nothing replaces a real teacher, but Rock Band 3 does a good job of approximating the real thing.

The notation system for this new guitar is based on traditional guitar tablature, with some notable differences in the visual representation of chords. It takes a awhile to pick up, as the game demands you learn the unique shapes that correspond with each chord on the guitar’s neck. The only way to dive into this new experience at launch is with the Mustang guitar – a reasonable approximation of a real guitar with buttons instead of frets on the neck. I liked the Mustang, but it’s a far cry from the challenge of real strings, and it’s not a true guitar that can be plugged into an amp. The Squier peripheral, which releases in a few months, solves these problems. It will likely cost the equivalent of a true guitar, but this is fair since it is one.

Even with a focus on these new toys, Rock Band 3 is still excellent with existing instruments. I loved soaring through the guitar and bass parts with the old instruments; several of the songs have great solo lines, and there’s a nice mix of rhythm and lead play throughout the setlist. Normal drums continue to be a blast, and the transition to pro mode with three additional cymbals is the easiest “pro shift” to make, thanks to clear visual cues that distinguish cymbals and pads. Singers have a bunch of fun melodies to explore, and harmony vocals return from the Beatles game for all those wanna-be backup vocalists.

It may be far less glamorous than new setlists and instruments, but the revamped user interface that underlies the whole experience is the game’s most unqualified success. Fixing nearly every problem from previous installments, and layering in a whole new career structure, the new format is brilliant. Each player has their own pop up menu to drop in and out of play and adjust their options. Setlists are sortable, saveable, and shareable. Players can rate songs to determine their likelihood to show up during random selections. New road challenges offer bite-sized tours that can be conquered in a night of play. Hundreds of goals span across all modes of play, delivering progression no matter the way you spend your in-game time. Innumerable tiny changes also make the game more fun and easy to play, from the ability to disable drum pad navigation to the option of continuing to play a song after failing out.

In many ways, Rock Band 3 is a culmination of Harmonix’s efforts to bring music to the masses. But it’s also a new chapter in the franchise that starts the gradual merging of real and game-based music. Plenty of naysayers have already declared music games dead. Harmonix certainly hasn’t gotten the message; this band is primed for a new tour. 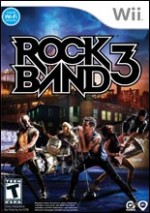 Harmonix takes the next profound step forward for music games in the largest and most polished game in the series.

Purchase More Info
9.25
i
Game Informer's Review System
Concept Reinvigorate the music genre with new ways to play
Graphics Excellent visuals match the band scene, and well-animated transitions carry you from the menus into the game
Sound An eclectic and excellent set list takes full advantage of the many instruments
Playability The new pro instruments are challenging, but extensive training helps you along
Entertainment A massive title that’s more like several games in one; Rock Band 3 could keep you entertained for months
Replay High