Most heroes are cut from the same cloth. Gamers usually like their champions to feature square jaws and confident smiles. We prefer saviors who keep their six packs in their abs, not dribbling down their cheek. This is why John Rochard is such an unusual protagonist. This barrel-bellied, blue-collar worker with a southern accent and a penchant for oddball analogies is a character with real character. Even with all his eccentricities, John Rochard is a lovable redneck and a refreshing change of pace – much like the game named after him.

When Rochard’s outer space mining rig unearths an ancient alien artifact, he thinks he’s discovered a relic that will save his ailing mining operation. But when his mining team mysteriously disappears in a cave on the same day space bandits invade his rig, Rochard realizes that this ancient artifact might not be worth its weight in trouble. Rochard’s galaxy-spanning adventure ties together undiscovered alien races, evil corporations, and (of all things) ancient Native American myths. However, the story is more promising in theory, and Rochard’s amusingly absurd one-liners prove to be the script’s strongest element.

After bandits attack his base, Rochard’s trusty G-Lifter never leaves his side. Functioning a bit like the gravity gun from Half-Life, the G-Lifter was originally commissioned to assist miners as they moved heavy mining equipment and 10-ton rocks, but Rochard quickly repurposes the device to help him navigate though the messier parts of his space rig and defend himself from an invading army of pirates.

Rochard could be labeled a 2D platformer, but Recoil Games would rather have you solve a puzzle to get to the other side of a room than jump across it. Many of the game’s puzzles task you with navigating past a series of force fields. Some force fields block organic material, while others block inorganic matter or energy, so you might need to place boxes along an organic force floor to jump across it or shoot fuses through inorganic force fields to start generators.

Rochard’s other handy tool is his ability to control the environment’s gravity. At any point in the game, Rochard can turn a rooms gravity down to Moon-like levels. This trick changes Rochard’s approach to puzzle solving in a variety of creative ways. With reduced gravity, not only can Rochard jump higher and survive longer falls, but it extends the firing trajectory of every item he picks up with his G-Lifter, lets Rochard float skyward while standing on air vents, and lets him use the G-Lifter like a grapple hook to swing off bolted objects. I particularly liked jumping through the air in low gravity and then fireing a box downward to give myself a double jump-like boost. Recoil Games shaped a surprising number of puzzles around only a few gameplay elements, and thankfully the mechanics never feel stale.

While Rochard’s puzzles kept me intrigued until the closing credits, the enemies clogging its hallways often felt like they were just in the way. Rochard’s AI rarely does anything more than casually stand in front of you and fire from the hip as you riddle their bodies with bullets or drop heavy crates on their heads. The platforming also feels loose, but fortunately the game rarely requires precision platform jumping, and the few missed lunges you make are fairly free of consequences – so I never grew frustrated by the floaty controls.

These small complaints don’t ruin the game’s larger experience. Rochard’s humorous dialogue, intriguing setting, and clever puzzles round out a package that is as unique and special as its titular hero. 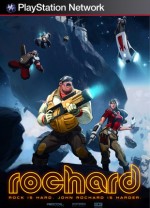 John Rochard is such an unusual protagonist, but even with all
his eccentricities, he's a lovable redneck and a refreshing
change of pace – much like the game named after him.

Purchase More Info
8.25
i
Game Informer's Review System
Concept A 2D platformer that mixes gravity control with environmental puzzles
Graphics Rochard’s cartoony visuals don’t ooze personality, but they get the job done
Sound The voice acting is solid and the clever mix of songs helps make up for its otherwise boring soundtrack
Playability The platforming controls sometimes feel floaty, but manipulating objects with the G-Lifter is spot on
Entertainment Rochard’s puzzles don’t provide much challenge, but they are fun to solve and the characters are occasionally amusing
Replay moderate