More Like “Partially Cloudy With A Chance Of Sunshine”
by Ben Reeves on Dec 09, 2013 at 06:45 AM
Publisher: Chucklefish
Developer: Hopoo Games
Release: November 8, 2013
Rating: Everyone 10+
Reviewed on: PC
Also on: PlayStation 4, Xbox One, Switch Most modern games are very efficient at directing players to their goals. Generally, this is a good thing, but it can eliminate any mystery about how a title works. I occasionally crave the exploration and experimentation required in older, less forgiving games. Risk of Rain harkens back to an era when gamers had to play a game for several hours before they really knew how it worked – a classic approach that can still be fun.

Risk of Rain is an action/platformer with roguelike tendencies styled after 8-bit games. The story is minimal to non-existent: You play the lone survivor of an orbital space train crash who must fend off hundreds of deadly enemies and find a series of teleporters. It doesn’t hold your hand once the action starts, and there is no opening tutorial. You’re immediately dropping into one of several randomly generated worlds where unending waves of enemies teleport into existence, and you have to quickly defend yourself with a handful of offensive and defensive maneuvers set to cool down timers. After exploring the world, you eventually stumble across a teleporter, which summons a boss that must be defeated before you can progress to the next randomly generated map.

You can run straight to the teleporter if you want, but exploring the world has its benefits. Enemies drop experience and gold, which can be spent to unlock upgrades from chests that are scattered across the maps. These upgrades are game-changers, since they give you a range of bonuses like increased defense, healing out of combat, and attacks imbued with a chain-lightning effect. You don’t know what each upgrade does until you pick it up, but they’re all worthwhile, and I eagerly collected every coin that fell out of an enemy corpse as I went on the hunt for my next chest.

Unfortunately, there is too much pressure to race against the clock. As you explore Risk of Rain’s randomly generated environments, a difficultly bar slowly fills, and when the bar reaches certain milestones, more challenging enemies begin to pop into the world. You can kill enemies and collect new items at your leisure, but if you hang out in one area for too long, you eventually face down enemies who are way out of your league. This risk/reward system is promising, but the random nature sometimes works against you. Some areas and chests are created forever out of your reach. On several occasions, enemies continued to teleport into the same narrow corridor, creating a mob so dense it was effectively impossible to clear out.

Rain doesn’t take long to beat, but its permadeath system means that if you die right before you bury the final boss, you’ll have to start to game over from square one. I was ready to curse more than once after big screw up or a series of unfortunate mishaps sent me to the game over screen. Risk of Rain might appeal to gamers who thrill over the challenge set forth by games like Demon’s Souls or FTL: Faster Than Light, but the uninitiated will find Risk of Rain hard to approach. 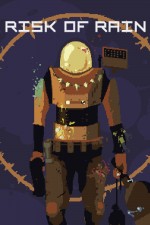 Risk of Rain
harkens back to an era when gamers had to play a game for several hours
before they really knew how it worked – a classic approach that can
still be fun.

Purchase More Info
7.5
i
Game Informer's Review System
Concept Inspired by 8-bit platformers, this randomly generated action title doesn’t pull any punches
Graphics The randomly generated environments are visually uninspired, but the enemy designs are great and have a nice variety
Sound After a few hours, the 8-bit-inspired soundtrack made me feel like switching over to podcasts
Playability Platforming with a keyboard causes hand cramps, but the interface works perfectly with a controller
Entertainment Fans of roguelikes can sink their teeth into unlocking all of the classes, but some gamers might miss the overarching progression system
Replay Moderate