Risen 3 opens with you exploring a ruined temple on a jungle island in search of lost treasures. Things take a turn for the worse as you discover a portal to the underworld that claims your life, and after a modest beach burial, you’re left behind. Luckily, doctor/shaman Bones shows up and returns you to reality, but there’s a catch: You’re going to slowly become a minion of the underworld unless you can defeat the darkness. While the adventure has lots of content to explore (and multiple ways to experience it), Risen 3’s imprecise combat and ponderous dialogue keep the title from realizing its swashbuckling potential.

The core combat should feel familiar to modern day action/RPG players; parrying, dodging, and readying heavy blows are all important. Players can also take advantage of the offhand slot with things like dueling pistols to add some range and surprise to their attacks, as well as add a host of learned abilities. The combat in Risen 3 feels almost stilted at times, with swings and spells moving the player huge distances with lunging attacks that make the pace of combat seem strange. As you’re fighting a giant jungle spider that’s parrying everything, one tap on the button might send you spinning to a spider ally far to the right. These mistakes can get you out of some hot water, but it makes combat a proposition that’s anything but precise.

Right out of the tutorial gates, you’re thrust immediately into the open-world structure of Risen 3. Four major islands are available to explore right away, and you can travel freely between them, making exploration easy. You immediately begin meeting a host of NPCs, many of which can teach the player new abilities or confer quests, and some even join your crew. NPCs are dotted across the world, willing to grant skills as long as you meet the stat prerequisites. Progression is meaningful, and players dive into one of three paths (Crystal Mage, Voodoo Pirate, Demon Hunter) on a playthrough, which are largely self-explanatory and come with their own specific questlines. I finished the game as a Demon Hunter, augmenting my melee abilities with potent skills and buffs.

You quickly settle into a questing/exploration/monster-slaying reward loop as you move through the easier areas of each zone. This loop is mostly entertaining, but can get repetitive – especially as one becomes mired in dialogue between bouts of battle. The dialogue is charming if you’re into cheesy B-movie fare, with the protagonist dropping f-bombs randomly and with gusto, and random maids of the realm responding to your monster slaying boasts with things such as “I’d love to wrestle with your big monster.” I felt like I was suffering through the dialogue most of the time, as much of it is meaningless window dressing attempting to somehow add to an absolutely straightforward plot.

While Risen 3 doesn’t have great combat or an enthralling story, there’s a lot of content to delve into for those hungry for an open-world action/RPG, and that might be enough to entice fans to give it a try.

Note: This review pertains to the PC version. Risen 3: Titan Lords is also available on PlayStation 3 and Xbox 360, though Game Informer was not provided with early copies of them for review.

7
About Game Informer's review system
Concept
After a search for treasure takes a wrong turn, reclaim your life and spirit from the clutches of darkness
Graphics
It looks pretty at times, with green flames lighting up the darkness and picturesque islands
Sound
Tons of cliché dialogue, pistol shots, and rattling bones make up an expected audio selection
Playability
The controls are simple and easy to use, but getting things to land perfectly can be challenging with the combat quirks
Entertainment
own
Replay
High 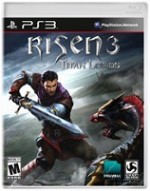