Rise of the Guardians Review

Childhood Legends Fight A War Against Monotony
by Jeff Marchiafava on Dec 10, 2012 at 10:43 AM Gamers don't expect a lot from games based on mediocre DreamWorks films. While Rise of the Guardians is built on a solid foundation of hack-and-slash action and co-op multiplayer, the simplicity and monotony of the gameplay quickly becomes obvious.

Rise of the Guardians allows up to four players to take control of Santa Claus, Jack Frost, the Sandman, the Easter Bunny, or the Tooth Fairy in their quest to overthrow the nightmare-inducing super villain Pitch. The childhood legends have gotten a serious dose of 'tude since you last saw them; North (a.k.a. Santa) has "Naughty" and "Nice" tattoos on his arms and speaks with a Russian accent. Bunnymund (the Easter Bunny) is now Australian for some reason. He throws boomerangs at his foes and says annoying one-liners like, "You just got bounced!"

Don't expect the charm or production values of the movie, however. The cutscenes are the cheapest example of animated storyboards I've ever seen in a game; I doubt young kids would even recognize who the characters are supposed to be, or be interested at all in the story the sparse cutscenes are attempting to rehash.

On the plus side, the in-game assets fare much better, and the gameplay provides some simple fun. You can cycle between all five characters on the fly by pressing left or right on the D-pad, and each character has three unique special attacks that can be unlocked as you level up. You also have a handful of stats to upgrade for each character, and unlockable gems that provide passive bonuses. Much of this is largely inconsequential, however. The variety in the special attacks is nice, but rarely did I ever have to do anything other than mash a single button to defeat my opponents. I never even used the block button other than the one time the tutorial prompted me to try it out. After maxing out the strength and speed abilities and equipping a few gems for each character (which took an hour or two tops), leveling up didn't matter much either.

Rise of the Guardians' five realms are the most interesting aspect of the game, as each one has a unique visual style based on its character. You can visit them in any order you choose, though your missions are always the same, and involve either killing a bunch of shadow enemies in a given location or picking up a collectible. All of the mission types are devoid of challenge; I only fell once during combat, which required me to use one of the three of revives you have at your disposal at any given time.

The Edge
Rise of the Guardians seems like a natural fit for the Wii U. Not only is everything about the game family friendly, but the GamePad allows you to always have the menu open for checking your map and upgrading your characters. This convenience doesn't outweigh the fact that the Wii U version has more frame rate problems, which were even an issue when playing solo. For that reason I'd recommend going with one of the other console versions.

All of the missions are location-based, and you can undertake or ignore them as you see fit. A penchant for completionism had me 100-percenting every level – as a result, I unlocked and completed the final (and underwhelming) boss battle before even stepping foot in two of the five realms. I returned to the game for another hour or two of grinding to finish everything off, but it didn't add anything to the story – or my sense of achievement, for that matter. All in all, you complete the game in an afternoon, without much reason to worry about the leftover objectives or minigames.

Perhaps my most damning criticism is Rise of the Guardians is that it isn't more fun with co-op partners. The mind-numbing gameplay left us steamrolling our enemies in silence, and didn't really speed up the combat over playing with the mostly competent AI allies. Co-op also introduced an occasional stutter in the frame rate.

Rise of the Guardians isn't entirely unpleasant, but even if you're looking for a co-op game that's safe for the whole family, you can find better options on the market.

6.5
About Game Informer's review system
Concept
Create an easy tie-in game for the five fans of the Rise of the Guardians film
Graphics
The in-game graphics are passable, but the cutscenes are the cheapest animated storyboards I've seen
Sound
The decent sound-alike voice actors don't improve the horrible one-liners
Playability
You have a number of special abilities at your disposal, but spamming the standard attack button is all you really need
Entertainment
The hack-and-slash co-op action is fun until the monotony sets in
Replay
Moderate 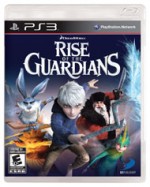