Ridge Racer is known for supporting every system launch window under the sun, but this is perhaps a new low. Those titles are usually spare affairs that look to capitalize on early adopters' desperation for software. Ridge Racer on the Vita goes a step further by giving you even less content than your standard, already bare-bones launch title. It's built on the premise that you buy post-launch DLC to fill out its skeletal roster of three tracks and five cars (with an additional set available via a free download). Sadly, that might not even be the most unfulfilling part of this game.

As if the scarcity of out-of-the-box tracks and cars wasn't galling enough, this game's hollow overall career structure means that even if it shipped with an acceptable amount of cars/tracks, it still wouldn't be enough. Everyone who turns on the game joins one of four race teams, with all accomplishments earning points that go towards the overall totals of their respective teams. The problem is that the races offer almost no variety to make them worthy of the endless repetition it takes to bolster your personal driver level or to contribute significantly to your team's total. Racing against ghost cars, one-off online races, three-lap jogs, and time trials are all you can do in this game. There is no career mode, seasons for your team, alternate racing types, or any larger draw to this title that elevates it from being anything other than a demo to a larger game that doesn't exist.

That's not to say that Ridge Racer doesn't have good ideas, it's just that they're drowned out by the bad ones. There's an upgrade tree that lets you bolster your cars' performance from three different categories, and the overall attempt to merge online and offline play with a universal identity in this game is something that most titles are moving towards. There is also the racing itself, which besides being predicated on series' trademark drift racing, requires tight finessing of the controls to wring out crucial seconds from your lap times.

If you're going to ask people to buy your content it's a good idea to make it compelling in the first place, and Ridge Racer doesn't do that. 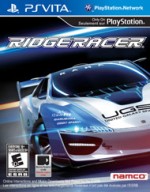 When you buy a car, make sure it has an engine in it first.

Purchase More Info
5
i
Game Informer's Review System
Concept Make people pay for DLC if they want more content beyond the game's bare selection of three tracks and five cars
Graphics The game looks and good and feels decently fast
Sound The announcer lets you know when your nitrous is ready, but that's about the extent of his usefulness
Playability Manual shifting is done on the back touchscreen while hitting the front left of the front screen engages your rear-view mirror
Entertainment The racing is tight by Ridge Racer standards and there are some good ideas here, but the content itself is sorely lacking
Replay Moderately Low