Adult Swim’s Rick and Morty is a funny show, and Owlchemy Labs’ Job Simulator is an amusing VR game. Rick and Morty: Virtual Rick-ality is the predictable result of mashing those two things together. If you are familiar with both of its building blocks, you already know exactly what to expect from this VR experience; it combines the anything-goes zaniness of Rick and Morty with Job Simulator’s core concept of interacting with nearby objects in small spaces. The result is good for a few laughs (especially for fans of the show), but it isn’t much fun to play.

You are a Morty clone confined to the garage, and mess around with with a variety of dangerous and improbable devices to help Rick and Morty. The garage’s shelves and cupboards are packed with familiar objects and references to the show. I saw microverse batteries, Mr. Meseeks, a mundane life-simulation game, and other nods that made me smile and even laugh out loud. These moments are what Virtual Rick-ality does best, giving players a chance to interact with clever (and often recognizable) gizmos. Add in some funny exchanges between Rick and Morty – both voiced by Justin Roiland, who does their voices for the show – and you have an authentic-but-small slice of the show’s universe to explore.

Virtual Rick-ality is great for “I remember that!” moments, but it is more successful as a virtual Rick and Morty museum than a game. You grab objects, push buttons, and occasionally shoot things, but nothing you do can be called a “puzzle,” since you are given explicit instructions every step of the way. From repairing computers to synthesizing matter, your progress depends on completing a linear to-do list of simple tasks. While going through the steps has funny results, the process isn’t engaging; you’re doing mostly the same stuff to slightly different gadgets and/or lifeforms for about 90 minutes.

Deviating from your assigned actions can be (but isn’t necessarily) more entertaining than following the script. You’re given plenty of free time to monkey around in the garage, so you can hop through portals, break windows, and create bizarre fusions of everyday objects. This kind of unstructured goofing around is just as central to the experience as the main story. It doesn’t feel much different, but I was often surprised and impressed to see the kinds of bizarre experiments the team at Owlchemy Labs anticipated. If you think eating or drinking something should make Clone Morty barf, it probably will.

One year after the initial launch of Job Simulator, Virtual Rick-ality doesn’t do much to expand on that VR experience; Owlchemy Labs has applied a new coat of paint to an old foundation. This game achieves its modest ambitions of letting fans to dive head-first into the Rick and Morty universe. While I enjoy the faithfulness to the subject matter, Virtual Rick-ality doesn’t have the depth or variety to make it successful on other levels.

Rick and Morty: Virtual Rick-ality is available on HTC Vive and Oculus Rift. 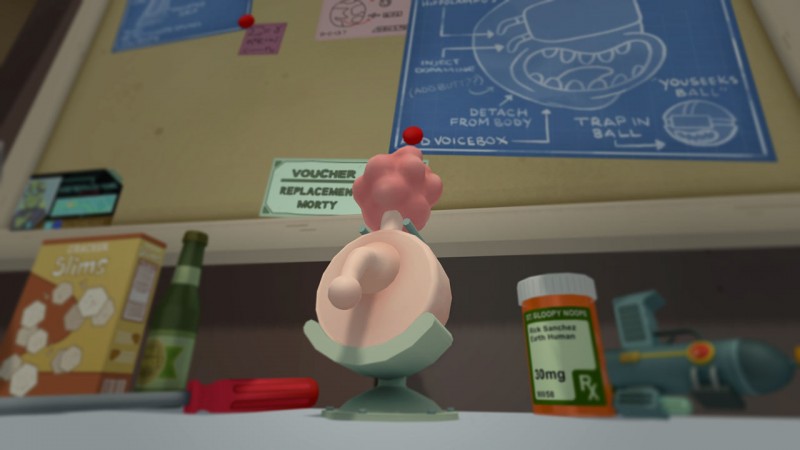 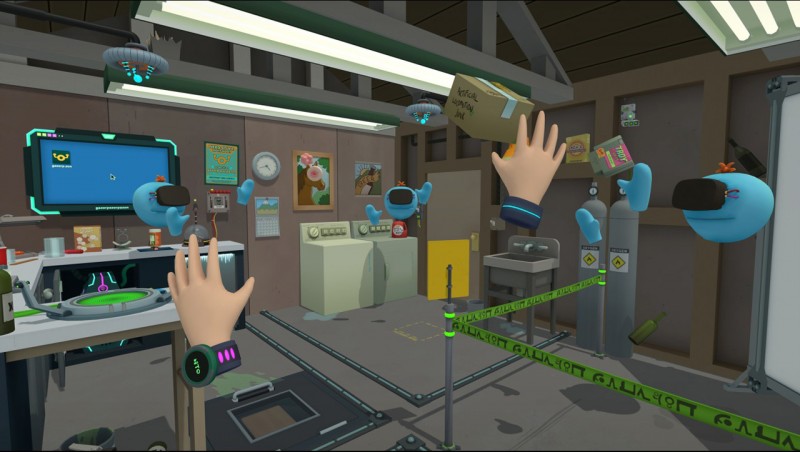 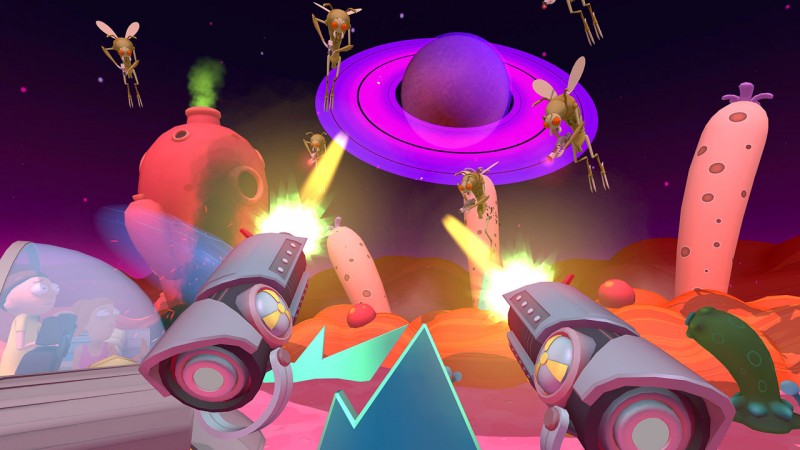 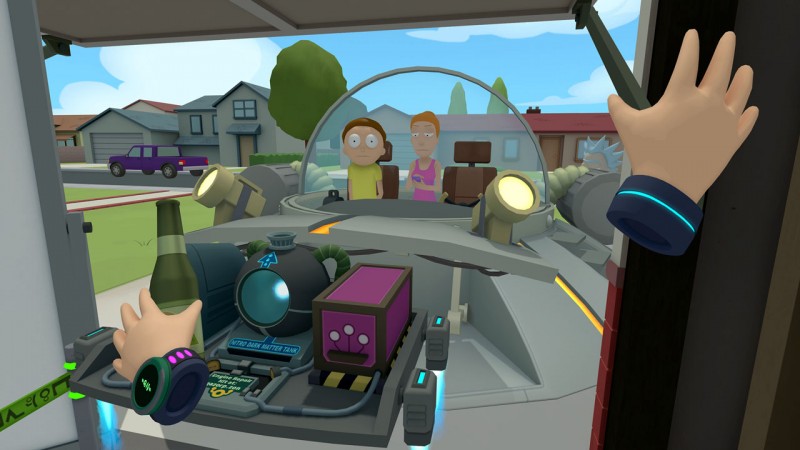 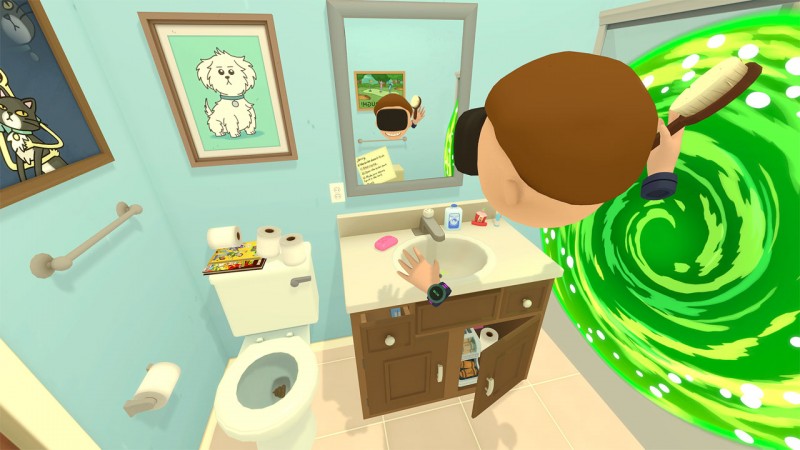 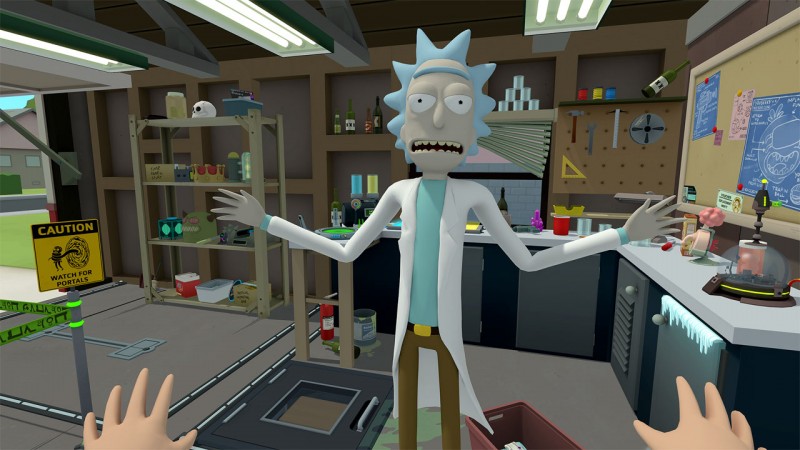 6.5
About Game Informer's review system
Concept
A garage simulator that lets players interact with familiar characters and objects from Rick and Morty
Graphics
The animated show’s visual style translates well into VR
Sound
Rick and Morty co-creator Justin Roiland voices both main characters, and the dialogue stays true to the show’s particular sensibilities
Playability
Pulling switches and pushing buttons works just fine, though grabbing things can be finicky
Entertainment
The jokes and references are funny, but the gameplay is too shallow to be engaging
Replay
Moderately Low 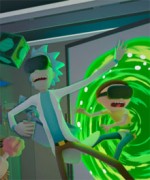