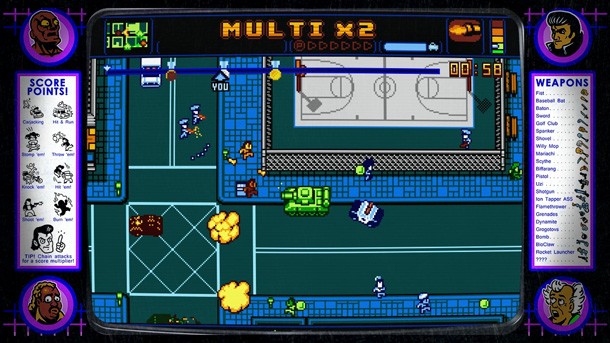 Nods to gaming’s past are in no short supply these days. Whether it’s ironic Mario t-shirts, gaming humor on Reddit, or elaborate browser-based tributes like Abobo’s Big Adventure, the 8- and 16-bit glory days are anything but forgotten. Designer Brian Provinciano began work on Retro City Rampage over a decade ago, with the vision of it being yet another love letter to the era. He has certainly succeeded in that regard, for better or worse.

Within minutes of starting Retro City Rampage, you’re bombarded with gaming and pop culture references. Obvious nods to properties like The Dark Knight, Saved By The Bell, and Paperboy occupy entire missions, although others (Married...With Children, Hogan’s Alley, Cheers) are snuck in more subtly. This aspect of the game is initially entertaining, as it plays out like a virtual Where’s Waldo of references.

A few hours into the game, the novelty wears off, but you’re still beat over the head with pop culture. Retro City Rampage might as well be screaming “Hey, remember Ghostbusters? What about Fresh Prince of Bel-Air? Man, that Zelda game was pretty cool!” Once you’re over the quirkiness and charm of its initial hours, Retro City Rampage occasionally becomes a chore to play.

Its core gameplay is clearly inspired by the first two Grand Theft Auto titles, featuring an open world littered with missions, sidequests, and pedestrians to plow through. Frequently, it mocks the format and gaming in general with jokes about boring “tail this car” missions, invisible walls, and microtransactions. Despite how self-aware the game is with its humor, the gameplay itself often features some of the worst elements of NES-era gaming.

We like to remember the Marios, Zeldas, and Mega Mans of the period, but rarely are the downsides of less-prestigious titles discussed. Inconsistent checkpoints, wildly unbalanced difficulty, and cheap boss fights were par for the course. Rather than moving away from the ugly side of the time period, Retro City Rampage embraces it.

Early objectives are relatively inoffensive, sending the player on a variety of fetch quests and wacky missions revolving around fixing a time machine. Many are unique but not exactly fun, such as one that tasks you with throwing dead bodies at a haunted car (it sounds better than it actually is). As you approach the final set of story missions, it turns into a gauntlet of cheap deaths and infuriating boss battles. One stretch involves a tribute to the awful underwater level from the Teenage Mutant Ninja Turtles NES game, a difficult Dr. Robotnik-inspired boss fight, and an extended section based on Mach Rider. If you’re enough of a nostalgia fiend to get through these levels without becoming genuinely infuriated, you’re a more patient gamer than I am. Despite my frustrations, defeating the final boss gave me a feeling of triumph that’s been difficult to duplicate in more recent generations of gaming.

I loved Retro City Rampage at first. It seemed like a fast-paced and funny reminder of one of my favorite eras of gaming. As I dove deeper, I realized that better alternatives exist. If you want a healthy dose of NES nostalgia, the free Abobo’s Big Adventure is fantastic. If you want to re-experience GTA’s introduction of the open world genre, download the classics on PSN. Retro City Rampage is a noble effort and a labor of love, but the final product reminded me of my most frustrating gaming memories just as frequently as my fondest.

7
About Game Informer's review system
Concept
Make a game with every ‘80s and ‘90s reference you can think of
Graphics
The core style doesn’t emulate any specific game, but it’s distinctly 8-bit
Sound
A fantastic soundtrack does a great job of mimicking the era’s tunes
Playability
Major balancing issues rear their head late in the game, but most of it controls admirably
Entertainment
This look back is equal parts fun and infuriating
Replay
Moderate 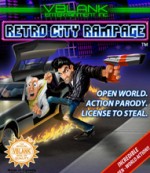