A purification tower called Basel stands high above a polluted land, supporting entire cities built upon its many levels. Based out of a mid-level town, your team of adventurers complete random jobs for whoever will pay. Sometimes you’ll do important tasks like getting the power back on, but many quests involve indulging the upper class Cardinals in their absurd whims. Throw in fetch quests from townspeople, and you’ll feel like you’re a simple errand boy risking life and limb (and elevator overexposure) for things like scrap metal or a bottle of wine. However, it’s more about the battles than the job-to-job motivation in Resonance of Fate.

In this steampunk world, guns are the weapons of choice. In the spectrum of RPG battle systems, this one leans more in the action direction, allowing characters to move freely before firing. Machine guns take off temporary scratch damage, while handguns do permanent direct damage; softening foes up with scratch damage before dealing direct damage is the only way to succeed. Hero actions allow you to draw a line on the battlefield that your character will dash along while firing away at pre-selected targets. This is where you’ll see fancy signature flips and slides, and also deal some heavy damage.

While it’s easy to spam this move (and a triple team-up version) on standard enemies, dungeons are full of powerful foes and tricky bosses that require a strategic approach. You’ve got to consider taking apart armor, finding elemental weaknesses, and whether you should take down henchmen first or go straight for a leader kill (which ends the battle instantly). Of all the tactical considerations, the most important is how you spend your hero actions. If played smartly, hero points will replenish themselves throughout battle, but you’ll run out if you’re too haphazard. This leads to an extremely weakened state and most likely death.

As I played through the game, my feelings for the battle system were all over the place. At first I was confused by it. When I grasped the flow, I felt like a badass gunslinger. Then I’d hit a nasty boss or new enemy type that made me feel like I hadn’t learned anything at all. After some trial and error and plenty of grinding, I’d figure it out and feel like the smartest tactician alive. The latter two steps kept going back and forth again and again.

After the thousandth time you’ve seen the characters fly, twist, and shoot through the air, it’s lost all sense of excitement and style. Eventually, battles are either extremely frustrating or so easy that you’re just going through the same old boring motions. You’ll fight through a lengthy dungeon with no problems at all only to meet a boss that’s twice your level. Then you’re faced with the decision of either slamming your head against a wall trying to figure this monster out or escaping to work on building your advantage. The latter option must be weighed against the fact that you must slog through the entire boring and easy part of the dungeon again if –you –leave.

Outside of dungeons, Basel’s overworld consists of many flat platforms scattered up and down the tower. Every platform’s surface is covered in hexagons, and you must place pieces across the land like Tetris blocks before you can transverse it. You can try to make a skinny path straight towards your next crucial objective, but you’ll uncover hidden items under some hexes and receive the handy ability to warp back to your base if you clear an entire platform. It’s tempting to blow through many of your hexes on a new area trying to find the most cost effective way to fit them all together, but keep in mind that you’ll be stuck grinding for hexes in the next chapter if you don’t hold on to a few. It’s especially disheartening when you’ve been mowing through a critical path dungeon in which the enemies don’t drop hexes at all. I spent too much time in late-game gathering pieces to gain access to that next elevator or crucial towns. It’s much more fun earlier on when hex pieces are constantly flowing and you’re clearing wide swaths of land at a time.

This puzzle mechanic extends to gun customization as well, albeit with fewer complications. I enjoyed snapping on as many attachments as my guns could stand, including things like triple barrels and five scopes. While this looks ridiculous on the customization screen, these changes fortunately aren’t cosmetically represented in battle. On the down side, there is no direct stat comparison for the various guns and parts in the shops or menus, so I found myself angrily writing down notes on various items. Why are these painfully archaic mechanics still happening in 2010?

Also be aware that this game is extremely wacky, only moving in a more serious direction later on. The worst offender is horndog team leader Vashyron, who has no bones about expressing his love for looking up skirts and cartoonishly ogling big-chested women. Fortunately, cinematics are doled out sparingly within the game’s chapters – if it’s not your thing, you can bypass it easily.

Overall, Resonance of Fate may appeal to the JRPG connoisseur who is looking for an interesting and challenging new take on combat. Others most likely will be thrown off by the silliness, steep learning curve, required grinding, and other pains – especially when there are so many recent well-rounded RPGs out there.

6.75
About Game Informer's review system
Concept
Blend a traditional JRPG with John Woo bullet ballet
Graphics
The Basel tower’s unique look is undercut by boring, repeated battlefield design
Sound
These poor voice actors do their best with the stunningly strange dialogue. The score impresses at times, but endlessly repeating tracks in some areas will grate on you.
Playability
The steep learning curve will slam many casual players
Entertainment
A push and pull of being hooked and frustrated
Replay
Moderate 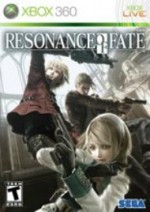