The Resident Evil series is filled with failed offshoots – from a light-gun game that doesn’t support light guns to a miserable Game Boy Color title. You can now count Operation Raccoon City among these missteps. SlantSix’s attempt to merge the iconic Raccoon City outbreak with intense third-person shooting is rife with buggy AI, debilitating glitches, and sloppy gameplay.

Operation Raccoon City puts players in the roles of Umbrella operatives on a mission to eradicate all evidence of the evil pharmaceutical company’s involvement with the outbreak. The brief 4-player co-op campaign takes players on an uninspired tour through Raccoon City landmarks like the police station and underground laboratory. How SlantSix managed to make such iconic settings look so generic is beyond me. Simply blasting away zombies and mutated monsters with friends is a decent time, but attempts to mix up the gameplay fail miserably. A bumbling chase sequence early on is filled with frustrating quicktime events and inexplicably forces you to run backwards. Another lazy encounter involves the famously fleet-footed Nemesis staying put in the middle of a huge warehouse while you pepper him with bullets from behind cover. From the rocky start to the laughably disappointing ending, the attempted fan service ends up making a mockery of the franchise’s fiction.

Unlike most games in the series, Operation Raccoon City focuses on fast-paced gunplay on the overrun streets of Raccoon City. Aiming your shotgun or assault rifle at zombies’ heads feels solid, but nearly every other element of gameplay is lacking. The automatic cover system is clumsy, often forcing you in or out of protection at inopportune times. The stiff melee combat is so underpowered it’s nearly useless. The same button is used for swapping weapons and reviving teammates, making it a nightmare to resuscitate comrades bleeding out on a pile of assault rifles. The human AI is somehow more brain-dead than the shambling corpses. I’ve seen teammates run headlong into laser mines and enemy soldiers practice power squats behind cover or straight up ignore me.

The game is only marginally improved by hopping into versus mode and replacing the mindless AI with actual humans. My favorite multiplayer mode involves blasting your way to a rescue helicopter in an attempt to secure a trip out of the doomed town. However, modes which require even an ounce of strategy, like team deathmatch or a capture-the-vial mode, fall apart due to the game’s inherently chaotic environment. I found no joy losing a heated firefight because a stray zombie grabbed me, forcing me into an analog stick-waggling quicktime escape. Some may enjoy the overwhelming bustle of the battlefield, but the entire experience just feels like a crowded mess to me.

A basic XP-based progression system allows players to buy new weapons and upgrade class-specific abilities like sticky grenades or cloaking. While unlocking a new shotgun or machine gun is great, the unimaginative skill upgrades didn’t change the core gameplay in a noticeable or satisfying way. For example, the sticky grenade starts with a five-second fuse, the second upgrade drops it to two seconds, and the third upgrade brings it back up to three seconds. What?

Umbrella may have filled Raccoon City with horrific creatures, but SlantSix has tainted the fabled town in its own way. It’s difficult recommending a return to Raccoon when you have to endure buggy AI, clunky gameplay, and terrible glitches like disappearing floors. Yes, on more than one occasion my friends and I had to ditch whole missions because we kept falling into an empty void. Not even online play is enough to of a reason to warrant checking out this botched experiment with the Resident Evil brand.

6
About Game Informer's review system
Concept
The developer of SOCOM infects Raccoon City with shoddy gameplay
Graphics
Most of the character models look great, but the environments are generic and boring
Sound
The sound effects fit in with the series, but this is one of the least compelling Resident Evil scores of all time
Playability
Shooting feels alright, but pretty much everything else is a clumsy mess
Entertainment
Shooter fans will be disappointed by the messy gameplay, and the sloppy handling of the Resident Evil lore is bound to upset fans
Replay
Moderately Low 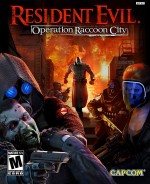