Few opening acts scream reinvention more than Resident Evil 7’s. Instead of pumping lead into zombies and creatures born of man-made viruses, the player is isolated and hunted by a deadly apparition. The series has always relied on scientific explanation for its grotesqueries, but with objects moving on their own and ghostly beings flashing in and out of reality, the introductory moments are clearly supernatural – or that’s what Capcom wants you to believe. The first taste of this adventure doesn’t embody Resident Evil; it feels like a new experience designed to feed off of player senses and fears in a different way. The atmosphere is tense, unsettling, overly gory, and makes for a hell of a beginning to a game, especially when you see how it all comes together.

The scares are viewed through the eyes of Ethan Winters, a middle-aged everyman summoned to a run-down estate in Dulvey, Louisiana, to search for his missing wife, Mia. The invitation comes in the form of a VHS tape showing Mia, who has been missing for three years, alive but distressed. The game roars out of the gates with a big emotional hook, as well as a high level of ambiguity as to what's happening in Dulvey.

The narrative unravels quickly, however. Ethan fades into the background, doing little to establish a connection to his world. His personality is as transparent as the specters he encounters, and he somehow remains mostly silent in the face of huge, life-altering events. Capcom may have wanted the player to react to these events instead of Ethan, but he’s involved enough in the story that it feels like big chunks of dialogue and exposition are missing, especially when he verbally reacts to inconsequential things like a wall covered in millipedes, but doesn’t say anything when he or people around him are in danger. The story ends up being more voyeuristic and about the people of the estate than your protagonist’s personal stake in it. The story flow suffers from the lack of Ethan’s input; I thought the game glitched out when he didn’t react to a huge event in the game’s first hour. It turns out he just had nothing to say – no reaction whatsoever. Thankfully, Mia is a powerful force in this tale, and as we get to know her, the world also comes into shape. By the end of the game, Ethan is reduced to little more than a pair of hands holding a gun. Much like any Resident Evil game, the adventure isn’t just contained to one location, but the bulk of exploration unfolds in the estate, which belongs to the Baker family, a rowdy mishmash of personalities that range from a hillbilly father and verbally abusive mother to a comatose grandmother and a son who is as deranged as The Joker. The Bakers take center stage, and are equally important to the story as they are to re-establishing Resident Evil’s traditional conventions and lore. None of these characters will likely be remembered as Resident Evil greats, but they are interesting in their own disturbing ways. The threat they pose is greater than their personalities. The powers they wield are also interesting, and they are constant threats. Much like the Nemesis from Resident Evil 3, these characters appear over and over again, even when you least expect them. Don't trust walls; they crumble easily in this world.

The opening act, while powerful and different, is a smokescreen of sorts that gives way to an experience that draws heavily from the original PlayStation 1 Resident Evil titles. Navigating the estate begins with jump scares, but eventually gives way to one locked door after another. The act of opening doors may not sound like much fun, but the exploration and gameplay that leads to the securing of items is rarely mundane or repetitive. I had fun with most environmental navigation, even if some of it is ludicrous in design. In classic Resident Evil fashion, the house's architecture doesn’t make a lick of sense. The player is forced to hunt down keys, find animal-shaped objects to insert into mechanical devices, and scour the environment high and low to find healing items and ammo. You even find yourself thinking long and hard about inventory management every step of the way, questioning when to bring extra firepower, healing items, or that damn crank that somehow makes it into every Resident Evil game. Again, this sounds tedious, but it isn’t. It just makes you nervous about your odds and readiness for the next step of the game.

The discovery process is excellently crafted, as is the house, and the switch to a first-person perspective allows Capcom to make finding items more interesting, as an object of interest may be obscured from view at certain angles. Part of the fun of the house is getting to know the Bakers from their possessions and hobbies. The weirdest bit of fiction is Capcom insisting the player should know the Bakers love football, not just from references in the house, but by turning bobblehead football players into one of the game’s collectibles. It’s always jarring to see a vibrant, purple bobblehead toy sitting in a room full of gore.

Ghostly events occur periodically in the second act, which is the bulk of the game, but the focus is more on exploration and combat. I won’t spoil exactly what you are doing, but a steady hand with a pistol is a necessity for headshots, as is the wherewithal to know when to bring out more powerful firearms like a shotgun or grenade launcher. The enemies are nicely varied, as are the bosses, which require different strategies and are usually spectacular in appearance. Don’t expect combat every step of the way; you fire fewer shots in this game than any other Resident Evil. That shouldn’t be taken as a complaint, however. The gunplay is nicely polished and fits well into the context of the world. Only one combat-based encounter is problematic, mostly because progress isn't clearly communicated. All you know is you have a chainsaw, and it cuts flesh, but it doesn't get the job done quickly. This fight led to several "game over" screens as I searched for solutions.

Capcom fills any lulls in the action with interesting gameplay deviations and scenario designs, such as stealth sequences where you have to avoid a Baker, or enemies populating previously explored areas. When you are low on ammo, seeing an enemy in an area you thought was safe ups the intensity damatically. You can tell a lot of thought went into balancing this adventure, both to be challenging and fair. Save points are littered liberally throughout the house, and checkpoints are also offered so little progress is ever lost. This is one of those games where progress is always rewarded with new things to see or do, whether that’s something small like the discovery of walls coated in mold or a big development like playing as a different character for stretches of the game.

Any concerns I had of Capcom deviating too far from Resident Evil’s universe were wiped out by the time the credits rolled. I love how the ghost story is integrated into the series’ lore. Yes, this game eventually goes deep with its scientific explanations. It’s a slow unveiling of information that sets up the series nicely for future installments.

Capcom has successfully reinvented Resident Evil in the past, the most notable deviation being the brilliant Resident Evil 4. This new vision doesn’t reach the same heights of spectacle and gameplay innovation as that breakthrough release, but is a welcome addition to the series (both in terms of gameplay and lore), and a nice entry point for newcomers.

Horror Enhanced by VR?
The PlayStation 4 version is equipped with PlayStation VR functionality, allowing players to experience the same game from a more intimate perspective. As much as I enjoyed seeing this world up close and personal (not to mention aiming through head tracking), the VR integration is riddled with issues. Unless you play the game from a standing position to manually turn your body, your best option from the sitting position is to use set angles for turning – meaning your character turns 30 degrees each time the analog stick is tapped. It’s a clunky way of moving through the world, but it likely won’t make you sick. The alternative is to turn on smooth movement, which allows you to turn freely by pressing the right analog stick. This option didn’t sit well with me. Every spin made my stomach churn. No variations in rotation speed alleviated the sensation that something wasn’t right. Basically, play it standing, or don’t play it in VR. 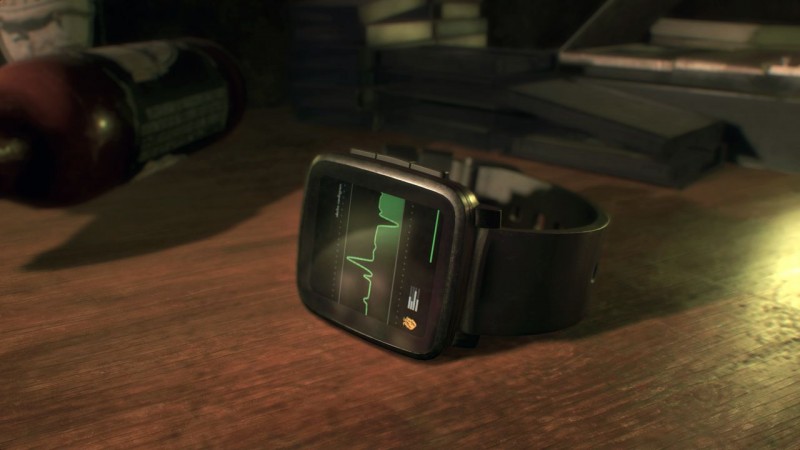 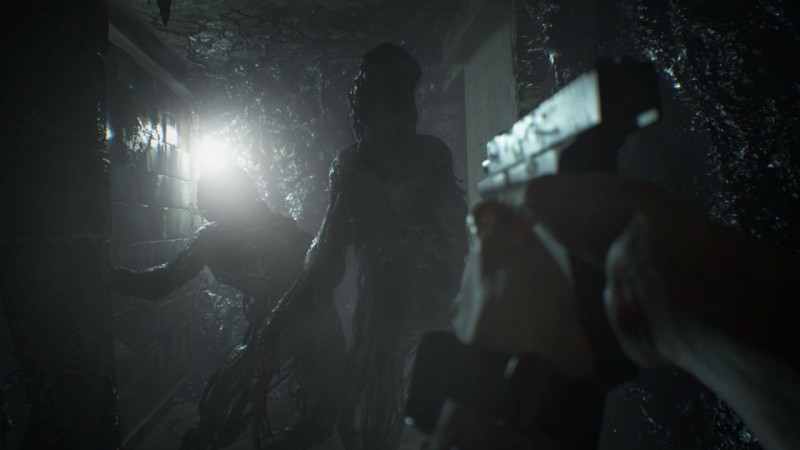 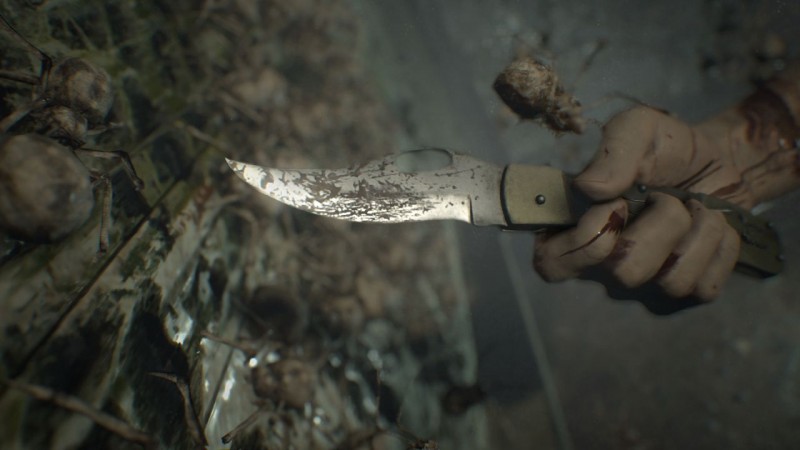 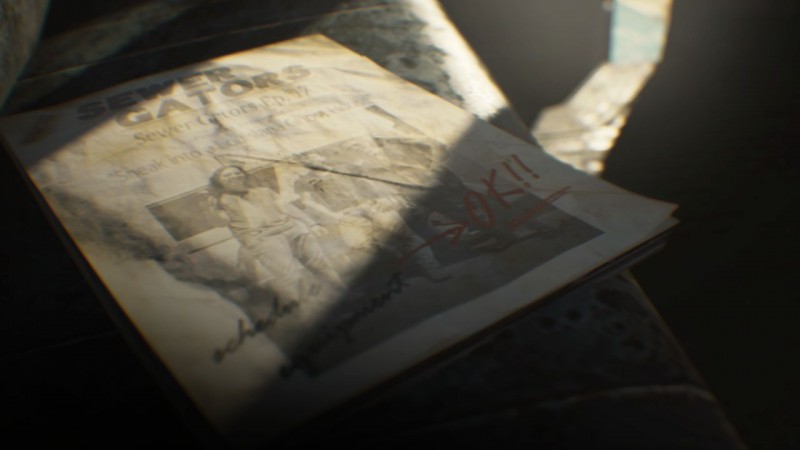 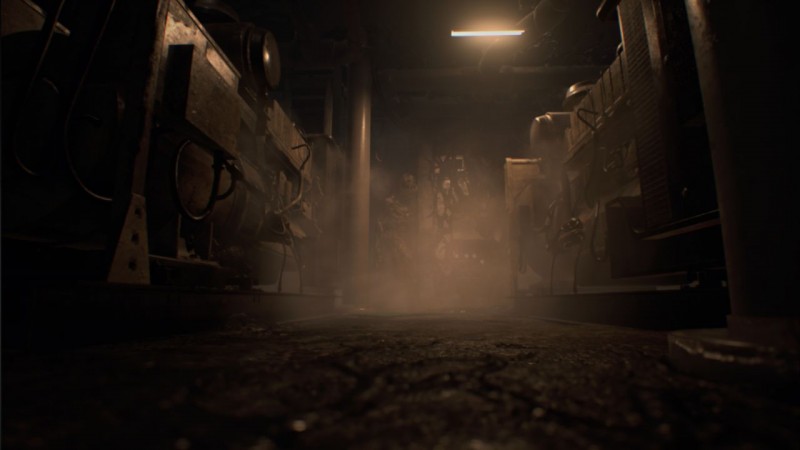 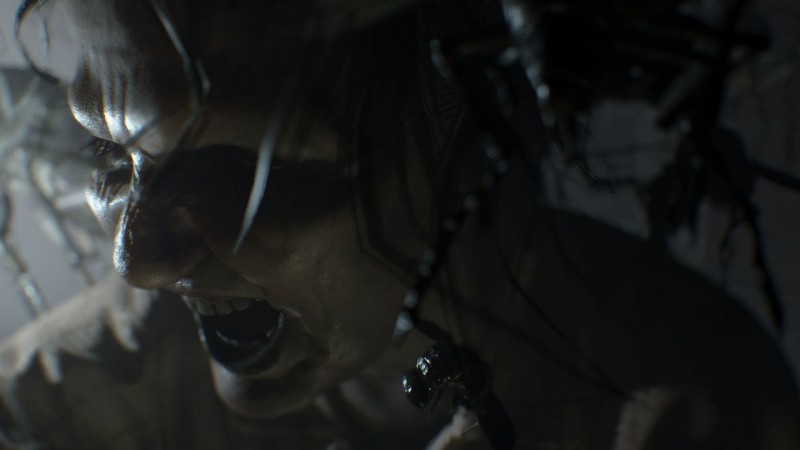 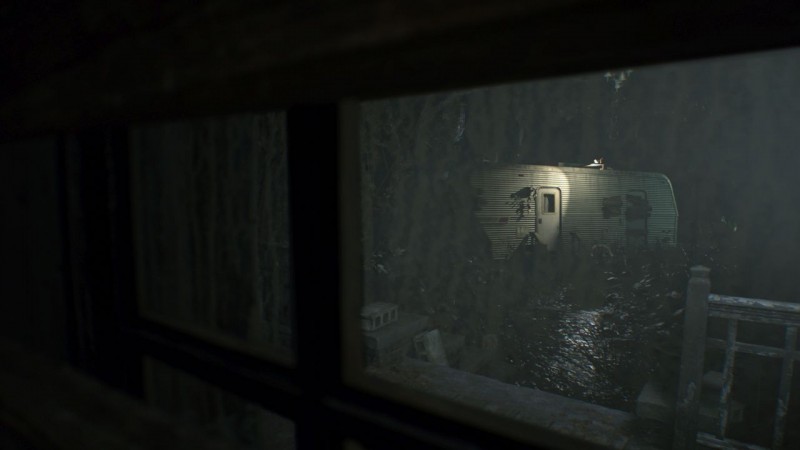 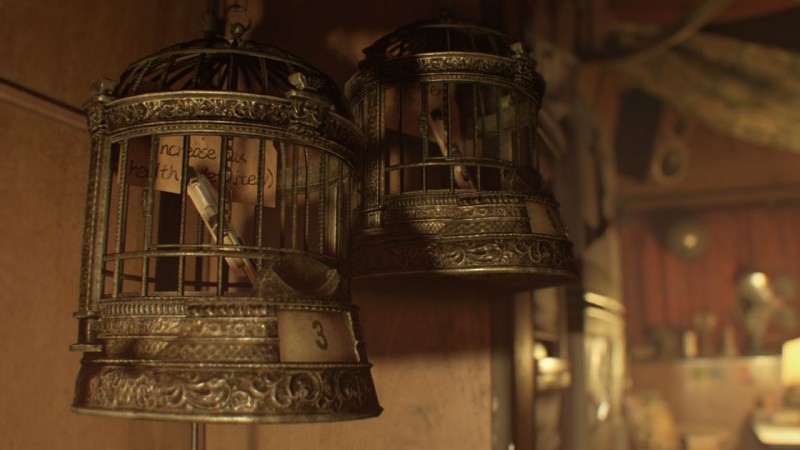 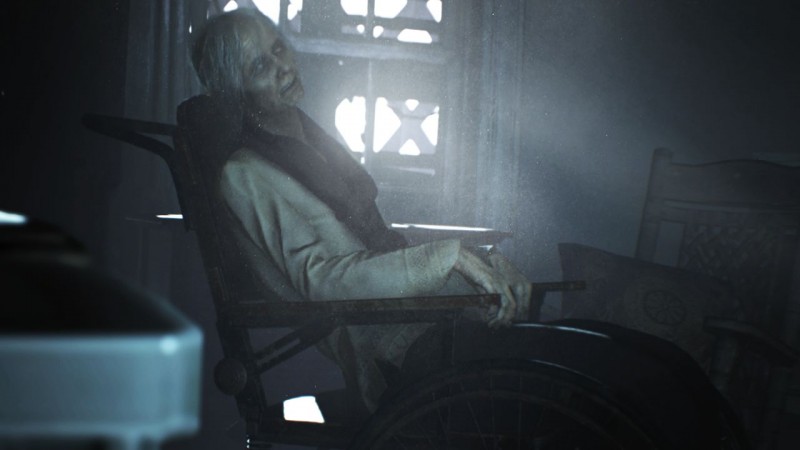 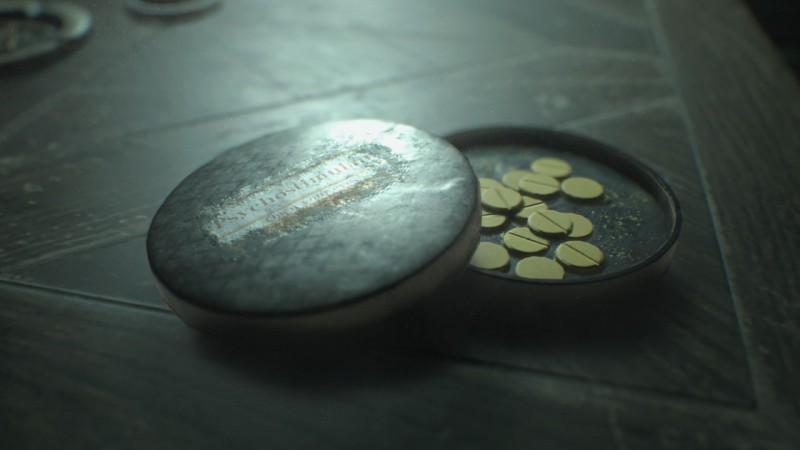 8.5
About Game Informer's review system
Concept
Begins as a radical reinvention for the series with first-person exploration and supernatural themes, but ends up being the same Resident Evil we know and love, with locked doors, headshot-heavy combat, and science galore
Graphics
Beautifully disturbing. Capcom isn’t afraid to show off its picturesque environments and intricately detailed characters
Sound
A lack of sound is used brilliantly to up the tension. Any creak or thud puts you on alert. Ethan doesn’t say much, but his voice work (and the collective casts) is solid
Playability
An excellent mixture of exploration and gunplay. The feeling that every bullet matters is constantly hanging over your head
Entertainment
This game has fascinating secrets to tell, and is continually fun to play. Learning how this entry connects to the series is more than enough reason to play
Replay
Moderate