Developer Camouflaj’s episodic saga Republique may be rolling out at a snail’s pace (four to six months between entries), but the pacing works for the small team with big ambitions for the mobile space. Having time to rest between episodes builds anticipation and removes fatigue that could potentially set in if they were played back to back.

Episode 3 opens with our hero, Hope, closer than ever to escaping Metamorphosis. She sees a way out and only needs the proper clearance to use it. Along the way she encounters Mattie Sade, the drunk editor-in-chief of in-house propaganda rag The Morning Bell. Sade helps her get what she needs, but uses darker methods than Hope is comfortable with.

New upgrades you can buy in the shop include adding enemy locations to the map and a radio scrambler that distracts foes into stopping and checking their equipment while you sneak past. Some Prizrak soldiers are now equipped with sleeping gas grenades that they can toss across the room to stop you in your tracks immediately. Hope’s arsenal expands with the new proximity-based sleep mine, which she can plant in an enemy’s path to knock them out.

Despite these additions, the core stealth gameplay is largely similar to past episodes. You watch the patrols from a variety of security cameras and tap to guide Hope from cover to cover. Sometimes I appreciate her automatic movements around corners or deeper into cover to remain hidden from approaching enemies. Other times, it goes horribly wrong and she runs right out in front of them without me touching anything, and I lose resources and or get sent back to a checkpoint through no fault of my own.

The Terminus area of this episode is an impressive-looking circular central hub with several paths branching out. It feels bigger than previous locations, though the layout makes prevalent backtracking unavoidable.

The new puzzle involves collecting potential blackmail evidence from remote Prizrak homes outside of the compound and turning it into a news story that smears the subjects in question. I enjoyed hearing the human side to these faceless goons and felt guilty about ruining their lives. As a puzzle, however, matching a damning image with out of context quotes was too easy. I tore down their reputations without a problem. While Watch Dogs and Republique were in development at the same time and both teams probably happened upon the camera hopping idea independently, searching for dirt inside someone’s place via in-home cameras feels a little familiar if you’ve played Ubisoft’s open world game earlier this year.

The overall storytelling of Episode 3 is the strongest so far. The ending especially strikes a chord, and has left me more intrigued for the next episode than any of the previous cliffhangers. As Republique approaches its final two episodes, it needs to nail all three pillars of story, stealth, and puzzles to succeed. If one or two come up short, the whole thing will come tumbling down. 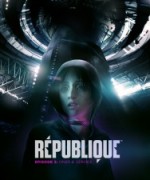 Republique steps up its storytelling at the midway point, but other problems persist.