Over four months after the first episode’s release, République returns with the next entry chronicling protagonist Hope’s stealthy quest to investigate and escape the confines of an oppressive regime. Episode 2 features a new area of the Metamorphosis base, and additional powers and enemies, but most of the core gameplay mechanics remain unchanged.

Things pick up immediately after the cliffhanger ending where it seems our heroine is busted. As you probably figured, all is not lost for Hope. You are immediately back to zapping between security camera perspectives, scanning the environment with Omni vision, and tapping the screen to tell Hope where to sneak next. These core mechanics, for better or worse, remain unchanged from the last episode. The unique, custom interface works far better on touch screens than most attempts, but it can get tedious to constantly change the camera angle to get a good view of the action, puzzles, or simply the door you’re trying to get through. Tapping the screen to direct Hope works fine 95 percent of the time, but sometimes she will take cover against the wrong side of a pillar or walk right in front of an enemy to get where you’re telling her to go. Getting captured for these rare pathing errors is no fun, but after a warm-up period you can learn to avoid potentially risky strategies and play it safe around enemy soldiers.

Shaking things up this time are new ARC Prizrak enemies that have taser-proof armor and randomized patrols. You can’t simply watch their routine and sneak by when you know they’re going to stop and look at a plaque. The difficulty in any room ramps up with these unpredictable guys. However, hiding in some plants and waiting until they leave is easy enough in most cases. If you’re not patient enough to wait them out, you can always use the new patrol prediction Omni power to see a yellow line of their upcoming route. Another power allows you to see Prizrak through walls, handily preventing a surprise strike from around the corner. These new tools are helpful, but not vital. So if you’re not interested in finding collectibles and turning them in for cash to buy the power-ups, you won’t have a problem reaching the end of the episode.

A new series of puzzles shakes up the frequent stealth sections. These strike a nice difficulty balance, neither too simple nor progress-halting, and feel like they fit in the world (one smartly integrates the villainous Overseer’s backstory). Perhaps my favorite addition is the new map that makes the world far easier to navigate. The camera swings in and out of place so you’re properly oriented when you return to gameplay. My only wish is that you could leave markers when you come across special items that can’t be accessed until later.

Story is a major focus in République, with tapes, videos, and emails allowing a deeper look at what’s going on for those interested. Hope is still trying to escape the Metamorphosis compound and meet up with the resistance-friendly Librarian along the way. Standard themes of book burning and freedom suppression return. The one main event in the episode feels less impactful than it could have been, though; the build-up could have been stronger with more character interaction along the way (key players rarely speak face to face), and a willingness to go beyond the PG-13 rating (12+ in iOS) might have made a difference. As in the first installment, when Hope is caught, she’s peacefully escorted to a holding room, and you immediately break her out. The feeling of dread is blunted by the lack of consequence. The final scene feels a little too similar to the end of the first episode, after which we saw Hope escape easily. So why should we believe that she’s really in danger again?

Despite my thoughts on Episode 2, I’m eager to see if the next installment of République changes things up in the environment and opens up more of the overarching story. This series still has plenty of exciting potential, and I think Camouflaj and Logan Games have what it takes to nail it in the end. 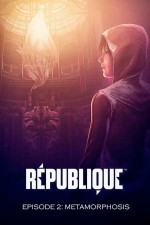 Over four months after the first episode’s release, République returns.

Purchase More Info
7
i
Game Informer's Review System
Concept Continue Hope’s journey to escape the Metamorphosis compound
Graphics A new library location feels less clinical than previous areas
Sound The voice cast continues to turn in strong performances
Playability Hope still doesn’t do exactly what you want her to every time
Entertainment New puzzles and powers spice things up, but this won’t change the minds of those who weren’t sold on the first entry
Replay Moderate