By the time you reach the end of Red Steel 2, you feel unstoppable. Is a huge dude coming at you with an equally super-sized maul? No problem. Use your Matador ability and gracefully sidestep his charge, slashing his now-vulnerable back to ribbons. What, three ninjas think they can swarm and overwhelm you? Using the Cobra, you quickly paint your targets and methodically blast each one apart with your revolver. Even a minigun-wielding opponent is no match for the mysterious hero, Hero. Channeling the power of the Bear, you slam your fist into the ground and charge at your stunned prey. Red Steel 2’s combat is challenging and interesting for those who take the time to learn its nuances. Wagglers need –not –apply.

When Ubisoft Paris approached a Red Steel sequel, they wisely shifted away from the bland Asian gangland setting in favor of something a bit more fantastical. Red Steel 2 is set in a bizarro Nevada, where the old West has fused with the far East. Hero, the sole remaining member of the Kusagari clan, has returned from exile to find his home in ruins. At first, he starts his quest for revenge by focusing on the Jackals, a low-life band of scavengers, but he soon learns that the rival Katakara clan is after him and his –legendary –sword.

Ultimately, the story is just an excuse to put a gun and a sword – legendary or otherwise – in players’ hands and set them loose. As one of the first games developed exclusively for WiiMotion Plus, Red Steel 2 has a heavy load to bear. Does the peripheral live up to the hype and deliver 1:1 controls, or at least a close approximation of sword-swinging action? While I’ve never handled an actual blade or fought against a pack of thugs, I’ve been known to swing a stick or two in my day. Even if they’re not completely true to life, Red Steel 2’s controls are responsive and deliver a deeply satisfying experience. It clicked for me the first time I saw a Jackal slicing down at me. Instinctively, I blocked horizontally and his blade glanced away harmlessly. Pointing my Wii remote at the screen, I then ventilated him with a few well-placed shots. Some of the more technical maneuvers require button presses and odd combinations, but the fundamentals of using a sword offensively and defensively are intuitive enough to be picked up by just about anyone. As Hero advances through the story, he learns new moves from his mentor, Jian. They include a variety of finishing moves and attacks designed to take enemies by surprise in various situations. If an opponent is armored, you might block his first few attacks and then counter with a metal-smashing Crush attack. If Hero is surrounded, a quick use of the Storm will unleash a cyclone of death. By the end of the game you will have accrued enough of these versatile attacks to handle just about anything the game can throw at you. Weapons and armor can also be leveled up, giving the sword more damage or adding special properties to guns, such as ricochet shots.

The combat is so good that it deserves a better game. Missions are doled out in a boring bulletin-board system, and the majority of the sidequests are the same throughout the game. Tearing down wanted posters and hacking into transmission towers by pressing huge yellow buttons isn’t that interesting the first time, and it’s decidedly less so the third or fourth. Some of the environments are gorgeous, particularly in the beginning of Hero’s quest. As the game drags on and players start spending more time in featureless caverns and canyons, it gets to be a bit dull. The same goes for the enemies. There just isn’t enough variety in their ranks to keep things fresh.

Fortunately, the good parts in Red Steel 2 are quite good. The combo system is flexible and offers room for experimentation. You can take on a crowd of ninjas and Jackals and decide precisely how you want to take out each one. Sure, you’ll be battling the same types of enemies in a few ugly venues, but the day that telekinetically pushing bad guys into explosive barrels gets old is the day I hang up my hat and sheathe my sword.

8
About Game Informer's review system
Concept
Play as a gun/swordslinger in a world where the wild West meets the far East by way of The Road Warrior
Graphics
The Japanese-inspired areas are gorgeous, but some of the other settings are bogged down in a dreary sameness
Sound
Music is catchy and powerful, with the Ennio Morricone influences you’d expect to hear
Playability
There’s a lot of depth to the swordplay if you’re looking for it, and the game does a great job of easing players into combat
Entertainment
Anyone who has ever swung an imaginary sword around their living room should give Red Steel 2 a shot
Replay
Moderately low 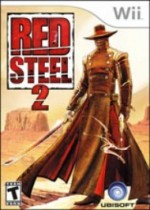