The Red Faction series is built on the promise of destruction. For the two games that appeared on PlayStation 2, the execution of said promise was tempered by the technological constraints of the hardware. The highest destructive capability empowered the player with the ability to tunnel through dirt and rock.

Red Faction: Guerrilla approaches destruction in a different way. In this experience, players do not tunnel through the underbelly of Mars. In fact, they can't upturn one piece of dirt. The ability to dig holes is replaced with the power to destroy ­buildings. The technology behind this ability is far beyond anything you've seen in a game before; it's one of this generation's most significant technological breakthroughs. None of the chaos is scripted. When a building falls, a cloud of smoke doesn't mask its collapse. A rocket blast to a wall doesn't create the same hole each time.

All of the destruction is governed by the laws of    gravity and engineering. Every component in a building – whether it's a concrete wall, a metal girder, or glass ceiling – has mass. When you pick away at the base of a skyscraper with a sledgehammer, you'll hear creaks and moans as the weight shifts to the remaining supports. If you ascend a tower overloaded with weight, you'll see the floors buckle from stress. Eventually, gravity and physics take over to cave in or topple the structure. The resulting spectacle is amazing. The screen shakes violently as concrete, steel, and glass tumble and collide, turning a once pristine workplace into a junkyard of debris.

The destructive magnitude doesn't just deliver chaotic eye candy, it creates an entirely new gaming experience. For someone who has developed the instinct to automatically shoot red barrels, playing the role of a demolition man is a riot, especially when reckless abandon is applauded. You can drive trucks through buildings, or tap into a lethal arsenal to mangle metal beyond recognition. No game has come close to empowering the player with this level of destruction. As the game goes on, developer Volition finds ways to push the chaos, and make your jaw drop further.

Remote charges allow you to sculpt explosions like an artist with an eye for urban landscaping. Singularity bombs and rockets create unpredictable (albeit awesome) messes. My favorite approach is to use a mech outfitted with jet boosters. Wildly flailing its arms through a building sends bodies and metal flying through the air. Landing the walker on a building is also quite amusing, as it often weighs more than the roofing, which results in the mech taking an express elevator to the lowest level.
As you destroy Mars' civilizations, you'll be aiding protagonist Alec Mason's mission of liberating the red planet from the Earth Defense Force, a corrupt regime that once freed the planet of the evil Ultor Corporation, only to become evil itself. As you tear down buildings, EDF's standing in the world is reduced, meaning fewer troops to deal with in future missions. The feeling that you are overthrowing an empire is strongly conveyed, giving the player that extra push to crush every EDF possession, even their trashcans.

The game's economy is also nicely tied to the destruction. Fallen structures leave behind salvage that Mason can unload for new weapons and armor upgrades. With new weapons being introduced periodically throughout the story, this system does a good job of pushing the player to veer off of the story to take on side missions and explore the vast open world. Unfortunately, the boundary separating the critical path and side content is blurred, mostly due to the game's transparent objectives and character motivation. That's not to say that the missions lack excitement. Most are built on the premise of destruction. The gunplay, which is an integral part of this experience, also packs a satisfying wallop.

The single-player campaign is lengthy, and continually rewarding. Don't be surprised, however, if you shun this experience for multiplayer. Wrecking Crew mode is the most enjoyable controller-passing game that I've come across since Burnout's Crash mode. The goal of this mode is to tally as much destruction as you can. Your friends then have to try and beat your score. On top of this, Red Faction offers 125 ranks worth of depth in its competitive multiplayer. Deathmatching in destructive playgrounds is a powerful proposition that changes the tactics of war. Why bother with a headshot when you can drop a bridge that kills five? Being able to change classes mid-match through backpack pick-ups is also a cool idea that works well with the team-based modes.

No matter what mode you enter, Red Faction: Guerrilla delivers on its promise of destruction, and offers an experience unlike anything else out there. 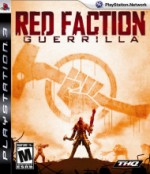 Red Faction: Guerrilla
Purchase More Info
9
i
Game Informer's Review System
Concept Obtain liberation through destruction. The different means to which players can destroy objects is one of this console generation's most impressive shows
Graphics Even if I was getting shot up, I had to stop in my tracks to admire a ?building ?collapsing
Sound Sounds are effectively used to enhance the carnage. The pounding will give any surround sound setup a workout
Playability The explosive gunplay is polished and precise. Vehicles control well, but the bland terrain doesn't offer much in terms of exciting travel
Entertainment Missions don't offer much build up or variety, but these are minor complaints in a game that hits you over the head with its destruction
Replay High