When Mega Man creator Keiji Inafune and development talent from the Metroid: Prime series get together, you can expect plenty of platforming, exploration, and robot animals. Unfortunately, any hope of ReCore being the ultimate Mega Man/Metroid hybrid proves as farfetched as Joule's mechanical companions. While ReCore's gameplay foundation is mostly solid, a host of technical and design issues stand ready to hinder your progress and your enjoyment.

I was pleasantly surprised by ReCore's opening hours, mostly thanks to the intriguing sci-fi premise. You play as Joule, a colonial engineer who has been awakened from cryo-sleep to find and fix whatever has stopped the terraforming process on Far Eden. Aided by your robot dog, you begin exploring the large desert world, sampling its myriad dungeons and fast-paced action, and collecting more mechanical companions along the way. Once ReCore starts ramping up, however, the experience starts to unravel. Aggressive auto-targeting makes aiming during combat a non-issue. Instead, Comcept injects excitement into battles by making enemies so powerful that a few consecutive hits will kill you; you need to use Joule's double-jump and boost abilities to constantly stay on the move (and preferably off the ground). I'd be fine with the fast-paced and frenetic action if Joule's stagger animation – which is triggered by most enemy attacks – didn't leave you completely immobilized. The shameless A.I. is more than happy to capitalize on your vulnerability by whomping you with follow-up attacks, often ending in a frustrating death while you helplessly struggle to regain control.

ReCore's fickle combat is compounded by positively dreadful load times. Multiple areas take over two minutes to reload, no matter how cheap the death. Platforming sequences are thankfully immune from this problem, but the need to constantly move between zones, dungeons, "fast-travel" points, and Joule's sand crawler (the only place you can apply upgrades) means you're waiting almost as much as you're playing. This kind of egregious interruption is practically unheard of in modern gaming, and unacceptable. Far Eden also quickly loses its luster. The open world is massive, but shockingly barren. Entire swaths of the map are devoid of anything but white sand and the occasional recycled rock. Outside of the dungeons, you don't have much to do other than collect crafting items and get into random battles. Some areas of the map are so bland and uneventful that they feel unfinished.

Even ReCore's adorable companions have their flaws. While each of the four collectible robot frames features a unique ability to aid you in traversal or exploration, you can only have two with you at any time, and must return to a fast-travel location to swap them out. That means all too often when you come across a gated area or secret in the world, you don't have the proper companion to explore it. Upgrading each animal also slows down, as better frames require rare crafting items that you can't get without copious grinding. Even increasing their stats is perplexingly flawed – you have to boost each stat by slowly filling up a meter with your collected orbs, one level at a time, hundreds of times for each companion. ReCore's biggest annoyance is its constant attempt to pad the length of its campaign by slowing down your progress. Each main story mission sports both a level requirement and a prismatic core requirement. You gain these glowing orbs by completing "optional" side dungeons, but before you can enter them, you first must find a handful of collectible cellbots hidden in the world. My progress to the final tower, a five-floor gauntlet of platforming and combat challenges, was stalled for hours as I scoured the world for these dumb floating batteries, all so that I could snag a few more orbs.

Even worse, each floor of the final tower has its own increasing level requirement, yet doesn't offer enough XP to meet the next one. The result? After each area, I was forced to head back out into the world to grind in repetitive arena battles. This is a real shame, because otherwise the tower's devious challenges would have presented a satisfying culmination of your skills and a worthy prelude to the final showdown. Instead, they feel short and disjointed, and the final boss battle ends abruptly.

ReCore is a poster child for wasted potential. At its heart is a good (though not great) game, marred by long load times, technical problems (including frame rates dips and the occasional crash), and bad pacing. The infuriating and frivolous road blocks may have doubled the length of the 20-hour game, but they also halved my fun.

5.5
About Game Informer's review system
Concept
Split the player's time between demanding platforming sequences and repetitive battles in a large (but mostly barren) open world
Graphics
These low-resolution textures would've left gamers unimpressed last generation, and aside from your robot companions, the character models and animation don't stand out either
Sound
The voice acting and music rise above the generic sci-fi sound effects and explosions
Playability
Sometimes you feel like you're on unstable footing when landing, but otherwise the platforming feels good. Combat controls well, but gets repetitive
Entertainment
Horrendous load times, arbitrary progression restrictions, and downright confusing design drain ReCore of its potential
Replay
Moderate 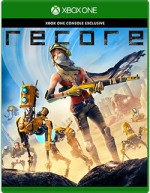