Chicago Cubs fans had to wait over 100 years for their loveable losers to win another World Series. I fear R.B.I. Baseball hopefuls will be waiting just as long for another respectable version of their game. Since the series’ revival in 2014, R.B.I. Baseball has struggled, and few attempts have been made to improve upon it.

The joke of “they just updated the rosters” is no joke in R.B.I. Baseball 17. While it was nice to see a roster update available already (released on March 31), little else is new outside of the menu graphics. In fact, it offers less content. The online multiplayer that debuted in last year’s game is nowhere to be found.

R.B.I. Baseball 17 delivers a degree of fun in the batting and pitching mechanics – which appear to be identical to last season’s game – but still struggles severely in handling the fundamentals of the sport. In one pitching instance, two runners on base held their ground on a routine fly ball to left field. That’s what they should have done. With one out in the inning, they decided to try to advance on a second pop fly hit to almost the same position in left. My fielder didn’t have to move to catch the ball. I then threw it to second for an easy double play. The A.I. malfunctioned in this instance.

I also witnessed a few A.I.-controlled players dive at balls a good six-feet away from them (see the video below). They didn’t field the balls, mind you, their bodies just collapsed comically to the ground. The game also has no interest in adhering to the laws of physics, as players who have their backs to a base can flick their wrist to send a ball sailing with pinpoint accuracy at over 90 miles-per-hour to record the out. These animations look terrible, and again, bring an unintentional element of comedy to the mix.

The crowds are once again significantly smaller than the players on the field, making it look like the entire Smurf village decided to take in a game. Players are also reluctant to turn their bodies, and instead rotate their heads like demonic beings. It looks terrifying. Most of the animations are rough, and the lack of transitional animations makes it look like a glitchy mess with players automatically appearing in different stances or positions.

Don’t expect to find anything new in the game modes, either. Players can still play or simulate an entire season complete with stats tracking, but you can’t trade players. The only roster management is position and bench swaps. Should you complete a season and want to continue on for another year, you'll end up playing through the same schedule. The only other avenues of play are exhibition and post season (which auto-generates the teams you square off against).

R.B.I. Baseball 17 is the prime example of a series being milked to death. What started off as a great idea of bringing arcade baseball back into the limelight has turned into a bona fide disaster, the likes of which we rarely see. I feel sorry for anyone who picks up this game assuming it would be better (or even different) than last year’s installment. 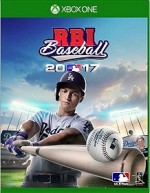 The rosters were updated, but little else is different than last year in this miserable baseball experience.

Purchase More Info
2
i
Game Informer's Review System
Concept The rosters were updated, but little else is different than last year in this miserable baseball experience
Graphics Most players are generic molds that don’t match up with their real-life counterparts. Animations are also troubled, frequently looking like they are missing frames or glitching out
Sound No commentary whatsoever, just “safe” and “out,” the crowd cheering, and an organ
Playability The batting and pitching match-up is still fun, pushing the player to move around in the box to put good wood on the ball, but fielding is hard to read, and base-running can be a nightmare given the computer often makes seemingly impossible plays
Entertainment A game can be completed in just 20 minutes. That’s all you have to suffer through, which is a plus
Replay Low