If you've played either of the two previous Rabbids titles, you have a general idea of what you're in for here: some laughs, a decent party experience, and a few clever minigames. The biggest changes are the incorporation of the Wii balance board and some limited online functionality (leaderboards and a lame dress-up contest similar to the Check Mii Out channel)

Using the board, you'll steer a wildebeest with your butt, surf through space on an ironing board, and stomp on it like the pedals of a tractor. This control method works fine, but eventually you'll get sick of the required calibration before every minigame and find that it's much easier to get a better score using the standard remote controls.

The solo campaign consists of a herd of Rabbids pestering Rayman with a week's worth of TV programming. Monday starts out with a deluge of minigame options, but as the days wear on you end up burning through the enjoyable modes and are eventually stuck playing junk and repeating songs just to finish up. Star Worse, for example, has you drawing shapes to blast asteroids, which, in concept, sounds cool. But it simply doesn't recognize 60 percent of what you're scrawling with the remote.

Throwing this in at a party, however, is a different story. The dancing game has that perfect mix of embarrassment and fun that makes it just as entertaining to watch as it is to play. Seeing four of your friends perform a disco point and butt slap combo is hilarious. Even some of the games that don't work as well get more of a pass in multiplayer since everyone's shared control issues throw a tinge of random luck into otherwise skill-based proceedings. 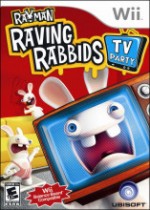 If you've played either of the two previous Rabbids titles, you have a general idea of what you're in for here: some laughs, a decent party experience, and a few clever minigames.

Purchase More Info
7
i
Game Informer's Review System
Concept Win the race to incorporate the Wii balance board into a minigame collection
Graphics The trademark cartoon look is enhanced with hilarious 2D animated fake ads
Sound You'll have Britney Spears' ''Toxic'' in your head for an hour afterward
Playability Unless you really want to dust off the Wii board, stick with the standard controls and make your life easier
Entertainment Decent multiplayer, dull single player
Replay Moderate