Rayman Origins made me take notice of a franchise I had never given much thought to. After playing through its sequel, I have an even greater appreciation for the artistry that Ubisoft has brought to ­2D ­platforming.

In an era in which game heroes carry virtual steamer trunks loaded with gear and power-ups, Rayman offers an elegant alternative. What you see is what you get. Aside from a rare boxing-glove upgrade, the characters’ moves are the same from beginning to end. Their arsenal of jumps, glides, and melee attacks didn’t leave me wanting more gimmickry, but instead made me feel all the more attuned to their precision and subtlety. Like Super Meat Boy, you learn exactly what characters are capable of, and how they can most efficiently maneuver around their worlds – a must, since the later levels are hard as nails.

Instead of simply treading water, Rayman Legends tackles new environmental themes and unexpected gameplay twists – including a stealth-based section and a level that plays a lot like a Metroid-style world. You won’t see yet another ice level or desert zone; instead, you explore spy-themed underwater lairs, bizarre nightmares, and other imaginative venues. The game’s new lighting engine adds another layer of visual flair to what was already a beautiful series. Ubisoft has even included remastered versions of levels from Origins that feature graphical updates and ­design ­tweaks.

Several auto-scrolling sections incorporate the game’s stellar soundtrack, including a mariachi-inspired version of Survivor’s “Eye of the Tiger.” Players’ jumps and attacks are timed to fit the music, and it plays like equal parts platformer and rhythm game. I only wish there were more of these – they’re incredibly fun to play.

As much as I love Legends, it’s certainly not a perfect game. Legends sticks with its predecessor in one unfortunate way, which is an overreliance on collecting items. You either squeak through levels perfectly the first time or have to revisit them later if you want to see everything the game has to offer. I’m all for gating off high-end rewards for that kind of dedication, but it was annoying to have to replay levels to free 9 or 10 of my hidden friends so that I could unlock the next set.

Fortunately, diversionary activities in the game make it feel like less of a grind. As you progress, you unlock tweaked versions of completed levels, which offer high-pressure, time-based challenges. There’s also a silly soccer minigame, as well as a variety of ranked online challenges that will be ­updated ­weekly.

All told, Rayman Legends provides top-notch gameplay with an expansive package of additional content. I’m glad to see the possibility of Rayman and his friends popping up at more regular intervals. If Ubisoft can maintain the series’ current level of quality, by all means, keep ‘em coming. I know I’ll eagerly play each one.

The Edge
Rayman Legends was originally conceived as a Wii U game, and it shows in many ways. Murfy can be controlled on the GamePad’s touchscreen, which lets players help friends by tickling enemies, making ­collectibles more valuable, and manipulating obstacles. That basic functionality remains on the Xbox 360 version, though Murfy is controlled by AI and players trigger his abilities with the press of a button. It’s functional, but not as satisfying. When playing solo, however, some sections on Wii U require players to control Murfy while the AI bumbles its way through levels. It’s easy to miss out on collectibles or lose lives through no real fault of your own. Playing solo isn’t the best way to experience the game, but without online multiplayer, it might be hard for some folks to round up a group for couch co-op. Wii U players get exclusive Mario and Luigi character skins.

9
About Game Informer's review system
Concept
Take Rayman and his crew out for another well-crafted platforming adventure
Graphics
Pause the game, and Legends’ exquisitely detailed world could be mistaken for concept art
Sound
The soundtrack is absolutely great, and it’s even incorporated into gameplay in a few clever levels
Playability
Rayman and his crew stick to the run-and-jump basics, but they do so exceptionally well
Entertainment
Ubisoft has inched the needle past the excellent Rayman Origins, delivering a great package with action, time-based challenges, chaotic multiplayer, and more
Replay
High 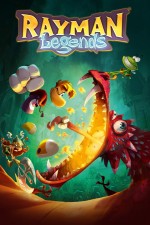