An Engaging And Flawed Side-Mission For QForce
by Matt Helgeson on Dec 05, 2012 at 06:10 AM
Publisher: Sony Computer Entertainment
Developer: Insomniac Games
Release: November 27, 2012
Rating: Everyone 10+
Reviewed on: PlayStation 3
Also on: PlayStation Vita First off, fans of the Ratchet & Clank series should know that this $20 retail and downloadable title isn’t a smaller-scale version of the series’ traditional weapon-oriented action/platforming. Full Frontal Assault combines the combat-focused approach of the PS2’s Deadlocked with elements of the trendy tower-defense genre. As an experiment in creating something new with the base gameplay of Ratchet & Clank, it’s an interesting title hampered by some fundamental design flaws, especially in the single-player campaign.

I was pretty taken with Full Frontal Assault at first. After some brief exposition, the QForce begins its quest to rid the universe of a new super villain (the insubstantial story swipes a major plot point from The Incredibles). Once you’ve touched ground, it’s clear this is a different type of Ratchet & Clank game. You have a base, and it has generators that you defend from harm. In your base – and the choke-point entry corridors – you can use bolts to buy turrets, mines, and other defenses to help protect your (rather fragile) generators. You also go out into the levels to collect bolts and unlock weapon pods to gain new implements of destruction, as well as activate key nodes that will ultimately help power up your planetary defenses and end the round. Speaking of weapons, they do level up but you must unlock them again each time you begin a new level, which is an annoying and odd part of the design.

The formula is a unique way to combine third-person action, light platforming, exploration, and tower defense. However, these disparate gameplay elements are frequently at odds. Your turrets, mines, and barriers are so easily destroyed by enemy forces that you can’t depend on them to hold down the fort, no matter how many bolts you spend on defenses. This means that you have to stop collecting bolts or finding power nodes to truck all the way back to your base every time a new wave of enemies attacks. It’s frustrating – especially because both parts of the games work well in isolation. The tower defense aspect – which is what Full Frontal Assault presents as its primary addition the Ratchet & Clank canon – ends up feeling like a chore.

As flawed as the single-player campaign is, the co-op and multiplayer aspects of the game are much better. Cooperative play with a friend (via both offline split-screen co-op and online) minimizes many of the issues that hamper the single-player experience. Being able to split up allows one player to hold down the fort and plan out the tower defense layout while the other explores the environment for nodes and bolts. Also, if you’ve got time between waves of enemies, both of you can go out and gather bolts, which speeds up the sometimes-tedious farming requirements. Even with a friend, you can be overmatched – especially in the final onslaught that occurs while you wait for your planetary defense system to power up.

Competitive multiplayer is another bright spot. You can compete in one-on-one or two-on-two matches. Each match consists of three phases – recon (where you collect bolts and unlock nodes that grant you weapons on the battlefield), squad (where you use your bolts to purchase units that will be sent out to attack your opponent’s base), and assault (where you can either lead an attack or defend your base and pray your units are successful). Exploring the environments to unlock nodes definitely has depth – and is all-important to victory, since nodes grant both weapons and recurring bolts throughout the match. However, the assault portion sometimes feels perfunctory, as victory is predicated by who was most successful in collecting the most bolts and buying the most units in the preliminary stages. I also think the paltry selection of maps hampers the long-term viability as an online game. Let’s hope Insomniac supports the game with post-launch map packs.

In the final assessment, Full Frontal Assault feels like an experiment that produced mixed results. If I squint, I can just make out the vision of the perfect melding of tower defense and third-person action that the game was meant to be. However, the true image of FFA is a game that feels as though it’s attempting to complete two different objectives, and failing to fully carry out either one. I admire Insomniac for continuing to take chances with the Ratchet & Clank series, but I’d rather the studio devote its resources to the new action/platformer that fans want. My heart hopes that these experiments are just marking time as the company silently works on a PlayStation 4 title. My head fears that the days of the big-budget platformer that doesn’t have the word “Mario” in the title are over.

To see the game in action, watch this episode of Test Chamber: 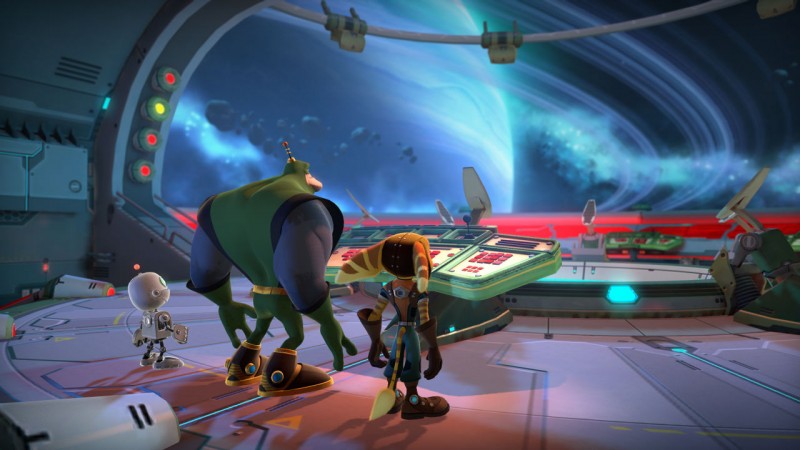 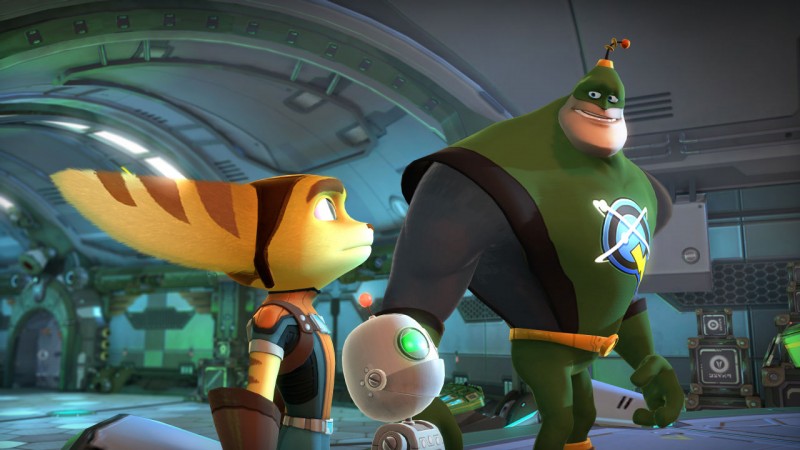 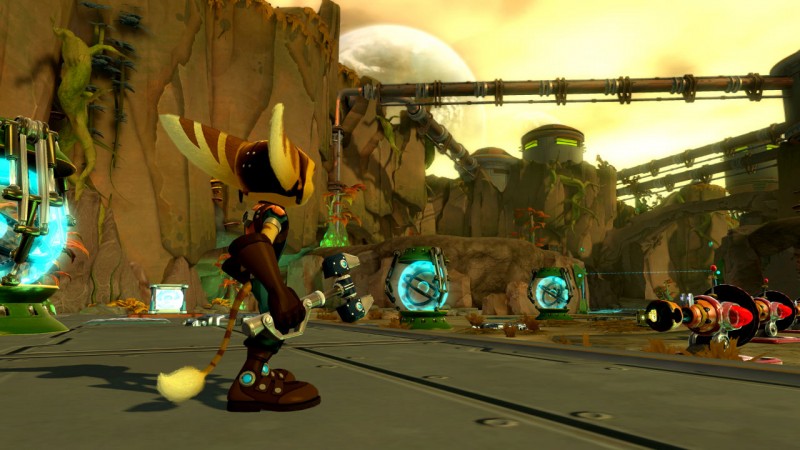 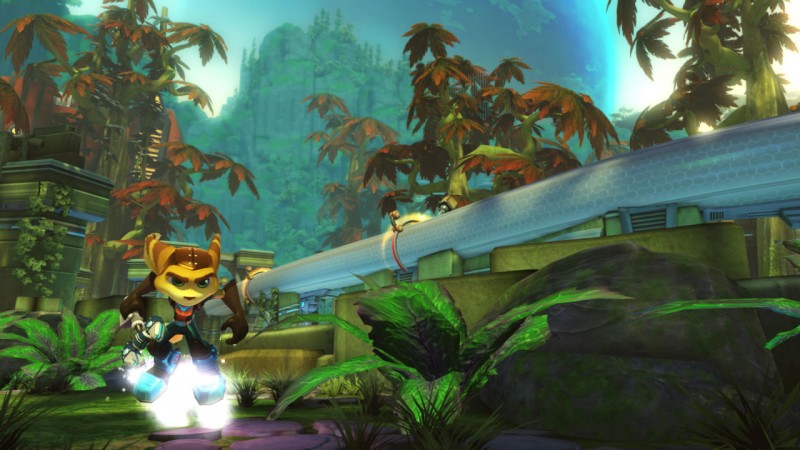 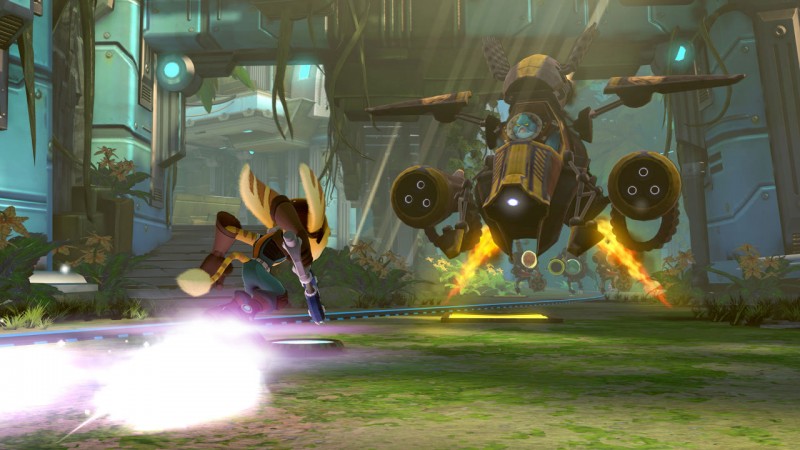 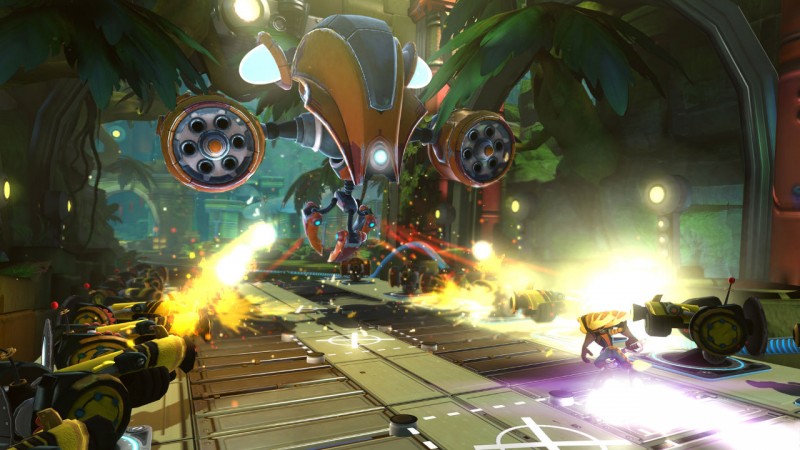 Full Frontal Assault is an interesting title hampered by some fundamental design flaws.

Purchase More Info
7.5
i
Game Informer's Review System
Concept Combine the action-oriented gameplay of Deadlocked with tower defense elements
Graphics The graphics are as bright and crisp as ever, but the framerate takes a noticeable hit in co-op
Sound The voiceovers (especially Quark’s) are humorous. The music is serviceable but unmemorable
Playability Tower defense elements are easy to grasp, and the basic controls are familiar for fans
Entertainment It’s an interested direction for this series, but this mix of gameplay styles feels like less than the sum of its parts
Replay Moderately High