This Is One For All The Fans Of Co-op Platforming
by Tim Turi on Oct 18, 2011 at 06:43 AM
Publisher: Sony Computer Entertainment
Developer: Insomniac Games
Release: September 1, 2011
Rating: Rating Pending
Reviewed on: PlayStation 3 Co-op is king in this generation of video games. We’ve spent many gleeful hours alongside friends aerating zombies, enemy soldiers, and alien invaders in myriad first-person shooters. While face-shooting is entertaining, sometimes we want a break from all the gritty violence. Ratchet & Clank: All 4 One lets us continue shooting stuff with our friends while delivering gorgeous cartoony visuals, inventive weaponry, manic gameplay switch-ups, and more witty dialogue than you can shake an OmniWrench at.

The story picks up with the bumbling President Quark preparing an acceptance speech for his Intergalactic Tool of Justice Award. Things go sour when recurring bad guy Dr. Nefarious attempts to take out Ratchet and the crew. Things go from bad to worse when a malevolent force called The Collector interrupts Nefarious’ attack by unleashing a monstrous beast on the city. The four dubious partners must put aside their differences to fight the rampaging monster, discover why The Collector is systematically harvesting creatures around the galaxy, and put an end to it. All 4 One’s story sports all the lighthearted and fast-paced action fans of The Incredibles and other CG masterpieces have come to love. Don’t let the new co-op features cause any doubts: This is another full-fledged Ratchet & Clank experience.

The characters and their interactions are another part of what makes this entry so charming. At one point the gang and a gigantic robot companion infiltrate a secured compound. When the robot uses his big metal hand to cover the jumbo-sized keypad while entering the passcode, he glares at the quartet as he punches in the last digit. I’ll also never forget the one-liners of robo-mercenary Mr. Zircon, who shouts in monotone, “Mr. Zircon does not require bolts, his only currency is pain.” The dialogue and absurd situations had me snickering consistently throughout.

Mr. Zircon is just one of many inventive tools of destruction at your disposal in All 4 One. Cycling through crazy weaponry has always been a highlight of the series, and the hijinks only become more rewarding with friends. For instance, one player can stun an enemy with an electric whip while the others scorch it with flamethrowers. Everyone’s fire rate increases as players bombard foes with the same weaponry, which culminates in a satisfying slow-mo explosion. Experimenting with Insomniac’s wacky weapons and discovering which combinations work best together is an enthralling game in and of itself. Though I’m fond of the trusty Combustor rifle, I rarely left the barrel of any gun cool for too long.

All 4 One’s variety is represented by more than just a diverse weapon set. You can barely adventure fifteen minutes without encountering a new enemy type or gameplay mechanic. I loved waterskiing ahead of a giant killer fish’s snapping maw – a battle that concludes with an electric coup de grace atop a lighthouse. I also enjoyed working as a team to guide a glowing power crystal through a dark forest to keep carnivorous plants at bay. Cooperating with friends to steer a raft down a river or pilot a hover car through a bustling city is a hilarious exercise in democratic gameplay. If you’re the lone wolf type, a brilliant AI partner makes for a fulfilling single-player experience. I marveled at how effectively my computer-controlled helper dispatched enemies and aided in puzzle-solving. If you need to pass Clank a key to open a door, he’ll be on the opposite end of a chasm waiting to catch it without missing a beat.

Despite my appreciation of the game, a few odd choices in the drop-in/drop-out co-op hold back the game from achieving nirvana. Progress can only be saved to the console-owner’s profile, so all those hard-earned bolts and weapons your friends earned playing locally will be lost when they drop out. If buddies decide to join your game in later acts, they begin with a measly peashooter. Though bolts are plentiful late in the game, new local players have to endure countless deaths before amassing an adequate arsenal. This presents a frustrating conundrum – the game shines brightest when played on a couch with friends, but unless you plan on one 12-hour marathon session, your buddies will have to start from scratch next time. The only way for everyone to save their gear is to play on independent profiles online, which removes the joy of playing side by side. These qualms aren’t dealbreakers, but gamers without a healthy reserve of patience should consider them.*

All 4 One’s insane amount of variety will satisfy both fans of the series and gamers interested in a change of pace. The game’s sense of humor alone is sufficient grounds for recommendation. Insomniac’s latest cooperative treat is a breath of fresh air. 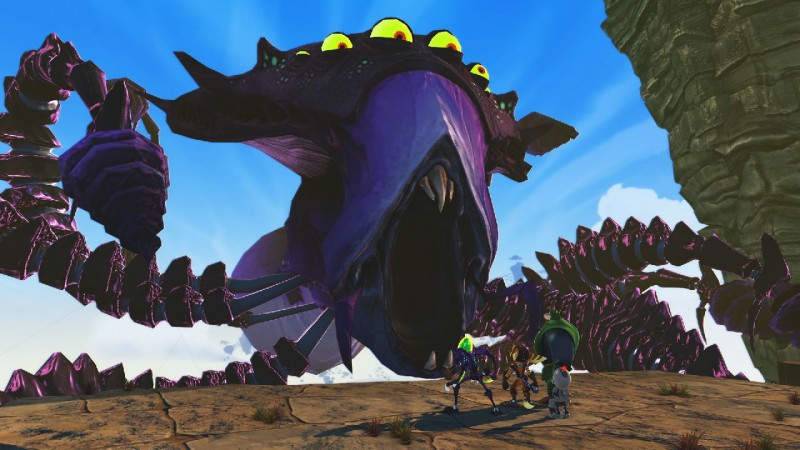 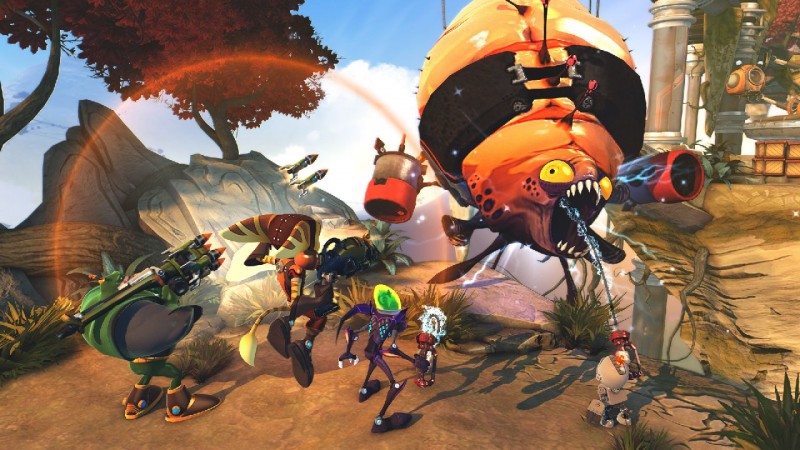 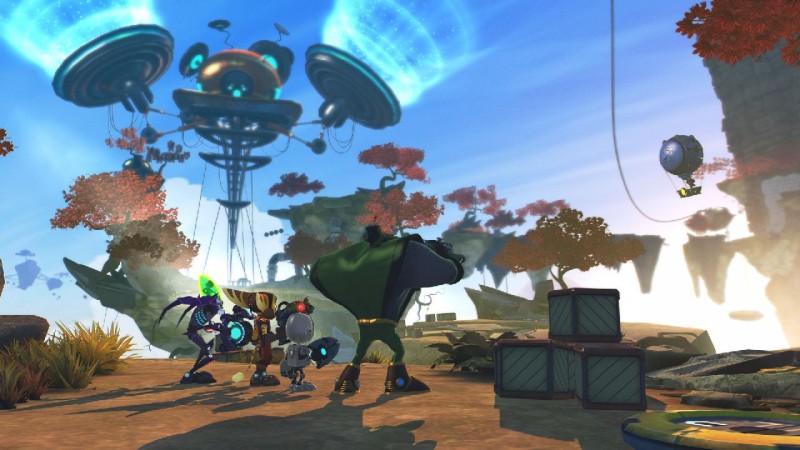 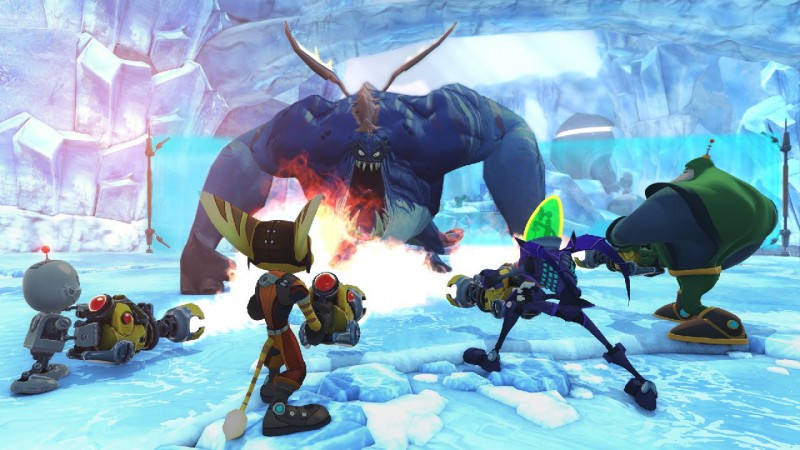 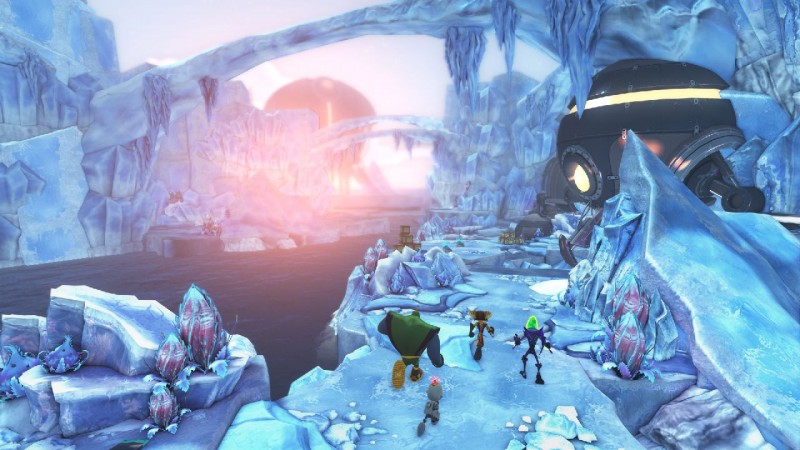 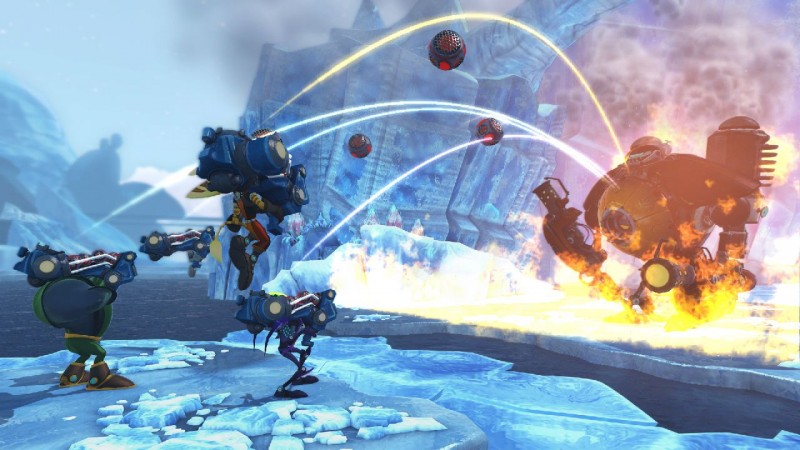 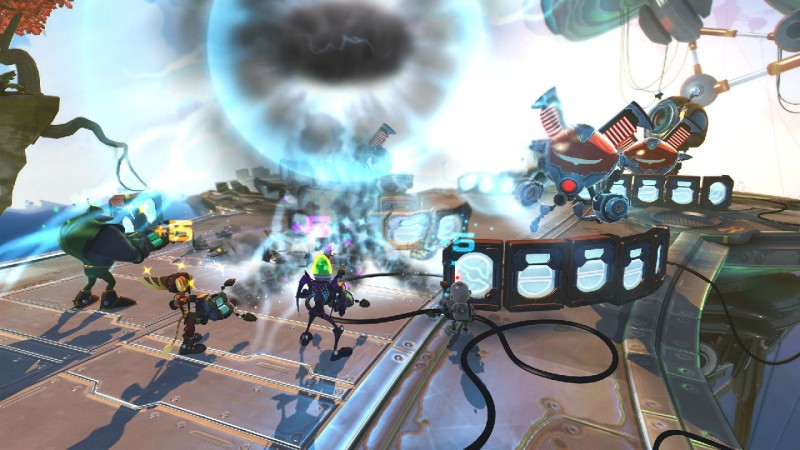 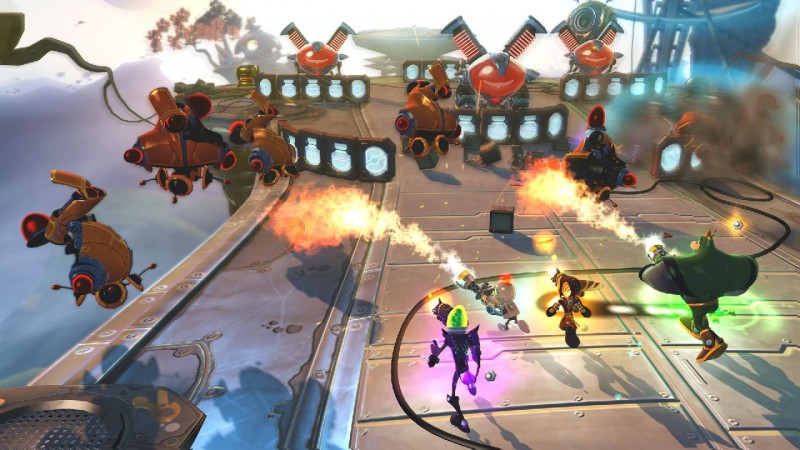 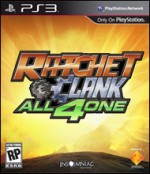 Insomniac's latest lets us continue shooting stuff with our
friends while delivering gorgeous cartoony visuals, inventive weaponry,
manic gameplay switch-ups, and more witty dialogue than you can shake an
OmniWrench at.