Ratchet and Clank have been going through a bit of an identity crisis. After saving the universe time and time again, this oddly paired duo sought outside help in their most recent endeavors. They expanded their team to four members in Ratchet & Clank: All 4 One, and called upon automated defenses to aid them in Ratchet & Clank: Full Frontal Assault. Such deviations from their traditional formula didn’t convince me that these well-known characters should be doing anything other than blowing away aliens with ridiculously overpowered weapons. Insomniac’s attempt to reinvent this franchise smacked of the problems Sonic the Hedgehog has exhibited for years.

It didn’t take long for Insomniac to recognize what needed to be done. Ratchet & Clank: Into the Nexus is a return to classic form. The Lombax and his metal companion are aging well, losing neither their ability to transform enemy legions into smoldering messes of nuts and bolts nor the allure that makes this action so much fun.

The controls and overall design fit like the same glove we’ve worn since 2002, but the new weapons and gadgets give this well-worn formula new life. Ratchet can whip up a lethal cocktail on the battlefield, blending the sheer might of Warmonger rockets with the diversionary Nightmare Box, which creates a ghoulish image that sends enemies reeling into an overly dramatic state of shock. Another weapon tears open the dimensional fabric to unleash flying serpents upon your foes. The weapon selection is diverse – allowing for numerous strategies to be deployed – and satisfying to wield. And yes, there’s a new RYNO to construct and use.

Clank detaches from his compatriot’s back to save the cosmos in side-scrolling platforming sections heavily inspired by Terry Cavanagh’s indie game VVVVVV. In these sequences, Clank alters gravity to cling to the ceiling, floor, and walls to solve puzzle-like sequences and dodge deadly pits and spikes. These sections are a welcome challenge and a nice wrinkle that changes up the action at the right times.

Into the Nexus is a short game, consisting of just four planets to explore. Insomniac infuses new ideas into the traversal methods, touching slightly on Portal 2’s style of gameplay with the Grav Tether gadget that connects two points with a gravity beam. Most of these worlds are straightforward, but completionists will like the design of Planet Thram, which disperses items to collect and side missions across a large, deadly swamp. Arena mode is a part of the mix, but it doesn't deliver much of a challenge. Most of these arena battles are over in a flash.

I invested roughly 10 hours into this enjoyable little game. About five hours went to a thorough sweep of the critical path campaign, and another five to Challenge mode (a harder version of the game that unlocks powered-up Omega weapons). The story is predictable, but filled some smirk-worthy jokes, and a couple of large events that will have longstanding effects on Ratchet and company. The ending is a nice tease that should put a smile on the face of fans of the series, as it points to another big adventure that Insomniac will likely bring to PlayStation 4.

Into the Nexus’ gameplay holds true to what we’ve known and enjoyed for over a decade. Should we be demanding bigger and better things? Maybe, but there’s something about this formula that just works. I walked away from it hungry for more. 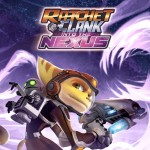 Into the Nexus’ gameplay holds true to what we’ve known and enjoyed for over a decade.

Purchase More Info
8
i
Game Informer's Review System
Concept Ratchet and Clank must battle an inter-dimensional threat in this true-to-form sequel that packs a big (albeit short) punch
Graphics The series shows its age in the texture work and character models. Regardless, the level of visual destruction is impressive, often covering the screen with explosions, particles, and flying nuts and bolts
Sound The soundtrack is playful and energetic. The blizz-o-matic’s melodies give this entry a little holiday cheer
Playability Some environmental exploration is tiring (like taking time to spin bolts to open doors), but the weapons and gadgets are excellent and offer plenty of variety
Entertainment Insomniac Games rediscovers its form, but the encore is short-lived, ending just when it seems the second act is about to begin
Replay Moderately High