Ratchet & Clank is a relic of yesteryear, a survivor from an age when anthropomorphic characters were all the rage in video games. Crash Bandicoot. Sonic the Hedgehog. Sly Cooper. Banjo. Conker. Daxter. Insomniac Games’ space-faring critter stood tall with these iconic characters, but as gamer tastes and technology matured, the bandicoot mysteriously vanished, and the hedgehog became one of the biggest punch lines in gaming. One by one, these characters faded out of the limelight. Ratchet somehow escaped the culling, and more impressively, has remained a constant fixture in games since his debut in 2002 – though his significance in the gaming landscape has diminished through the years. Here’s the scary part: After starring in over a dozen games to date, his popularity may soar to new heights when the Ratchet & Clank movie opens in theaters on April 29.

While it seems backwards and wrong that a new Ratchet & Clank video game would be adapted from the film, which in turn is based on his original game, that’s exactly what we are getting. Parts of this game are taken directly from Ratchet & Clank’s PS2 debut, placing it slightly in remake territory. Other elements, like plot points and characters, are mined directly from the film, turning it into somewhat of a movie game. A large portion of the content is also entirely new and true to the latest installments in the series, moving it slightly into the realm of a sequel. As oddly Frankensteined as this experience is, it can best be summed up as immensely entertaining, and a worthy successor to Ratchet’s latest endeavors.

Some challenges, story sequences, and locations are recycled from the original 2002 game, but they don’t come across as retro at any time. The wealth of new content injected into the classic content dramatically affects the challenges and gameplay flow. The visuals accompanying these elements are also quite different. I was struck more with a sense of déjà vu flaring up throughout the adventure than the feeling of returning to something old. Almost every planet name is recognizable, but the experience is about reimagining the past rather than reliving it. Even Planet Kerwan, which once again delivers the obstacle course and train ride, offers enough deviation in the challenge design to avoid treading the same terrain. The 2002 game was a bit of a slow starter that favored a gradual difficulty increase, but Insomniac wastes no time here throwing players into the fire. This adventure rips out of the gate, and doesn’t shy away from overwhelming Ratchet with hordes of enemies. Ratchet repels the onslaught with nimble movements (including the jet pack from Ratchet & Clank Future: Into the Nexus) and a beefed up arsenal. His wrench is as potent as ever, but it's quickly forgotten when his awesome firepower is unleashed. The new Pixelizer HD is as beautiful to watch as it is fun to use; it kicks like a space mule and transforms every enemy it hits into a sea of retro pixels. Other weapons are equally amusing, like the Raptor Launcher, which challenges the player to pause for a few seconds to establish multiple target locks. All of the weapons feature upgrade paths and can be leveled up five times to deliver more damage, but the leveling process is unfortunately quick. Weapons can be capped in no time flat, meaning you might want to shelve them in favor of upgrading other firearms to become more powerful. This isn't a game where you can lean on your favorite weapon to blast through levels.

On top of the redesigned content, this Ratchet & Clank experience is loaded to the brim with fun new collectibles, like Holocards and Raritanium. The hooks of exploring to uncover these goods sink in nice and deep, bringing big rewards if they are secured. Holocards provide percentage bumps to drops, whereas Raritanium is used to upgrade the weapons.

New ideas also emerge in the diversionary gameplay, but some humor and charm are lost in the process. The new flight sequences, in which Ratchet pilots a craft that moves as slow as a hot-air balloon, don’t get the blood pumping, and are more a test of wrestling with somewhat clunky controls than skill. The amusing giant Clank sequences of old are no longer around. We instead see Clank solving simplistic puzzle rooms with robot minions. These sequences are clever, but aren't nearly as fun as the core game. The hoverboard races of yesteryear also don’t add much excitement to the experience.

As challenging and fun as the core combat can be, the hardest part of the game (doubling as its biggest misstep) is a door-lock minigame utilizing the Trespasser gadget. This chore has the player lining up lasers with locks, spinning a series of wheels to alter the trajectory of the lasers. These puzzles usually only have one solution, and by the end of the game, take serious time and thought to crack. Insomniac obviously knew this minigame was tough and inserted a “solve it for me” cheat. The catch: If you cheat, you won’t be able to earn a PlayStation Trophy or the in-game rewards tied to the puzzle. Door lock minigames are rarely fun – especially when they require this much effort.

I won’t spoil the plot of this origin story, but I will say Captain Qwark is rightfully used excessively and has a somewhat surprising role to play in this tale. The humor is hit and miss, but the narrative flows along at a nice pace and hopefully sets the stage for a sequel, or a similarly reworked version of Ratchet & Clank: Going Commando, the second game in the series.

Ratchet & Clank has always been a showpiece of new-gen technology, and while this entry’s environments look a little retro, the detail in the characters and the explosion of bolts and gears are legitimate spectacles. The colors pop, the worlds feel more alien, and the heart of the adventure is right where it needs to be: with explosions and rockets lighting up the screen like a Fourth of July fireworks celebration. When Ratchet’s doing what he does best (blowing stuff up), this new experience sings its classic tune well. 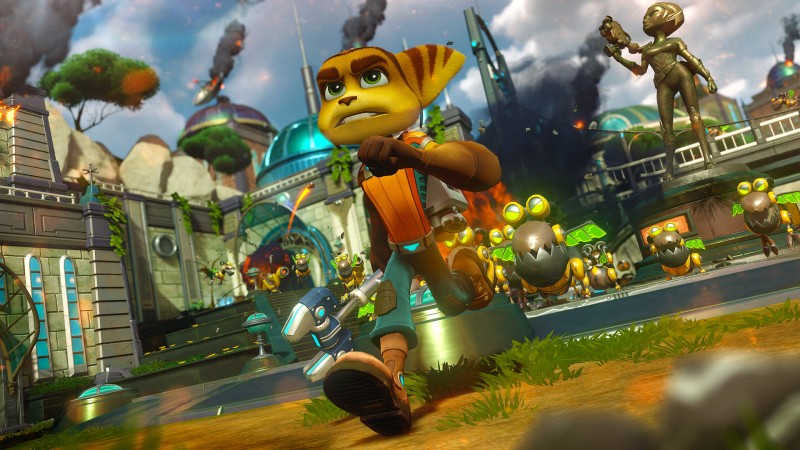 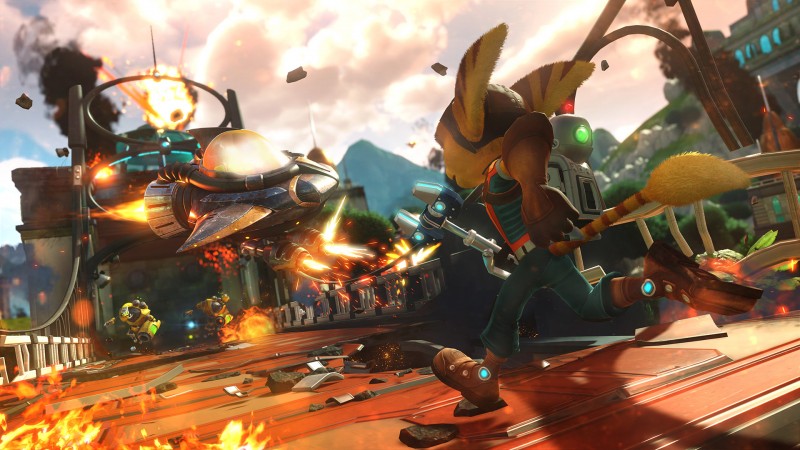 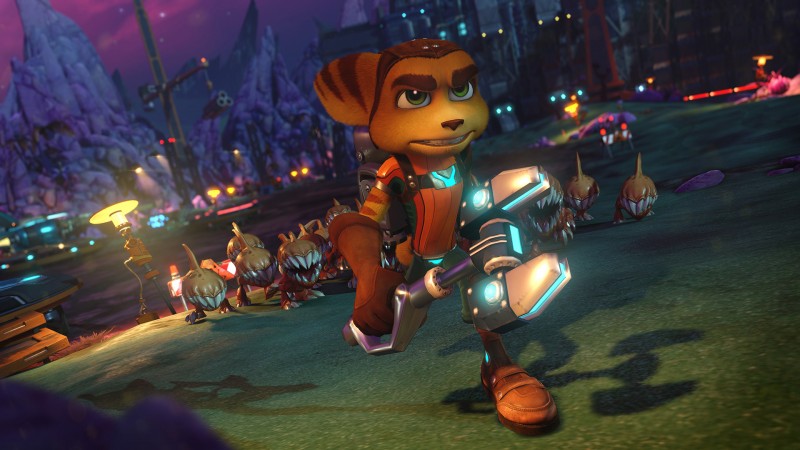 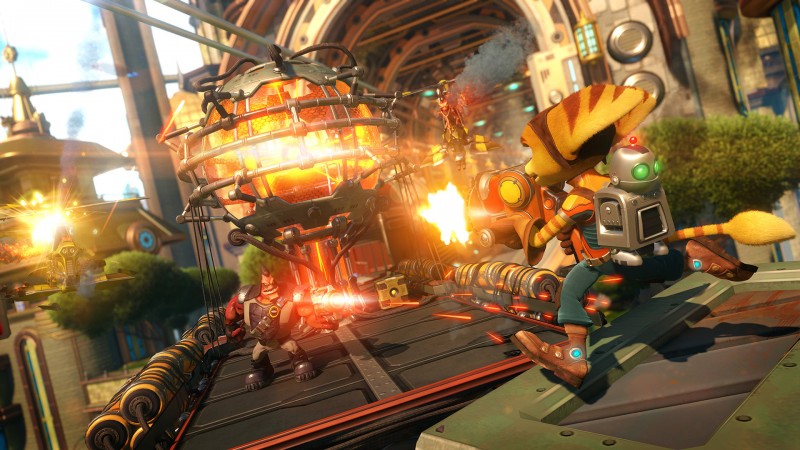 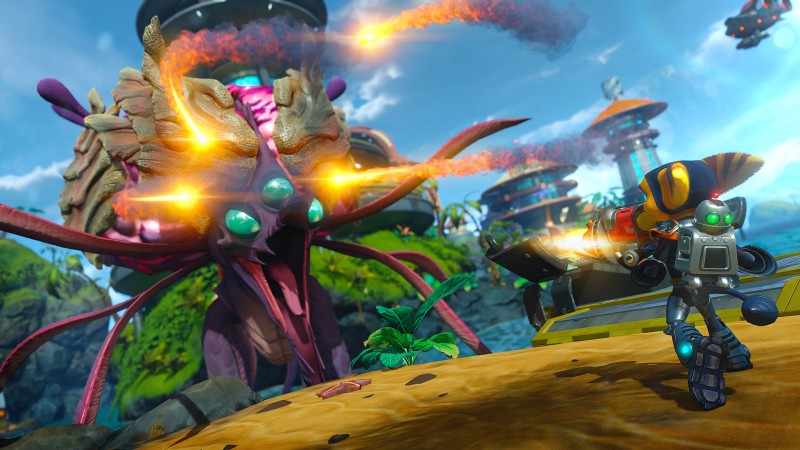 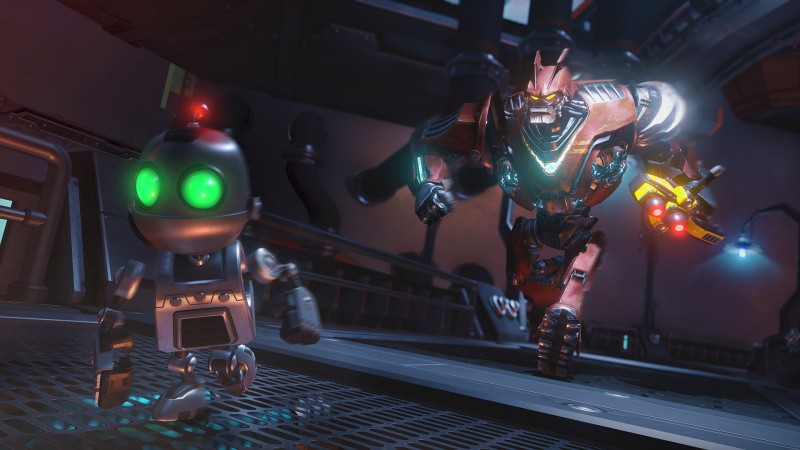 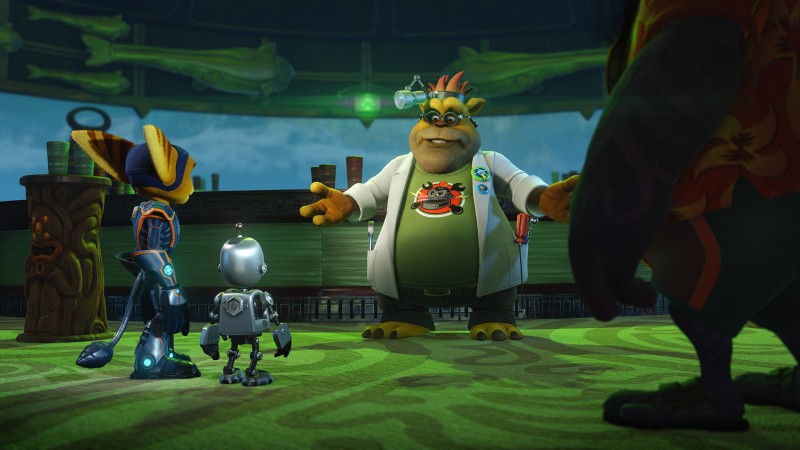 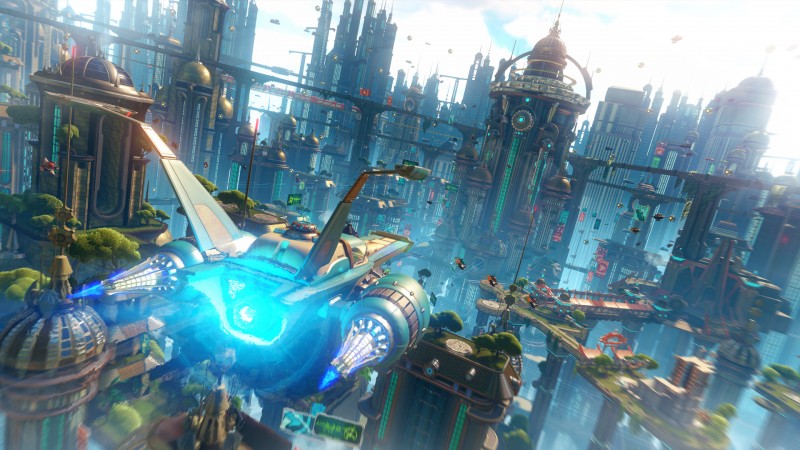 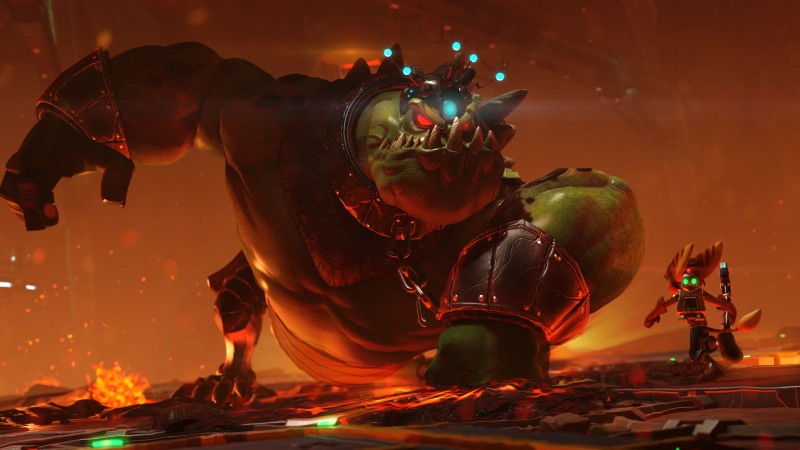 8.25
About Game Informer's review system
Concept
Is this a remake? A sequel? A movie adaptation? It’s all three of these things at once, with the most weight placed on providing new experiences for fans
Graphics
The cityscapes are modular and retro in design, but the chaos that erupts onscreen is stunning
Sound
The sound of hundreds of bolts being farmed never gets old. The soundtrack is also quite good, but the dialogue can be cringe inducing at times – not from the voice actors, but the dated jokes in the script
Playability
Ratchet is as agile as ever, and is equipped with his strafing abilities and upgraded jet pack. Side diversions fall flat and break up the fun flow of combat
Entertainment
I couldn’t put the game down, and I immediately jumped into the post-game Challenge Mode to play more of it
Replay
Moderately High