No One Wins In These Chaotic Races
by Jeff Marchiafava on Jan 06, 2011 at 08:20 AM
Publisher: Microsoft Game Studios
Developer: Halfbrick Studios
Release: December 28, 2010
Rating: Everyone
Reviewed on: Xbox 360 Raskulls may be a groan-inducing name for a video game, but it’s the least of this XBLA title’s problems. As the game’s light-hearted humor and goofy characters slowly grew on me, it was the surprisingly high difficulty level and unpredictable action that made me want to bang my own skull against a wall while playing it.

The main focus of Raskulls in on racing. Players run through labyrinthine 2D levels on foot, attacking rival characters and muddling through simple platforming segments while racing for the finish line. Your character moves painfully slow when you run out of your boost power, and you don’t have enough height to your jumps, making all but the smallest gaps impossible to cross.

Instead of jumping, your mobility depends on the ability to disintegrate path-blocking bricks with a zap attack. This element gives the game a Mr. Driller-like quality, but the urgency of the races eliminates almost all strategy, leaving you to frantically zap whatever gets in your way. Power-ups allow you to blast quickly through blocks or electrocute your opponents, but these powers only add to the unpredictability.

The single-player campaign also has a number of puzzle levels, which trade dwindling timers for challenges like breaking a limited number of blocks to complete the stage, or defusing bombs embedded in the landscape. These challenges are still unnecessarily hard, but having time to contemplate your next move makes them less frustrating and more enjoyable.

If you want to play Raskulls, multiplayer is your best option. The chaotic nature of the races works in their favor, and those previously annoying upsets at the finish line offer plenty of bragging rights among competitive friends. Unfortunately, basic races are the only game type available in multiplayer, although you have plenty of levels to compete in.

I enjoyed Raskulls’ goofy characters and puzzle missions, and had fun playing the multiplayer against my co-workers. But the single-player races – which make up the majority of the campaign – felt more like a chore than the main course. If you have a lot of patience, you might find Raskulls’ single-player challenges rewarding. Otherwise, you’re better off dabbling in the campaign and focusing on the multiplayer. 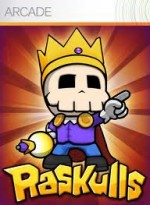 As the game’s light-hearted humor and goofy characters slowly grew on
me, it was the surprisingly high difficulty level and unpredictable
action that made me want to bang my own skull against a wall while
playing it.

Purchase More Info
6.5
i
Game Informer's Review System
Concept A unique twist on racing, with lots of variety
Graphics The cartoony design is simplistic, but has its charm
Sound The handful of sound effects you’ll hear are pretty forgettable
Playability The controls are fine, but the chaotic nature of the races is irritating
Entertainment Raskulls is fun with friends, but the single-player mode packs more frustration than fun
Replay Moderate