The animated film Rango almost seems like it was designed with a companion game in mind. You’ve got a hardscrabbled Western setting, strange characters, and a cowboy story that throws just about every spaghetti Western trope at the wall to see what sticks. Not only is there a game, but it’s a surprisingly well-done effort. Whether you’re a fan of the movie or are just in the mood for a nice little platform game, Rango is worth a look.

Rango is set a few years after the movie, once the titular chameleon has comfortably settled into his role as sheriff of the town of Dirt. One of your buddies comes into town with a mysterious glowing rock fragment before he’s vaporized. Rango calms down the townfolk, explaining that he knows what’s going on. The rest of the game is structured around his long-winded and often unreliable telling of the tale.

Rango is on a mission to acquire the mysterious stones, while fending off attacks from Bad Bill and his gang of miscreants. Rango is a capable melee fighter, but his real strength comes from his popcorn-launching pistol. Moles, prairie dogs, and other assorted varmints are easy pickings for Rango, thanks to the game’s excellent targeting.

You won’t see much in the way of innovation in Rango’s gameplay, but it has successfully cribbed elements from some of the best in the business. One minute Rango is grinding down rails and hopping across gaps, the next he’s chasing after the bad guys on his trusty roadrunner, dodging collapsing stone formations. Enemies and crates explode in showers of sheriff’s stars, which can be spent on a variety of character and weapon upgrades.

One of my favorite things about Rango is how the story completely goes off the rails near the end thanks to an episode of heatstroke. It’s a bizarre sequence that includes pixelated versions of the game’s enemies, flying goldfish, and other oddities. As with the rest of the game, it’s funny, charming, and easy on the eyes.

Ultimately, Rango’s another example of how to do a licensed property justice. Rather than simply rehash the movie’s story, EA and Paramount are giving players a new adventure to experience. It’s a little on the short side – and even then it starts to get repetitive near the end – but it’s definitely one of the better tie-ins I’ve played over the years. 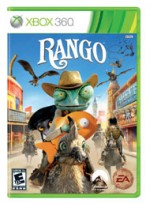 Whether you’re a fan of the movie or are just in the mood for a nice little platform game, Rango is worth a look.

Purchase More Info
7.5
i
Game Informer's Review System
Concept Tell another series of tall tales with the cast of the animated movie
Graphics It’s a great-looking game, with oddball characters and memorable settings
Sound Rango’s filled with fun riffs on Western soundtracks, from the signature song on down
Playability Any deaths you might experience are your own fault; Rango does what you want without any fuss
Entertainment Rango is a great pick for kids or for anyone else looking to blow an afternoon on a well-polished platformer
Replay Low