The name id Software rings of nostalgia. Franchises like Wolfenstein, Doom, and Quake laid the groundwork for the first-person shooter genre, and I can still see their designs influencing many of today’s new releases. Despite the studio’s pedigree, it hasn’t developed an FPS title since 2004’s Doom 3. The genre has changed significantly in the years that have followed. Franchises like Half-Life and Call of Duty are the genre’s trendsetters. Now, id Software makes its long-awaited FPS return with a new franchise called Rage. Can the father of the FPS reemerge as the powerhouse it once was, or will it be playing catch-up to the genre’s latest trends? The answer is a little of both.

At this year’s QuakeCon expo, John Carmack, id co-founder and Rage’s lead programmer, revealed he had been working on this new title for the better part of six years. The lengthy gestation period has produced one of the most technically sound shooters to date. Rage roars at a constant 60 frames per second, offers sophisticated gunplay, and lights up the screen with an incredible level of graphical detail. The game continually wowed me with its technology and small touches, such as every NPC having unique animations scripted to each word they utter, and an enemy being smart enough to recognize that the quickest path to the player’s location isn’t a winding path, but rather cutting the distance by jumping over fences.

The lengthy development cycle could also be responsible for the game’s most disappointing component: the story. After a gorgeous introductory cinematic which shows an enormous asteroid crashing to Earth in the year 2029, producing a post-apocalyptic wasteland, players are introduced to their avatar in this world, a silent protagonist who ends up being the whipping boy of every person with a problem that needs fixing. He’s the perfect accomplice to an uneventful narrative that slogs along with all the excitement of a dehydrated person slowly shuffling his feet in the wasteland’s sands. Just when it seems this story might produce a meaty plot thread, the game ends unexpectedly with no major confrontation or sense of victory leading up to it. The best comparison I can think of is if Star Wars ended with Obi-Wan lowering the Death Star’s tractor beam. Roll credits.

While most people will likely rave about Rage’s technology, this game’s most impressive component is its gunplay. This is largely due to the game’s fearless foes. Like Left 4 Dead’s bloodthirsty zombies, the mutated hostiles of the wastes sprint toward the player. They crawl out of the woodwork, scamper along walls, and create a sense of absolute terror. I can’t overstate how impressive this game’s animation system is. Shooting a mutant in the side might make it slam into a wall, but its legs never stop moving. It drags itself along, eyes glued to yours, and fights to regain balance to continue its rapid pace. Interestingly, the player is not equipped for close quarters melee. In fact, the rifle butt and punch attacks rank among the weakest I’ve seen in a current-gen FPS. The challenge posed to the player is to put them down quickly, or pray that every close range shotgun blast hits a large chuck of flesh. Most of the major battles unfolded with me panicking, firing off shots with a furious intensity, and escaping with the feeling that I had accomplished a miraculous feat.

There’s a nice selection of close- and long- range weapons, and while id’s patented BFG makes an appearance in the form of special ammunition, this arsenal’s most trusted killer is oddly a boomerang called the wingstick – one of the most satisfying weapons in any FPS. The wingstick is designed with the specific goal of lopping off heads. Watching a mutant in a full-on sprint lose his noggin and collapse to the ground just as the wingstick flies back into your hand is a supremely satisfying spectacle.

Rage isn’t a standard level-to-level shooter. At any point in the game, players have the opportunity to freely explore a moderately sized open world. Outside of illustrating how the asteroid affected the world and how mankind has adapted to it, this vast playing space’s primary function is to shuttle players from a hub city to a mission marker. The means of travel is a vehicle tricked out with weapons galore. Bandits in vehicles of their own will try to derail your quest, but even on the highest difficulty setting they pose little challenge. As much fun as it is to blow these adversaries away with rockets, the vehicular component, which includes races, is an entertaining distraction and nothing more.

A slew of other diversionary minigames, such as an awesome collectible card game, are included into the hub cities. However, the most satisfying side activity is looting, which makes the lack of content in the overworld more disappointing. Every item that flashes in the environment – be it gas cans or bandages – can be picked up and stored in a limitless inventory. At first, these items may seem completely random, but as the game progresses and new weapon and item blueprints are obtained, they can be combined for on-the-go crafting. Turrets, remote control cars, healing items, grenades, and other handy devices can be created from anywhere, even in the heat of battle.

Rage’s story and overworld design feel dated, but its heart-pounding gunplay is a nice change of pace in a market filled with “follow me” and pop-and-fire shooters. While light RPG elements are present, this is mainly a game for players who love challenging combat experiences.

Multiplayer
Rage’s gunplay seems like a perfect fit for classic id-style deathmatching, but the only multiplayer options offered are six-player vehicular combat and two-player co-op challenges. The co-op levels are sections stripped from the campaign and outfitted with new enemy formations. They’re a blast to play, but they can be completed in a few hours total. The vehicular warfare doesn’t offer a large number of maps, and as nicely crafted as the controls are, grows old quickly. While the completist in me wanted to reach rank 20, my interest was fully tapped around rank 10. 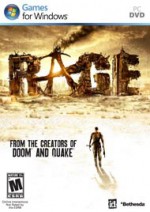 Can id Software reemerge as a powerhouse or
will it be playing catch-up to the genre’s latest trends?

Purchase More Info
9
i
Game Informer's Review System
Concept A wild romp through a post-apocalyptic wasteland that features gripping gunplay and satisfying looting
Graphics The id Tech 5 engine provides amazing visuals presented at a fluid 60 frames per second
Sound The soundtrack is appropriately moody and the impressive voice acting fits the colorful personalities
Playability Rage’s shooter component shines and offers an experience unlike any other FPS on the market. The racing sections are no more than optional diversions
Entertainment Id’s return is worth the wait and stands out in the crowded FPS market
Replay Moderately High