Radial-G is your classic launch title: a game with a few tricks up its sleeve that get too worn, exposing itself before long. The futuristic racer isn’t about the pure gameplay of driving, and the sheer experience of playing it is not so spectacular that it overtakes the senses. It is, however, well-suited for the Oculus Rift, even if that doesn’t excuse its shortcomings.

The racer takes place over generic space-age tracks suspended in the air. These aren’t flat paths; they are more like giant worms coiled and suspended in the atmosphere. This gives you an entire surface to revolve around in search of boost pads to momentarily surge you forward, free lanes away from the competition, and multiple paths to avoid debilitating energy gates that slow you down.

The tracks may launch your ship in the air or undulate up and down and bend to the side, but neither they nor their background environments are too demanding or inspiring. Thus, from a gameplay perspective, there isn’t much to the racing itself apart from simply steering to avoid anything that gets in your way. As a futuristic racer, certainly Radial-G is free to write its own rules when it comes to physics or handling – I never expected this to be a hardcore sim – but more sophisticated tracks and demanding or nuanced handling would add more intrigue.

The race types in the career mode don’t add much spice, either. The needless race mode removes the speed-dampening energy fields (why would you remove one of the few track features that adds even a modest wrinkle of complexity?). The eliminator is conventional and uninteresting, and death race is notable only in spite of itself; it doesn’t allow you to repair damage to your ship like in a normal race, but it is hampered by the fact that the other A.I. ships don’t seem to follow the same rules. They bump into you on the track but don’t appear to suffer damage like you do, which is a maddeningly unfair aspect of the mode.

Radial-G has its moments, such as when you hit a few successive boost pads and rocket up to the top of the slope, and as you reach the apex you have no idea what’s going to come next. That being said, while the speed ramps up a little as you progress through the career mode’s tiers, the game backs off of throwing too much at you in quick succession. The upside of this is that after a gravity beam drags you to the “ceiling” of a track or launches you over a gap, the game is careful to let you get your bearings before presenting what’s next. The downside is that as far as rollercoasters go, this one is middle-of-the-road, homing in on a few key tricks at the expense of a more in-depth and ultimately satisfying experience.

The one commendable thing that Radial-G (and the Rift, to a larger extent) adds to the racing genre is something grounded in real racing: As you enter a corner or come down a hill, you’re able to look at what’s coming further down the track thanks to the greatly expanded field of vision and head tracking. In racing terms, this allows you to better prepare your line through a corner and what’s ahead. Ultimately, however, this ability is largely wasted because the game makes so few demands of its players.

Radial-G has more going for it than a paltry tech demo. Its tracks – while not outstanding – show some thoughtful design by stringing together a few noticeable moments every lap. The game doesn’t elevate the Rift or VR to the height of its powers, but it also wouldn’t be the same by itself.

Chasing Those Speed Demons
Since I suffer from motion-sickness during some games, I wasn’t sure how much of Radial-G I would be able to handle. Thankfully, while the sense of speed is decent, I did not suffer greatly while playing as long as I took a little break between every two or three races. Radial-G features some peaks and valleys, but it doesn’t drop your stomach or disorient significantly.
Off
On
Off 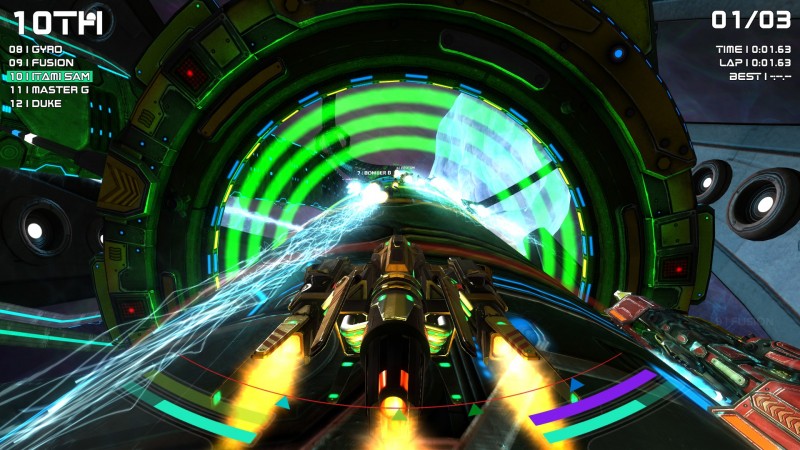 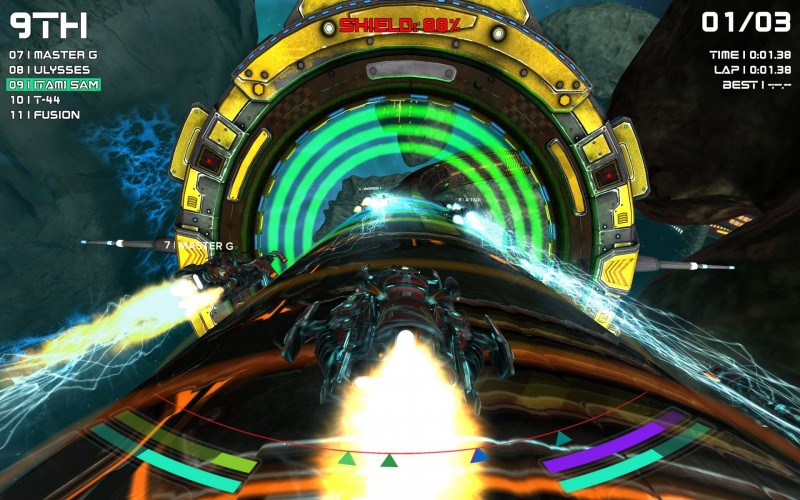 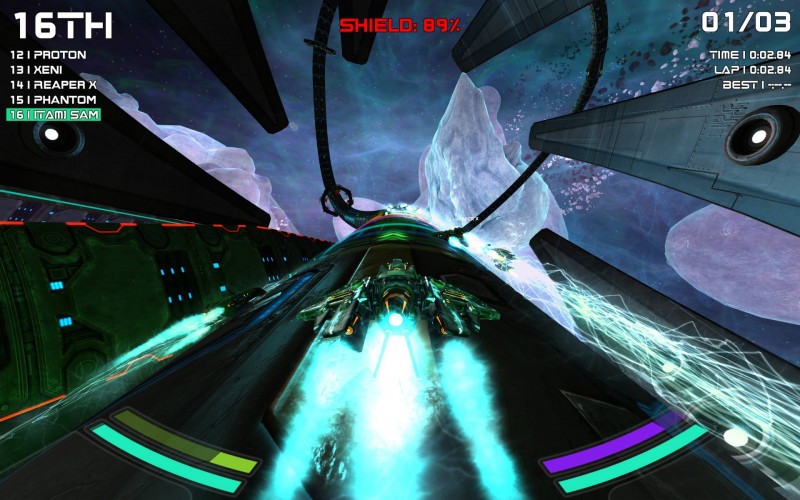 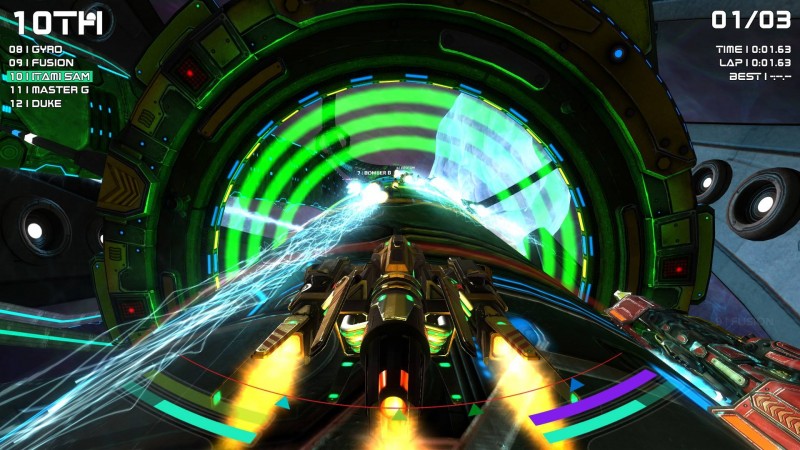 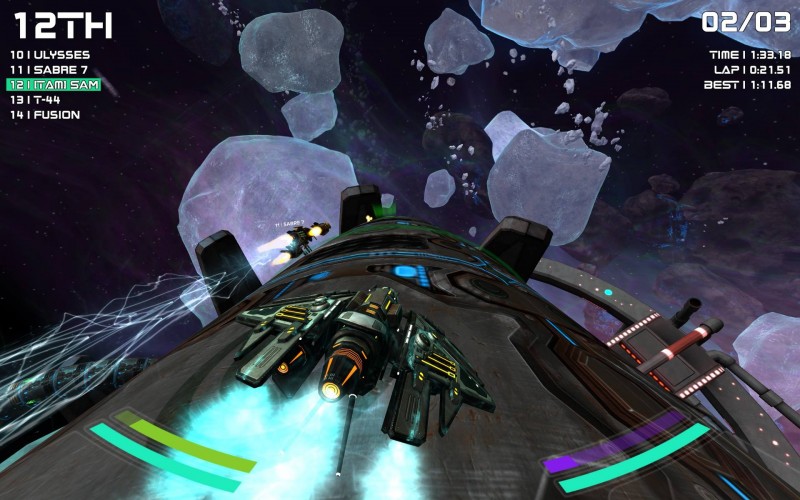 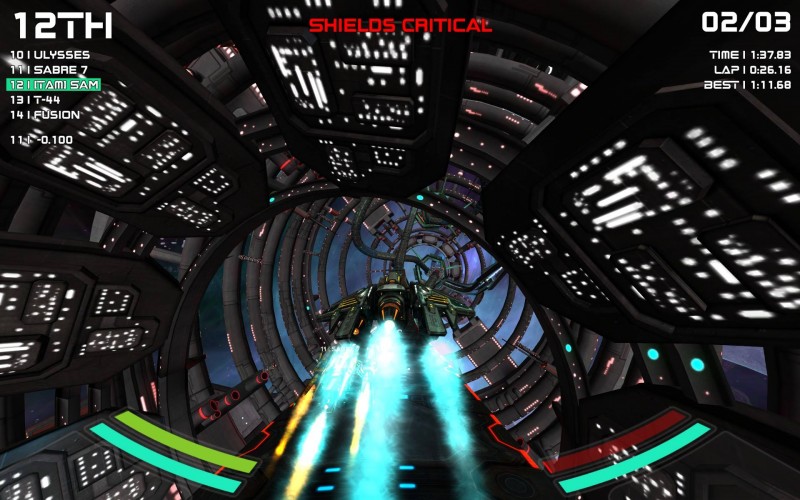 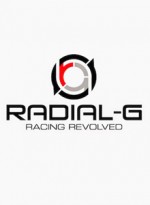 Radial-G is your classic launch title: a game with a few tricks up its sleeve that get too worn, exposing itself before long.

Purchase More Info
6.5
i
Game Informer's Review System
Concept Race around the great cosmic worm in the sky, hitting boost pads and avoiding crashes and energy gates
Graphics Anything could happen in a futuristic setting, but it doesn’t. The tracks have a surprisingly similar look
Sound Not much going on here, barring an announcer who only says, “Warning”
Playability The HUD can be a little hard to read during races, but the full field of vision is helpful when sizing up oncoming turns
Entertainment The game nails a few concepts, but does not evolve beyond that
Replay Moderately low