The thrill of a good puzzle is something of a mystery. Many gamers enjoy brainteasers, but the act of solving one is rarely enjoyable. A good puzzle makes us stretch the analytical parts of our brain in ways that sometimes feel like work. An unsolved puzzle makes us feel stupid and incapable. Being stuck without a solution is uncomfortable, and yet after we reach that “Eureka!” moment, all is forgiven. All those uncomfortable moments spent pulling our hair and biting our nails were worth it, because that brief second of insight has proven how clever we are. Quantum Conundrum is a game filled with these seconds. It gives your brain a workout, but you’ll love it.

It’s hard to talk about Quantum Conundrum without drawing comparisons to Portal. Not only is the game’s creative director, Kim Swift, one of the DigiPen students Valve originally hired to create the Portal series, but the game has you wandering through a series of rooms and solving physics-breaking puzzles while a disgruntled, disembodied voice walks you through the experience.

Fortunately, Quantum Conundrum has enough going for it that it stands on its own. The main protagonist is a 12-year-old boy who comes to visit his uncle, the brusque Professor Fitz Quadwrangle, at his mansion laboratory. A failed scientific experiment has trapped the professor into a pocket dimension. Using the professor’s latest invention, the Interdimensional Shift Device (IDS), you work your way through his twisted mansion, solving puzzles by flipping through a series of oddball dimensions, and eventually returning the professor to reality. The professor talks you through the history of his manor with some occasionally amusing dialogue, but the narrative isn’t this game’s strong suit.

Quantum Conundrum’s main attraction is its dimension-jumping puzzles. Using the IDS device, you can shuffle through four different dimensions, each with its own unique properties. For example, the fluffy dimension turns everything softer than a roll of Charmin, while the heavy dimension makes everything 10 times denser and heavier. The puzzles make creative use of these dimensions. In one room you might have to reach a high ledge. If you switch over to the fluffy dimension you can drag large pieces of furniture over an industrial floor fan and hitch a ride as it floats towards the ceiling like a feather. I loved discovering how these dimensions worked in conjunction with one another. To get across large gaps, for example, you can switch over to the fluffy dimension, pick up a heavy object and throw it, then switch over to a dimension where everything moves at a snail’s pace and use the suspended object as a floating platform. These dimensions work together in a number of ways, but figuring out how they play off each other is half the fun of solving Quantum Conundrum’s brainteasers.

Serious puzzle fans will be happy with some of the late-game challenges, which require thinking outside the box. I just wish the game relied more on creative thinking and logical problem-solving, because many puzzles involve a significant amount of manual dexterity, requiring you to time your throws or land on a specific platform. I enjoy platform jumping, but the platforming isn’t as polished as the dimension-altering mechanics. A number of times I missed a jump because the controls didn’t feel tight enough to facilitate this kind of gameplay.

With its physics-warping mechanics, thoughtful brainteasers, and playful atmosphere, Quantum Conundrum should appeal to the legions of Portal fanatics. Some may complain that it’s not as funny or as clever as Valve’s hit series, but Quantum Conundrum is a unique experience that deserves attention nonetheless. 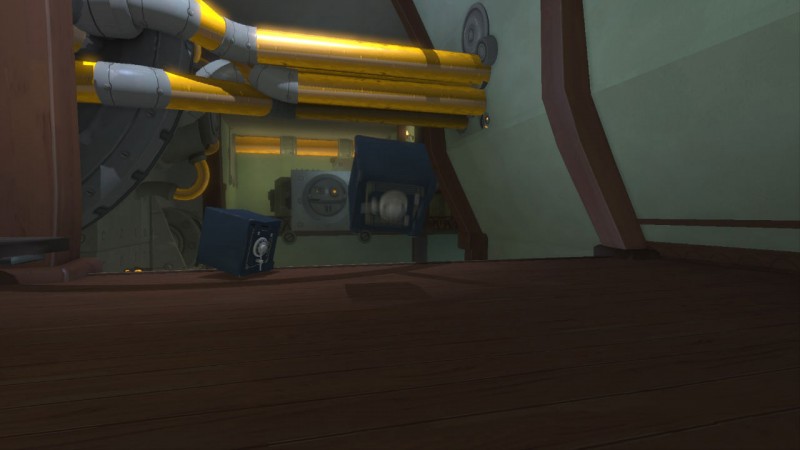 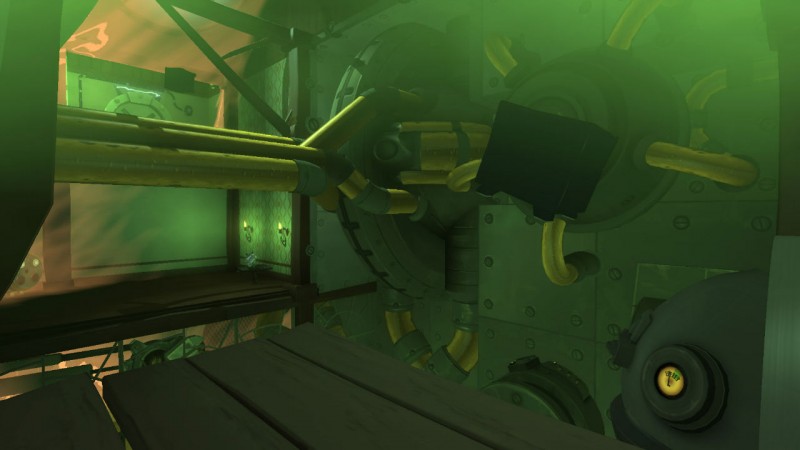 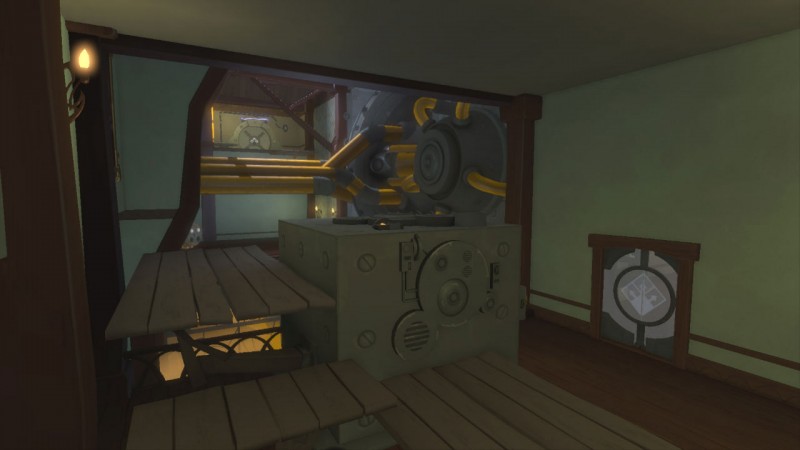 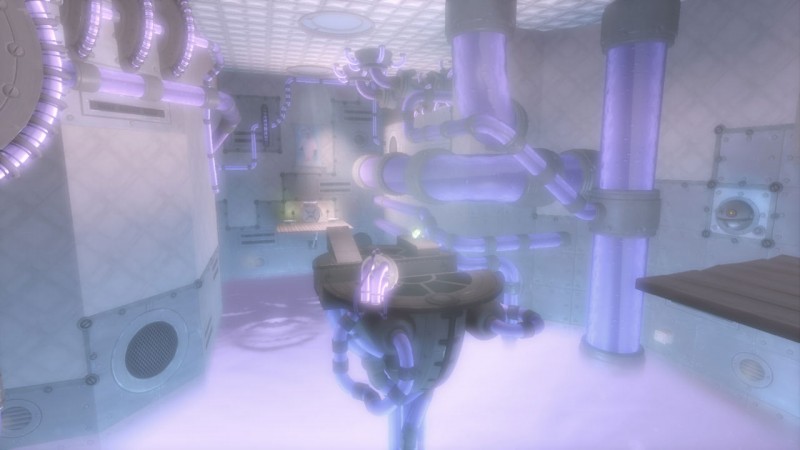 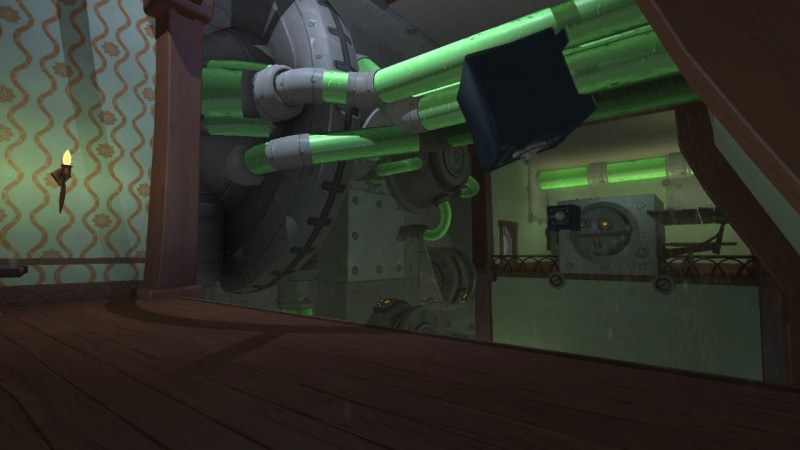 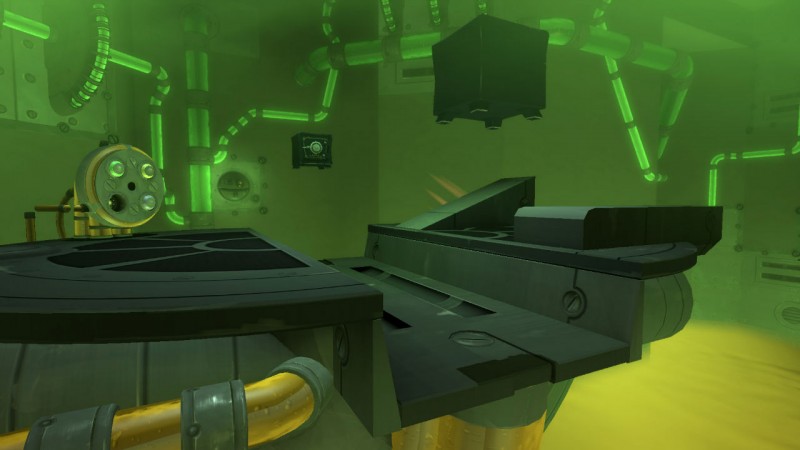 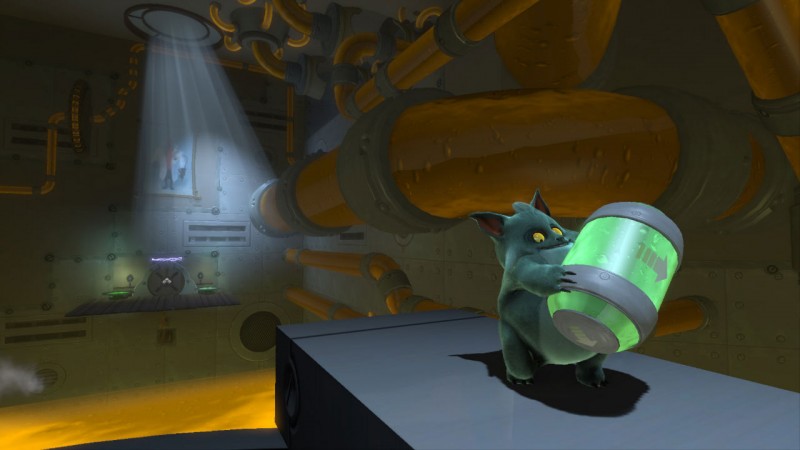 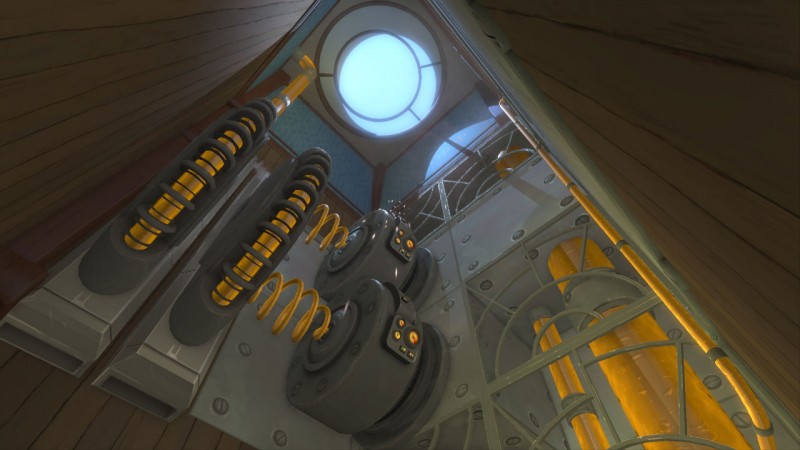 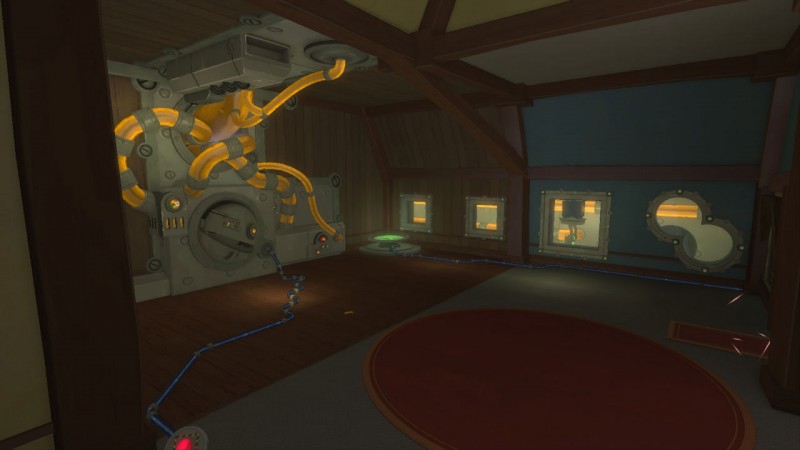 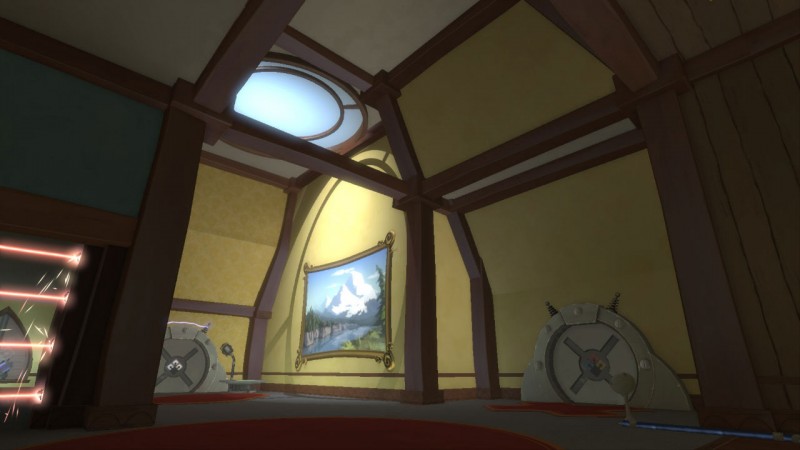 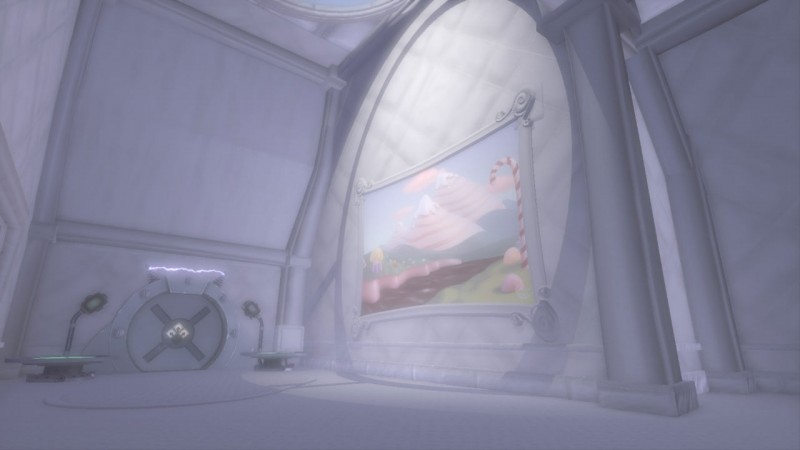 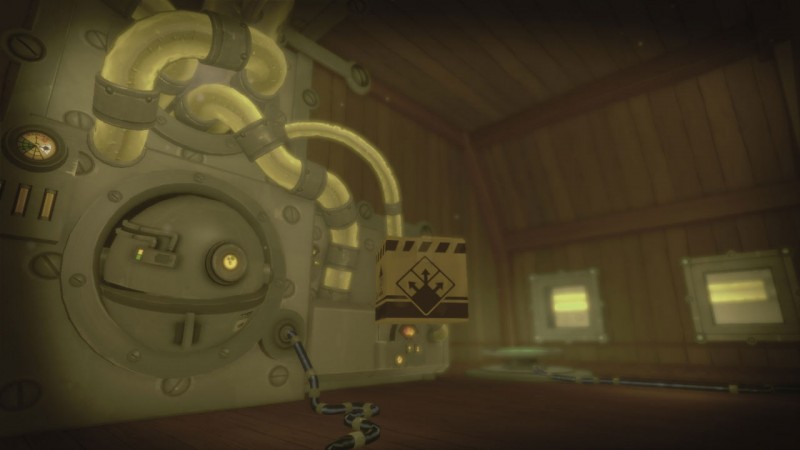 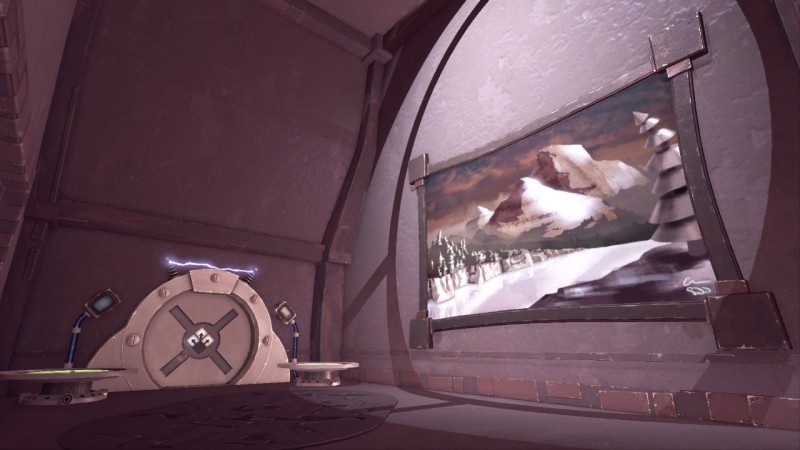 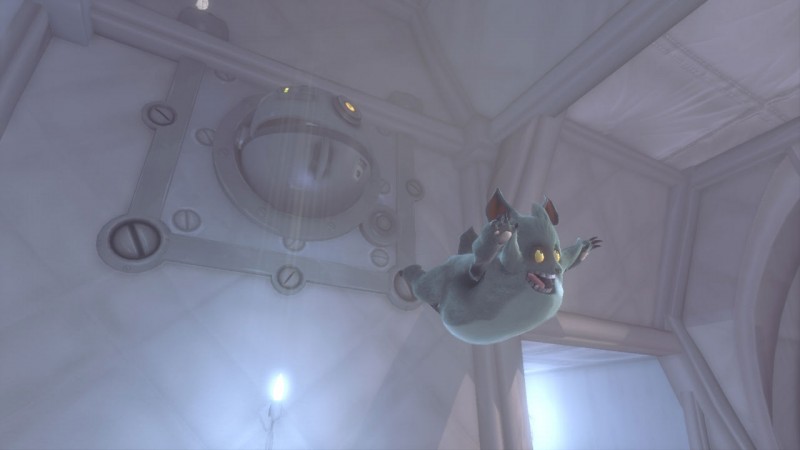 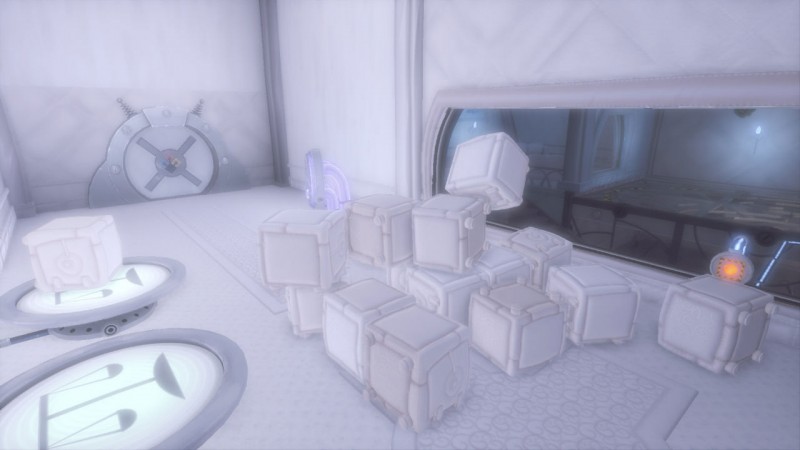 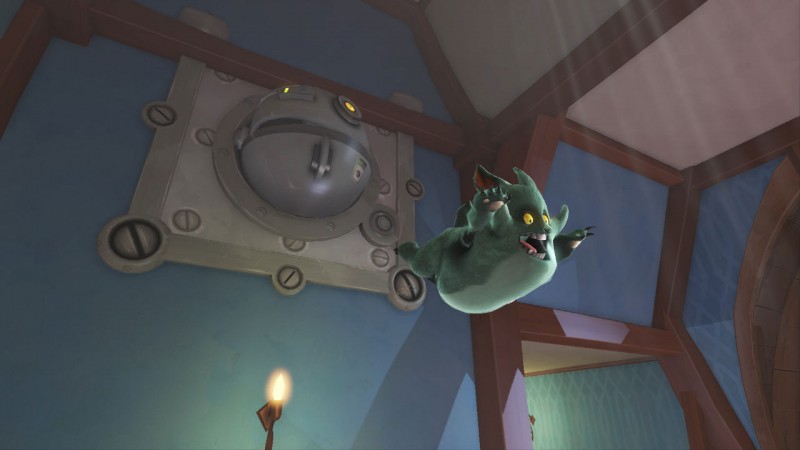 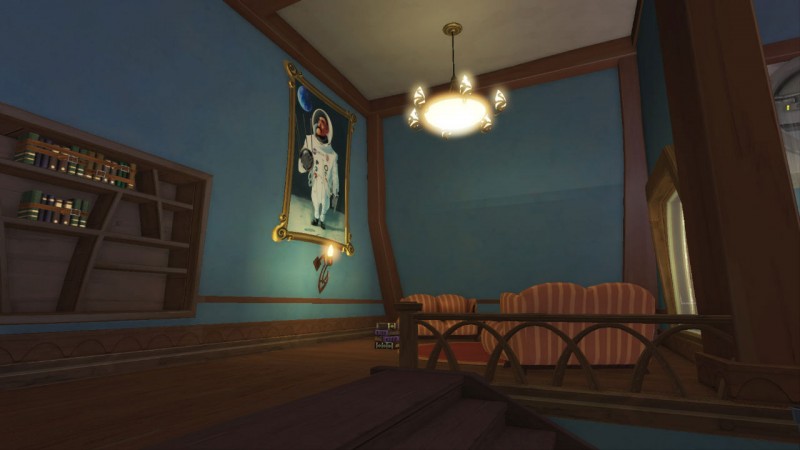 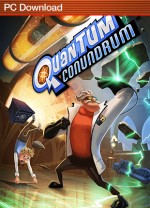 Quantum Conundrum is a game filled with Eureka moments; it gives your brain a workout, but you’ll love it.

Purchase More Info
8.5
i
Game Informer's Review System
Concept A Portal-style game that lets players warp the density of objects, slow down time, and alter gravity. Mastering these dimensions will help you navigate a neurotic professor’s labyrinthine mansion
Graphics A simplified cartoon design gets the job done, and it’s fun to see how the design of environmental objects – especially wall paintings – changes through the four different dimensions
Sound Actor John de Lancie does a great job portraying Professor Fitz Quadwrangle. The game’s music is playful if largely unmemorable
Playability Plaforming moments could use some work, but cycling through dimensions and testing how they work is easy and fun
Entertainment It’s a lot of fun to switch through four different dimensions (five if you count our own) and experiment with how they play off each other. Solving some of the challenging late-game puzzles is also highly rewarding
Replay Moderate