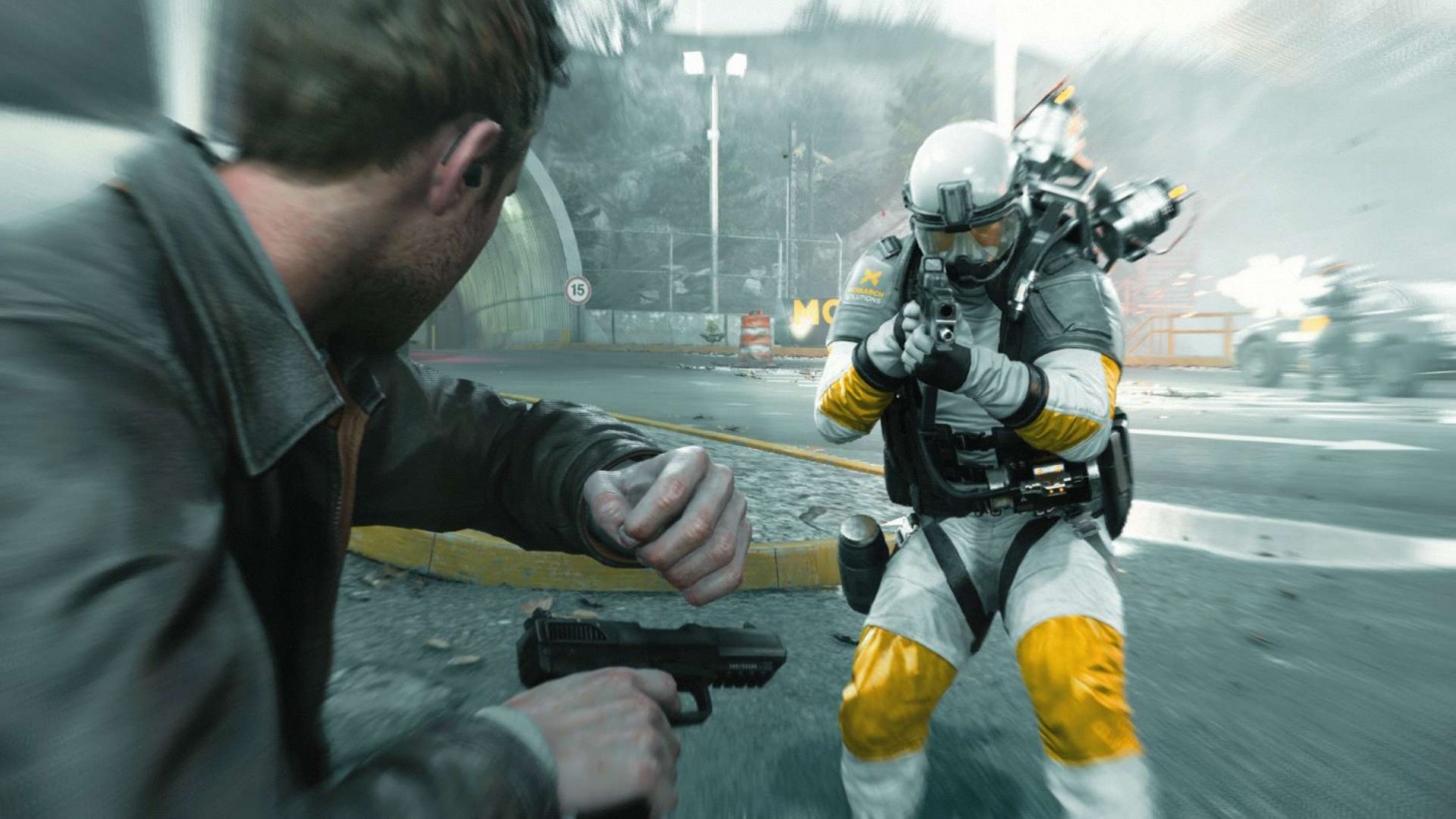 Peanut butter and chocolate. Thunder and lightning. Country music and painful road trips. Some things go really well together. Television and video games aren’t two of those things. Only a few developers have experimented with combining the two mediums, but television/game crossovers never feel like more than the sum of their parts. The closest I’ve ever gotten to an entertaining game/television experience was watching South Park reruns while playing the South Park game. Quantum Break combines these two media in a new way, including a short-run television series in the middle of a third-person shooter. Unsurprisingly, the show does little to elevate Quantum Break as a game, but the action in this time warp is strong enough to stand on its own.

In previous games, developer Remedy has attempted to tell character-focused narratives in the midst of frantic firefights. While I enjoyed Max Payne and Alan Wake, those stories felt ham-fisted and overwrought. In contrast, Quantum Break is Remedy’s best script to date. The story of Jack Joyce is a pulpy sci-fi tale about a failed time travel experiment that grants two men the ability to manipulate time, and their subsequent battle to save timespace from complete collapse. Throughout this journey, Remedy explores the “rules of time travel” in an interesting way and hints at a larger world through scattered emails and other pieces of ancillary story content that I was actually interested to read. The cast of established actors like Aidan Gillen and Lance Reddick also help bring depth to each character, and a few plot twists hold genuine emotional weight.

These interesting story moments are surrounded by impressive time-altered shootouts. Early on, you gain a suite of clever time manipulation powers, such as the ability to create a time shield that slows bullets around you, and a time rush move that essentially turns you into the Flash. All of these powers encourage you to jump out of cover and mix it up in the environment. I loved dashing through the world until my enemies lost track of my position, and then getting the drop on them with a blast of time powers before slipping away again. Your time powers are so diverse that each combat encounter can easily play out in a variety of different ways and the cool downs on each power encourage you to use your full suite of powers while recharging fast enough so that you always have at least one ace up your sleeve.

Some of my favorite moments came when the action slowed to a stop. As time breaks down, it creates a series of time stutters, which are essentially pockets of frozen space. I got an almost voyeuristic thrill walking through office buildings, looking at business professionals frozen in mid flight after tripping over a rug or checking their dating profiles in the middle of a meeting. However, as time continues to degrade it creates dangerous situations where objects become out of sync with the rest of the world and start colliding with each other. I practically held my breath while racing under a train that was stuck in a repeating cycle of smashing into a skyscraper, and I felt a rush of vertigo while platforming across a series of frozen road signs suspended in the air after a cargo vessel sideswiped a drawbridge.

It’s a good thing that time is so much fun to play with, because Quantum Break’s weapons are incredibly generic. There are machine guns with full auto and machine guns with burst fire, but they all feel like interchangeable bullet hoses. The other big disappointment was the final, and only, boss encounter, which is a trial-and-error experience of one-hit-kill attacks that are not significantly telegraphed.

Though it holds its own as a game, you can’t talk about Quantum Break without mentioning the accompanying television show. Throughout the game, you’re interrupted by four live-action mini dramas that flesh out the happenings within the villainous Monarch Corporation. These episodes feel like the kind of disposable TV dramas that are ubiquitous on low-rated cable networks. The show spends most of its time focusing on characters who don’t get much game time, which makes the events feel even less significant, if not meaningless. Even so, because your actions in the game can shape the events of the show, I looked forward to the episodes in an odd way. Unfortunately, your actions usually only result in trivial changes to the show. For example, you might broadcast something over the enemy’s radios in the game, and this chatter can be heard during a scene in the show, but these moments have no lasting significance.

Quantum Break isn’t a perfect game; it’s a bold experiment in how two mediums can tell a larger story, and at times it pays off. It would be foolish for every game to attempt to emulate this form of storytelling, but Quantum Break as a gaming oddity deserves attention. I wish the events of the show were more significant to the main story, but Quantum Break more than makes up for that with some of the best storytelling and gameplay Remedy has ever produced.

For more on the development of the game, including video interviews with the team and a special edition podcast, click on the banner below to visit our Quantum Break hub.

A live action show does little to elevate Quantum Break as a game, but the action in Remedy's time warp is strong enough to stand on its own.

Purchase More Info
8.5
i
Game Informer's Review System
Concept Tell a unique time-travel story through a third-person shooter and a television show
Graphics Remedy’s time-manipulating effects are truly impressive, and the characters look great. However, seeing real-life actors juxtaposed with their in-game counterparts is jarring
Sound Suspenseful firefights come alive through great sound design, and solid acting work helps bring each character to life
Playability The gunplay feels precise and your wide array of time powers helps keep the action moving even when time isn’t
Entertainment The show leaves a bit to be desired, but the game is full of breakneck firefights and stunning action set pieces
Replay Moderately High