Tetris and Puyo Puyo have both seen countless sequels and spin-offs over the years, but none have been as experimental as Sonic Team's stylish new mash-up. Instead of just bundling the two classic puzzle series with a handful of separate modes, Puyo Puyo Tetris tries to blend the multicolored brick and blob action in new and different ways. Unfortunately, this peanut-butter-in-my-chocolate experimentation ends up being the least compelling part of the game, making the package as a whole underwhelming.

If you're just looking for the opportunity to play two of your favorite puzzle games on your new Nintendo Switch, you can stop reading this review and go pick up Puyo Puyo Tetris right now. While I have a few qualms on the Tetris side of things (more on that later), the colorful visuals and responsive controls deliver all the classic line-clearing, blob-matching action you could want. However, most Tetris and Puyo Puyo installments also offer up some new and clever twists on their decades-old puzzle formulas, and that's where this attempt stumbles. Sonic Team tries to merge the two playstyles into an entertaining hybrid, but puyos and tetrominoes simply don't play well together. Tetris is a frenetic race to build up your bricks and throw garbage lines at your opponent as fast as possible. Puyo Puyo is a slower and more deliberate affair; in order to bury your foe, you need to lay down intricate, interlocking piles of colored blobs that trigger huge chain reactions.

Sonic Team never truly bridges this disparity, so modes that treat the two game types interchangeably, like vanilla Versus mode and the power-up infused Party mode, are less fun if one player chooses Puyo Puyo and the other chooses Tetris. Swap, on the other hand, uses the disparities to its advantage, by having players flip between ongoing Tetris and Puyo Puyo matches at timed intervals. The change of pace works well here and feels novel, making Swap my new favorite mode of the bunch. Big Bang is more of a mixed bag, tasking you and your opponent with racing through a series of single-screen puzzles. While the Puyo Puyo side of this mode is challenging enough, the Tetris puzzles are far too simple to keep you coming back after your first few matches. Puyo Puyo Tetris' biggest stumble is its flagship Fusion mode. Players must contend with stacks of puyos and tetrominoes at the same time. However, tetrominoes "sink" to the bottom of your well, causing the puyos beneath them to pop and respawn at the top of the screen. This makes planning out combos virtually impossible, as your layers are constantly shifting. Fusion matches offer some chaotic fun, but largely forsake the skills and strategies the two game types are built on, making it my least favorite of the modes.

Puyo Puyo Tetris also has a lengthy story mode, but even going into it with subterranean expectations, I was struck by what a waste of time it is. The "story" is just an endless string of cameos of characters from previous Puyo Puyo games, who find the flimsiest of excuses to battle all-new Tetris characters. The dialogue is rarely funny, the characters are bland anime clichés (save for a few fun animals), and the story ends with the mother of all shoulder shrugs. As such, Puyo Puyo Tetris comes down to its modes, which aren't as plentiful or unique as those found in other installments of the two series. Hardcore Tetris fans may also be disappointed by the lack of options; as with many modern Tetris incarnations, the game offers no ability to turn off easy spin, and the drop speed maxes out at 15G. I'm far from a Tetris Grand Master, but even when making a ton of embarrassing mistakes, I was able to play endless mode...endlessly. If you're looking for a Tetris game that pushes your abilities to the next level, keep on looking.

Ultimately, Puyo Puyo Tetris still includes the ability to play classic Tetris or Puyo Puyo to your heart's content, and that core gameplay remains as fun and absorbing as ever. While that's probably enough for most fans to justify the purchase, I wish the new flavors were more appetizing. 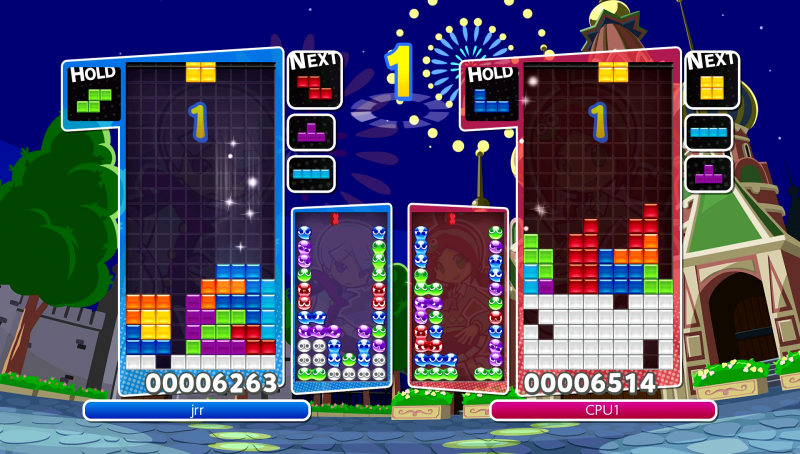 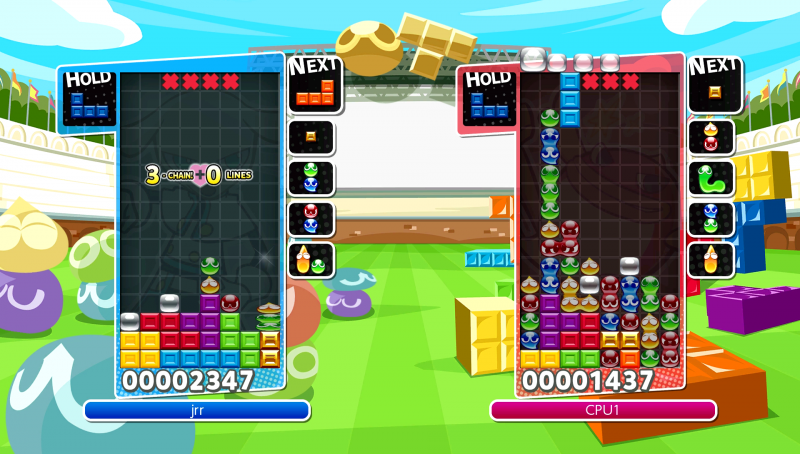 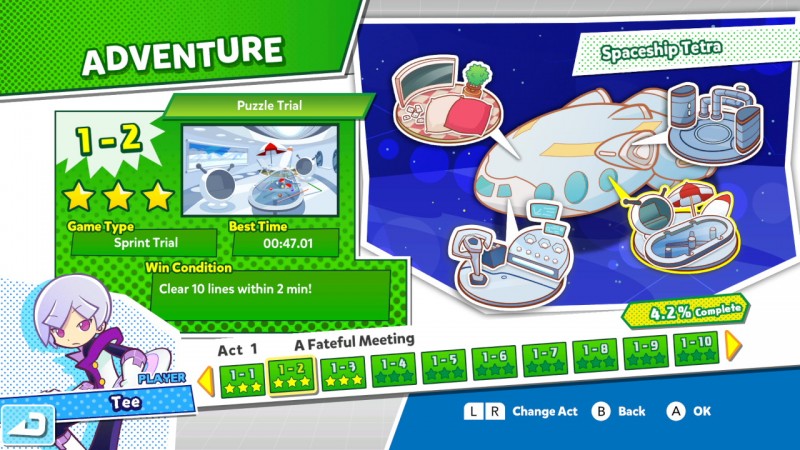 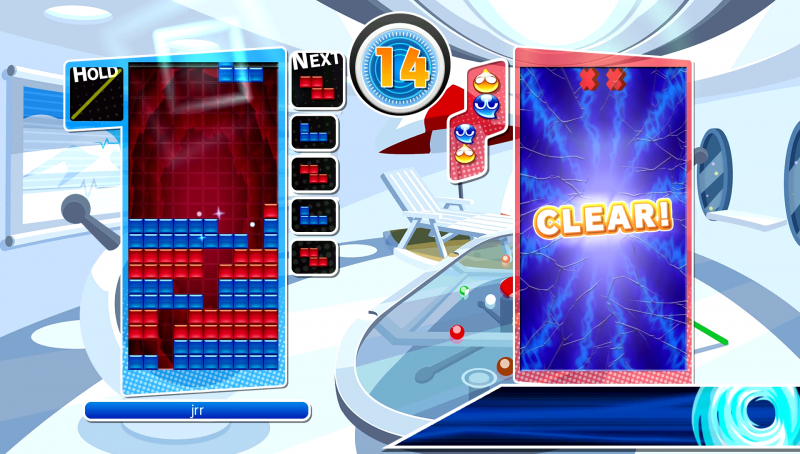 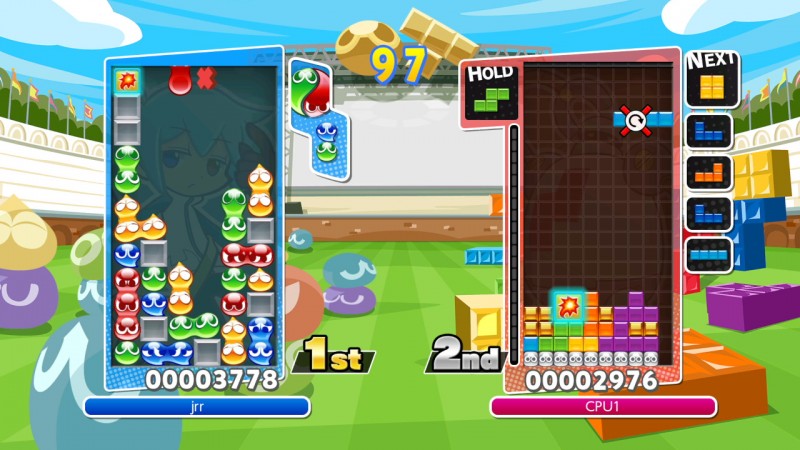 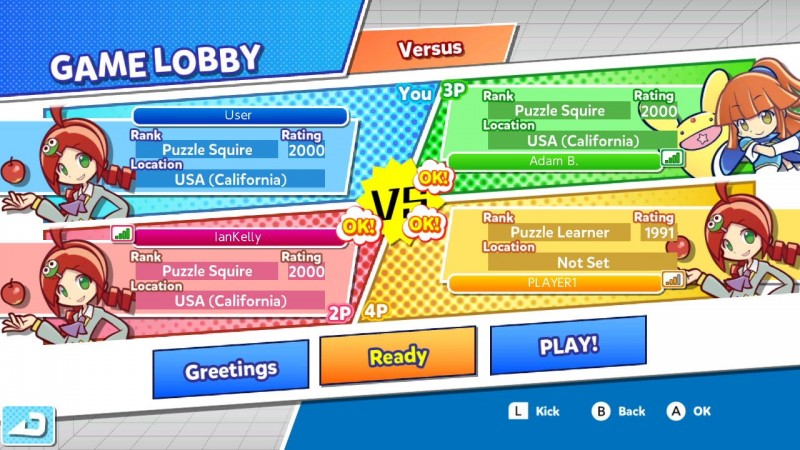 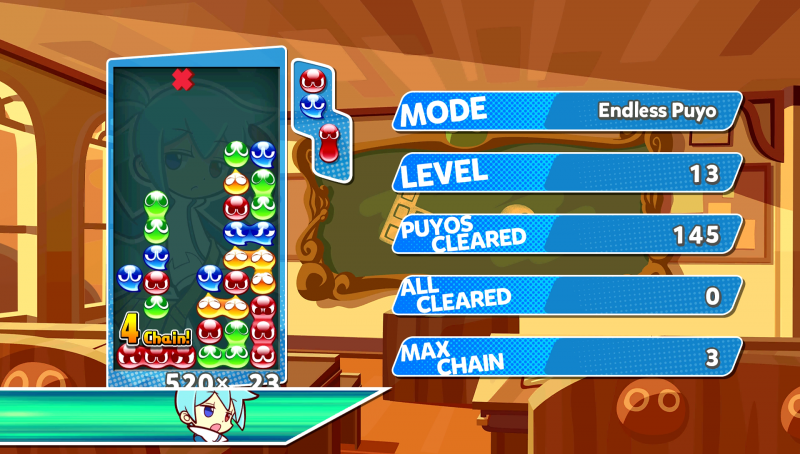 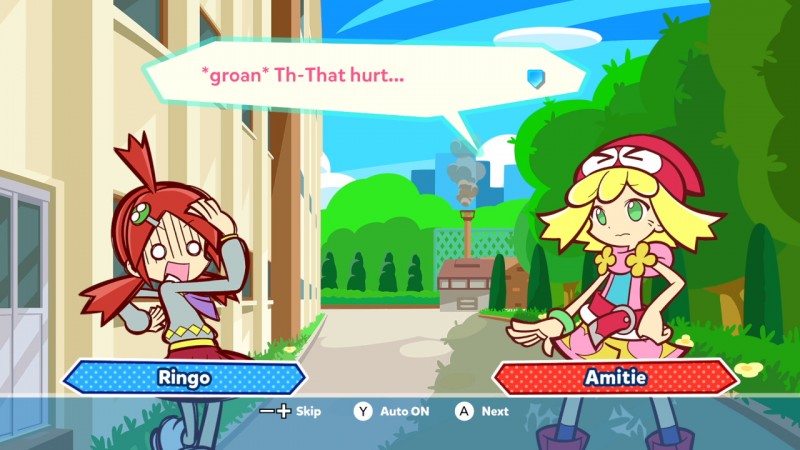 7
About Game Informer's review system
Concept
Mix tetrominoes and puyo blobs together in a handful of new and classic modes
Graphics
Crisp visuals are augmented by the ability to unlock different art styles and backgrounds
Sound
Puyo Puyo Tetris' voice acting is predictably hammy but competent. The music offers some fun riffs on the classic Tetris theme
Playability
The Switch's directional buttons offer fast and precise brick/puyo placement. Using a single Joy-Con during local multiplayer battles doesn't fare as well, but at least everyone is on the same playing field
Entertainment
The classic Tetris and Puyo Puyo action is enjoyable, but the new modes are letdowns
Replay
Moderately High