Japan Studio Delivers A Rousing Stage Performance
by Jeff Marchiafava on Sep 09, 2013 at 09:39 AM With all the talk of next-gen systems and the holiday's upcoming blockbusters, Puppeteer hasn't had a lot of time in the spotlight. Thankfully, Japan Studio's quirky platformer doesn't need long to draw its audience in; while the unique gameplay mechanics wear thin in the last few hours, Puppeteer's superb presentation and production values are enough to keep you engrossed until the final curtain call.

Puppeteer's theatrical motif permeates very aspect of the game, and is used to great effect. Entire levels slide and drop into place like stage scenery, a narrator moves the story along from scene to scene, and an unseen crowd gasps, laughs, and applauds throughout Kutaro's lengthy quest to thwart the evil Moon Bear King and save the stolen souls of his adolescent puppet brethren.

Ultimately, Puppeteer's goofy story is less important than its cast of oddball characters. Armed with the legendary Calibrus (read: magic scissors), Kutaro snips his way through a zoo's worth of memorable boss animals on his way to confronting the Moon Bear King. Each of the evil ruler's dozen generals is complemented by its own set of creative levels that culminate in a multistage boss battle. Don't be fooled by the wooden-doll character models, either; Puppeteer is a gorgeous game thanks to Japan Studio's exceptional animation work and a diverse collection of environments that are packed with interactive objects. The boss fights are especially impressive, even if they rely on quicktime events too much.

As beautiful as the visuals are, Puppeteer would fall flat without quality voice acting. The voice cast is more than up to the task, offering up humorous soliloquies, character impressions, and even a surprise musical number without missing a beat. Stephen Greif steals the show as Puppeteer's off-screen narrator, providing a level of enthusiasm and gravitas rarely seen (or heard) in video games. Some characters can be a bit hammy and annoying at times, but their performances mesh with the bombastic onstage theatrics. In addition to its unique presentation, Puppeteer introduces a number of fresh gameplay ideas. After the Moon Bear King steals his wooden noggin, Kutaro must find and collect replacement puppet heads to stay alive. Kutaro can juggle up to three heads at a time and switch between them on the fly. Each head has a custom animation that can trigger helpful environmental changes, rewards, or bonus levels when performed in the right place. A few hero heads also imbue Kutaro with permanent abilities, such as a hook that can latch onto enemies and objects in the environment and a projectile-deflecting shield. Kutaro's fairy companion, Pikarina, adds another layer of complexity; you control her with the right analog stick (or Move controller), and can use her to interact with certain objects and uncover secret gems. A second player can also take over Pikarina, which provides a simpler gaming experience for casual co-op partners.

Kutaro's magic scissors fuel Puppeteer's most unique gameplay mechanics by allowing you to snip through all manner of fabric, webbing, foliage, and pretty much anything else gets in your way. You can control the direction of your scissors, and cutting an object mid-jump causes you to float for a second and propels you forward. This allows you to snip your way through the air with ease provided you have a trail of floating paper clouds, falling feathers, or other sliceable objects to sustain your momentum.

As neat as Puppeteer's snipping mechanics are, they do get repetitive. Japan Studio does a good job of introducing new abilities throughout most of the game, but you'll use each one a hundred times before the adventure ends. While the numerous boss fights each have their own unique twists, combat against the basic grub enemies is one-dimensional and dull. I also ran into a few unforgiving checkpoints, which made some already difficult sections of the game all the more frustrating. Even seasoned gamers will become intimately familiar with the continue screen.

Despite a few setbacks, Puppeteer features all the entertainment and creativity I've come to expect from Japan Studio. Sony has another exclusive title it can be proud of, and while Puppeteer may not take center stage in the company's holiday lineup, fans of family-friendly adventures won't want to miss it.

8.5
About Game Informer's review system
Concept
A creative platformer presented to players through the guise of a theatrical puppet show
Graphics
With its cutesy art style, Puppeteer is a visually arresting game
Sound
Top-notch voice acting and music sell the onstage action
Playability
Controlling Kutaro and Pikarina at the same time can be challenging, but the snipping mechanic works like a charm
Entertainment
Puppeteer delivers a lengthy adventure, plus a handful of meaningful bonus content
Replay
Moderate 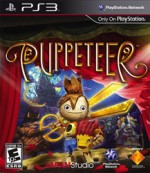