When teams gain promotion to the top division they enter into a brand-new world. They become minnows in an ocean dominated by world-class teams who spend big money and expect to go deep into the Champions League every year. Even though Konami started its upgrade last year on the PS3 and Xbox 360 by using the Fox engine for the franchise, the series' debut on the PS4 and Xbox One is a promotion into a higher tier that demands Pro Evo rise to the occasion.

After years in the wilderness, Pro Evolution's feature set finally has a destination mode. The intricately structured online myClub mode replaces the online Master League, and building your dream team is a rewarding mix of good fortune and hard work. Managers (including some licensed ones) determine your tactical options, wage cap, and the chemistry template which players fit in to raise your overall team spirit. Agents are used to sign players, and multiple agents can be used to get better players or ones that fit more specific criteria. The fun thing is, apart from the parameters you've set by which agents you've selected to use (like a player's position), you don't know exactly what player you're going to get.

The game has microtransactions, which can provide high-level agents or re-up your players' contracts and fatigue levels, but you can earn enough of the regular currency (GP) that the mode's fun squad-building spirit is not disturbed. Players' stamina recharges if they're on the bench, you can earn GP for in-game actions and in other modes, and you can play matches against the computer (which uses A.I. approximations of real-players' teams) or try and climb the divisions structure against others online. The flexibility and interaction of myClub's moving parts make it challenging, delivering a go-to online mode (there are other online modes as well) for the first time in the series' history.

The offline Master League has undergone changes, but they aren't impressively deep and the mode is not as interesting as myClub. The ability to scout players is nominal, and the mode's one contribution is its expanded negotiation options. You can go back and forth over clubs' transfer fees and players' salaries – including the option to pay players an appearance fee that affects your team's bottom line. Perhaps more importantly, the expanded roster of licenses includes those for the French and Italian second divisions and real players (on fictional teams) for the English second division, adding some heft to the Master League.

PES 2015's modes are starting to turn the corner, and the gameplay has also made progress, but it's in fits and starts. Player acceleration and dribbling feel good compared to last year, but players can take some unnecessary extra touches, shots can be slow to get off, and winning possession of the ball can be pre-determined at times. You can still keep possession while enduring the increased physicality, but on some occasions the collision doesn't register or your challenges have no effect.

A.I. keepers can let in some howlers (particularly down low) and defenses can be suspect, but this is a game where playing against the computer can be challenging (I recommend playing on the higher difficulty levels) because its ball movement and incisive attacks create a game-within-the-game. Disciplined play saves your hide, and exploring the game's more complex controls and tactical options are rewarding and help you break down defenses and become a better player. That's what PES is all about.

In that sense, this is a great PES with which to kick off the new systems – it retains its heart while staking out vital new directions. It's not the largest of milestones and it has its stumbles, but it already puts the franchise on more firm footing than last generation.

This review is based on the PlayStation 4 version. The game also appears on the Xbox One, Xbox 360, PlayStation 3, and PC.

8.5
About Game Informer's review system
Concept
Step onto the new-gen stage with a full complement of modes and improving gameplay
Graphics
Player faces look fine standing still, but they turn unnatural when expressions are added. The game’s lighting can lack nuance and make faces look waxy
Sound
Commentary sticks to the game at hand instead of referring to past matches or any larger context. It does the job but does not stand out
Playability
You can play with as much or as little complexity as you like. Shooting could be more responsive
Entertainment
The game is definitely better than last year and puts the series in good standing, but it’s not a monument for the genre itself
Replay
High 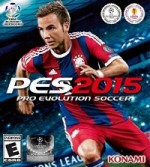