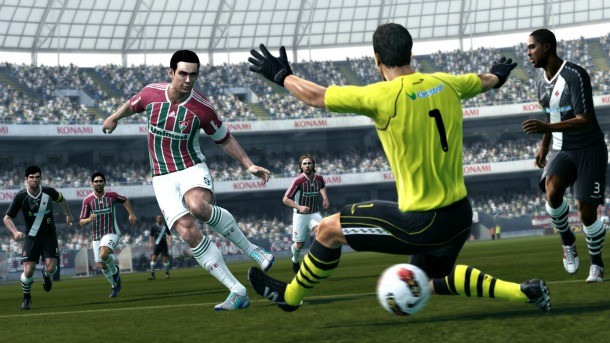 Like other sports franchises in the past, Pro Evolution has already hit its stride as this console generation comes to a close. This year’s game doesn’t feature any big surprises. Instead it makes subtle changes around the edges that take the franchise in new directions.

The changes to the Master League career mode are tactical: sticking to its strengths, minimizing weaknesses, and trying new strategies. Pro Evo 2013 highlights the club and player licenses it has by letting you start out your career with any club in the game, and not just fictional ones as in years past. It also bolsters its considerable player attribute data and progression/regression with equipment and training items you earn online and off

I love this addition because, although it’s improbable that a pair of cleats confers better stats for your players, it shakes up the normal career mode. Konami balances this by limiting the number of slots you have for skill-changing gear.

Unfortunately, Master League axes last year’s communication and Chairman feedback systems, which gave confusing and annoying feedback, instead of fixing them. The player morale system could also use work. I benched star players and they were still happy as clams. Finally, the mode still doesn’t let you play international fixtures (although you can in the largely unremarkable Become a Legend mode).

The series’ top-flight gameplay remains solid and is bolstered by a few new controls. Manual shooting is only for the hardcore, but manual passing has a handy arrow icon that helps you place devastating through-balls and passes into space. This is where where PES shines.

For their part, AI players could stand to be a little more aggressive in cutting out through balls, but they're helpful in clearances and in creating offensive chances. As generally smart as they are, it's strange to occasionally see balls punted straight out of bounds or some weird missed tackles on defense.

Pro Evo's online component isn't as alluring as FIFA's, even with the career/Fantasy Football-esque Master League Online where you strive to build the ultimate side. This year's additions to online play include making it easier to get into matches and finding comparable competition, and a social aspect through easy chat functionality, online communities, and Rival Rankings.

In the great football war, Pro Evo may come up short to rival FIFA when it comes to an across-the-board feature set, but I think the gameplay is better in Konami’s title. With this iteration Konami is inching the franchise forward by both refining its product while not being afraid to try new things.

Here's a video of some of the new moves in the game via the Training mode.

This year’s game makes some changes around the edges that are both subtle and new directions for the franchise.

Purchase More Info
8.75
i
Game Informer's Review System
Concept PES 2013 is mainly about refinements, but the new equipment system is a cool step forward
Graphics The running animations are still a bit stiff, and the graphics are solid but don’t wow
Sound The crowd does a nice job of responding to the flow of play
Playability From new manual controls to different ways to trap the ball, the series continues to layer on options for those who want to use them
Entertainment The series is still solid on the pitch, and the Master League continues to evolve
Replay Moderately High