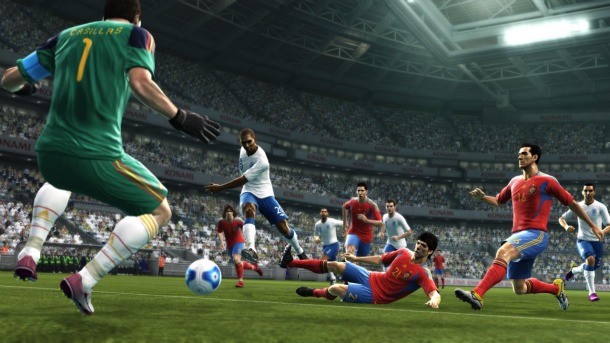 Pro Evolution Soccer has always done it the hard way. The franchise is known for its complex controls, minutia of player attributes, and the fact that it has fewer licensed teams and players than rival FIFA. Regardless, I love the series because it allows me to create beautiful soccer seemingly out of thin air. PES 2012 is no different – warts and all.

Nothing typifies the series’ hard-won philosophy more than the new off-the-ball controls that let you prompt teammates to make offensive runs while you have the ball. You can either pick which player you want to make a run with the flick of a right analog stick (simliar to FIFA’s “Make a Run” button), or you can actually control an off-the-ball player directly (It’s like controlling a WR while you’re the QB). These controls can be difficult to execute, but the sublime moments of offensive brilliance they can create are awesome. They are especially useful on set pieces.

You also get a boost from your AI teammates, even if you aren’t controlling them. They generally do a good job of cutting out opponents’ passes on defense and making offensive runs on their own. AI teams vary their attacks from each other, particularly in their effective use of the long ball to dissect your back line. Defenders will get caught gawking at the ball and the player selection isn’t great, but I can overlook these issues in light of the overall quality of the play.

The umbrella Football Life mode now houses the Master League career mode, Become a Legend individual player mode, and the dry, boardroom-based Club Boss mode. Konami breathed new life into these modes with cutscenes that try to keep you on task and even discuss strategy. Try as The Football Life might, though some depth is naturally lost by the lack of team/player licenses.This cuts down the number of divisions available, and it also doesn’t help that you aren’t offered contracts by other teams. I also wish player info and strategy were better presented, as the career modes still lack an allure to match their substance.

This year’s PES title won’t change anyone’s mind about the series. It hasn’t gotten any less complex, but it also hasn’t lost any of its brilliance. In that sense, its success is all its own.

9
About Game Informer's review system
Concept
The Master League has been given a presentation update, but the real results are in the gameplay additions on the field
Graphics
You’ll notice the Master League cutscenes and appreciate the info they give
Sound
There’s isn’t much that’s notable about the commentary
Playability
Using the off-the-ball controls while you’re playing can be daunting. However, it can produce some awesome results. Also, some shots on goal can be strangely floaty
Entertainment
This still isn’t a series for the faint of heart, but there are some great new features if you care to look
Replay
Moderately High 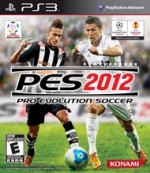