One of the undeniable strengths of EA’s FIFA franchise is its use of licenses. Pro Evolution doesn’t have all the leagues, players, and teams of its competitor (even though it has teams like Manchester United and the UEFA Champions League), but never have I felt like it mattered so little. Perhaps out of necessity, this year’s title offers such a complete experience that I don’t dwell as much on what it doesn’t have as much as what it does so well. Instead of being bummed that it doesn’t have Chelsea, I suggest you grab the controller, break a few ankles with some skill moves, revel in the glory you’ve earned on the pitch, and manage your team to the top.

Pro Evolution isn’t perfect in its gameplay and modes, but after a few years of not being able to adjust to the next-gen changeover, the series is finally coming on strong. The Master League returns with a more intuitive interface, the usual transfers, domestic cups, and UEFA Europa/Champions League. Also, unlike FIFA, this game includes week-to-week form for players and the ability to grow them the way you see fit via earned points. I also like that Pro Evo has a youth system, although it’s disappointing that you don’t really play reserve games – you merely sign the best players to your main team. If you want more of the up-and-comer experience, play the Be a Champion mode, where you try to break into the starting lineup. It’s also the only mode in the game that lets you play appearances for your national squad.

This year the Master League also goes online, letting you sign players off the transfer list with currency earned for playing others online. Like most online modes, you can’t avoid some questionable tactics, and it shouldn’t be too hard for players to create a stacked team even if they lose a bunch. There also isn’t player development, so this online mode is more of a nicety than a necessity for you to experience. 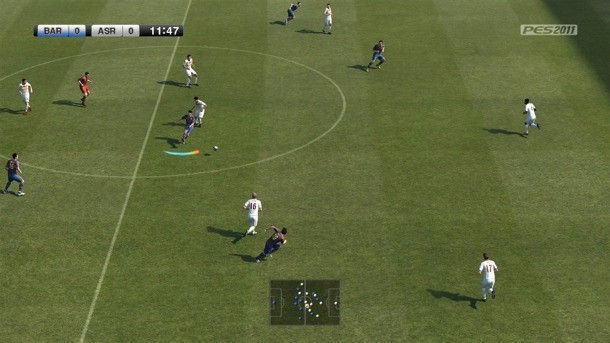 Pro Evo’s fluid skill with the ball, along with its Master League options, makes it a force to be reckoned with. Movement with the left analog is smooth, and it’s easy to control players, even if you’re working in small spaces and throwing in some fancy footwork. This series is known for its difficult controls, but I think they’re only slightly more complicated than FIFA, and you don’t have to use them all to effectively execute an attack.

For those that want to easily pull off skill moves, you can use the linked feint system, which lets you assign up to four back-to-back moves to the four cardinal directions, which are then automatically executed in sequence with a flick of the right analog stick (while holding down the L1/left bumper). As sweet as it sounds to combo a couple of elasticos, a Matthews Feint, and end it with a rainbow kick, I caution against stacking too many fancy skill feints on top of each other because the longer the sequence, the harder it is to pull all of them off. Think of it this way: You don’t want to be the fancy sword twirler in Raiders of the Lost Ark who gets killed by one simple shot from Indiana Jones’ gun. So, while I like the system, I suggest using relatively simple, universally applicable moves. The game’s controls are also versatile enough that you can perform many of these linked feints manually by themselves.

While everyone likes to see someone’s fancy footwork with the ball, the most impressive thing about Pro Evolution’s controls is how I feel like I have the whole world at my feet. If I see an opening down field, it’s easy to ruthlessly exploit gaps in your opponent’s back line with a well-timed through ball. And when I say well-timed, I mean just that. While your AI teammates are really smart at using great angles to run perfectly into space for your passes. making the whole exchange seem sublime. They’ll also easily wander offsides if you don’t deliver the ball when they expect you to. This is one area where I definitely appreciated FIFA’s inclusion of a “start run” command for your teammates. 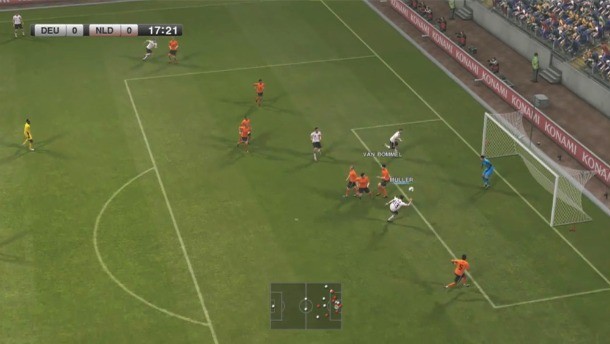 As good as it feels to be in control of Pro Evo’s players, too many times I felt the character select command gave me players in bad positions or the computer would drag a player from across the field and out of position to come get a ball while someone else closer just stood there. In general, like most sports games, the AI can struggle to interpret your intent. Hard passes might fly to an unintended player behind your actual target, players can get caught up in animations that require you to use the super cancel command, and confusion in the box can lead to some slow clearances or duffed shots.

The Pro Evolution series was known as the franchise that is too old school, too hardcore, and a step behind. I think that’s changed, and it’s now in better position for itself and the sport as a whole.

9
About Game Informer's review system
Concept
The Pro Evolution series moves into the modern age. Controlling players finally feels smooth with the analog stick
Graphics
The facial models are better than FIFA’s and the player animations look good
Sound
The commentary is fine, but it’s nothing that really stands out
Playability
The linked feints system lets you pull off special moves easily, but overall it’s still a complex game to control and is a little more difficult than FIFA
Entertainment
This franchise gives you the freedom to execute on the field, and also throws in an online Master League as well
Replay
Moderately High