Last generation, the rival FIFA series just couldn’t put one past Pro Evolution. What a difference a few years makes. Now Electronic Arts’ franchise is more than just a threat to Konami’s venerable enterprise; a full-on war has broken out, with individual battles being won by both sides in an attempt to take lay claim to the title of best soccer game. Pro Evolution Soccer series has slowly moved itself into the next generation, but this year it shores up some of its more glaring weak spots like online play, stiff controls, and the lack of licensed teams and players.
PES 2010 adds more fully licensed teams and players – the UEFA Champions League also returns – but the biggest change comes in the Master League mode. This year’s Master League continues the humanization, so to speak, of the players. You’ll get clues into their thinking, such as if they’re unhappy with their playing time. Furthermore, their development can now be influenced through specialized training, where you can spend money and time to earn your players skill cards corresponding to certain special moves or positional attributes like the being able to perform a one-footed Roulette or improve one-on-one finishing, for example. This kind of individual attention to players (including training your youth squad) is a big plus for the mode, and makes managing your club much more interesting – especially if you’re playing with a team that doesn’t have the real players. Similarly, scouting and playing the transfer market is more fleshed out than before.
Pro Evolution fans will be happy with these changes to the Master League, but newcomers may find FIFA to be a more satisfying gameplay experience. While there isn’t much you can’t make your players do in Pro Evolution, getting them to do it is another thing. Like in games past, this year’s title demands a requisite amount of skill and knowledge with the controls that can be overwhelming. This can influence your moment-to-moment play, as there are times when you player feels out of your control because some subtle commands are beyond your knowledge.
Even for those of you with a stockpile of Pro Evolution moves down pat, the game still hasn’t fixed those moments where your player feels like he’s on rails or magnetically moving. This is nothing new for fast-paced sports video games, but a little more work in smoothing things out could make a huge difference. Jostling the ball carrier while he’s running or fighting for a header, for instance, feels better in rival FIFA than it does here.
The series has attempted to address its online lag and bug problems to varying degrees of success, and its community hub is the big new feature. Here you can congregate with your friends, create a league, and keep stats. You can also bring your created player from Be A Legend mode online if you want. The online aspect of Pro Evolution is definitely improved, but it’s not as good as FIFA’s full 11-on-11 online.
It’s tough to say which is better, Pro Evolution or FIFA, given that the former has more depth while the latter comes off as the sexier experience. Perhaps these two will continue to do what they’ve done in the past – appeal to slightly different sets of players – which means the war for soccer supremacy wages on. 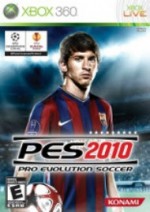 Konami's Pro Evolution Soccer 2010 gives rival FIFA a run for its money with this solid outing.

Purchase More Info
8.5
i
Game Informer's Review System
Concept Similar to FIFA 10, a lot of the improvements are under the hood instead of in your face
Graphics The players look better than they do in FIFA, and the presentation for the UEFA Champions League is pretty cool
Sound Play-by-play man Jon Champion is good, although you don’t hear much from his color commentary sidekick Mark Lawrenson
Playability The game puts a lot of moves at your fingertips, but you still have to be a hardcore player to get close to using many of them
Entertainment While changes to the Master League mode are welcome, the gameplay on the pitch still needs some further tweaking
Replay Moderately High