A Wizard On The Links
by Andrew Reiner on Nov 18, 2013 at 02:00 AM
Publisher: Microsoft Game Studios
Developer: Zoe Mode
Release: November 22, 2013
Rating: Everyone
Reviewed on: Xbox One Powerstar Golf treats clubs like prized weapons in a role-playing game, golfers like the knights and wizards who wield them, and caddies like mages who enhance abilities from afar. Most of the golf courses are grounded in reality and look like places the PGA might frequent, yet an element of fantasy hangs over their beautifully manicured greens and dangerous waters.

In one round I played, my opponent wielded a club made of illusions, a magical shimmering mirage empowered with the ability to crush a ball over 260 yards. As the shot dipped for landing, it sparked, popped, and multiplied into five, each landing in different spots on the fairway. The ball that was closest to the green ended up being his spot. I countered this wizardry with a little magic of my own – a rocket swing produced by a gas-powered driver, sending the ball flying at such a great velocity it appeared to be tearing a hole in the fabric of reality. My shot soared over his ball and kissed the green, setting up an easy birdie and victory. This exchange of powers may sound odd for golf, but it generates excitement, strategy, unpredictability, and a uniqueness that makes Powerstar Golf an absolute delight to play.

I know I'm painting this experience to sound a little bit like "Harry Potter and the Order of the Links," and it is to a degree. However, developer Zoe Mode has forged an excellent golf simulation at the core, drawing heavy inspiration from Sony's long-running Hot Shots series. Magical powers are limited in use for each golfer and caddy, and cannot be used on every hole. Do you exhaust them early on, use them to take risk shots, or save them to make a late push against a tough foe?

Most of your time is spent playing a normal game of golf. To excel, you need to read wind trajectories, determine the best approach to the green, apply spin to certain shots, and strike the ball with accuracy. Powerstar Golf's shot meter is a blast from the past, making use of a three-click system on a horizontal bar to start the swing, determine its power, and ultimately put metal on the ball. If you are a hair off in your timing, you either pull or push your shot. The amount of error determines the severity of the hook or slice.

Putting is equally nostalgic, showing the flow of greens through a grid overlay that uses moving dotted lines to detail elevation changes. It's easy to determine when you need to put a little more muscle or finesse into a putt.

Both shooting mechanics work well, and lead to a precise and fun golfing experience that moves along quickly. I was a little annoyed by the slight delay in altering the shot trajectory, but the flight of a ball can be skipped with a press of the button. Rival golfers' turns go quickly as well, even though you are forced to watch their shots.

Only four 18-hole courses are offered at launch, but that doesn't mean Powerstar Golf is light on content. Career mode is a moderately long series of mini-events, consisting of 18-hole tournaments, skins games, and groupings of specific hole types, like par 3s. Bronze, Silver, and Gold medals are rewarded at the end of each of these challenges, depending on how you fared. I mostly received bronze and silvers, as golds sometimes carry difficult requirements, like landing all approach shots within 10 yards of the pin.

All four courses are beautiful constructs, blending scenic and artful environments with deviously designed fairways and hazards. I held my breath every time I drove on Rocky Ridge's tenth hole, which offers only a narrow runway of green surrounded by water. A monorail cuts across several of City Park's holes, which deliver a few questionable "maybe I can make this shot with topspin" moments. Burning Sands' lava-soaked holes are filled with elevation changes, and a great par 3 that requires a hook and a prayer to reach the green. I didn't find a hole I didn't like...just many that destroyed my scores and had me searching for better approaches. Now the bad news: There isn't much in terms of terrain dynamics tied to bunkers or long grass. Your ball is never buried in sand, and all rough patches are easy to blast out of without the help of a pitch or chip swing.

Not all of the courses or challenges are open from the outset. Holding true to that RPG comparison, you have to level up to unlock new destinations. Experience points are earned on each shot, hole, and challenge. Performing well leads to a steady stream of new content unlocking. If you play everything that is thrown your way, you should be able to unlock it all without having to grind too many previously played stages for XP.

Experience points aren't the only rewards earned through play. You also obtain money that is used in an odd and addictive way. You can't purchase gear or clothing outright. You can't even purchase specific goods you want. The only buying options are packs of cards containing a random assortment of items. In one pack, you might get a new wedge for your character, a driver for a different character, a new ball, and a slew of different booster cards for XP, putting, and striking, as well as an item that can reduce the severity of hooks and slices.

Players will likely earn enough money in one event to purchase the low-end booster pack (selling for 1,000). This pack hands out three cards with a low chance of getting something rare. The packs players are going to want are of the Pro, Elite, and Extreme varieties, selling for 6,000, 15,000, and 60,000 respectively. The Extreme pack is the true prize, consisting of five extreme items (the equivalent of purple or orange rare drops in RPGs), but earning the funds to afford it takes time.

If you want to speed up the process of getting excellent gear, you can dive into Microsoft's store for in-game purchases. An Extreme pack will set you back around $7 (though final pricing may change). I know this is ridiculous, but as much as I wanted better gear, I didn't feel like I needed it. The importance of your golfing skills outweighs the impact of gear. Better clubs increase shot distances and improve striking abilities, but with a little luck in the blind packs, most of these items will come the old-fashioned way: by playing the game.

Powerstar Golf doesn't offer online gameplay, which is odd in this day and age of sports gaming, but does support local play for up to four players. The only online option is Rival mode. Here, your best round on each course is saved. Friends can try to beat the score you posted. I enjoyed this mode quite a bit, especially since it's set up like a traditional head-to-head game. Although you are just watching a recording of your friend's shots, you see how they achieved their scores.

Zoe Mode is new to the golf scene, but Powerstar Golf plays a like a seasoned pro, nailing most of the fundamentals of the sport, and establishing its own identity by applying little magic to a gameplay formula we know well. 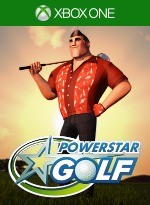 Purchase More Info
8
i
Game Informer's Review System
Concept Zoe Mode graces Xbox One's launch with a spellbinding golf simulation
Graphics A beautiful game that doesn't scream next gen in its details. Courses balance beautiful aesthetics with harrowing shot trajectories
Sound Caddies are annoying helpers who repeat the same quips about the wind over and over again. A nice touch: If you start your shot while they are talking, your golfer will tell them to shut up
Playability Hot Shots' old-school style of play is mimicked well, putting player skills in the spotlight, and allowing rounds to be completed quickly
Entertainment An excellent debut that blends the basics of the sport with light fantasy
Replay Moderately High