The official Pokémon website has been updated with some new images and some new details about Sableye and its Mega Evolution.

Sableye has been appearing in the Pokémon games since the original Ruby and Sapphire, but during E3, it was revealed it will be able to Mega Evolve in Omega Ruby and Alpha Sapphire.

Sableye has concentrated all of the energy from its Mega Evolution into the red jewel on its chest, which increases in size and detaches from its body. This enlarged jewel boasts incredible hardness, and it is said that no attack can even make a scratch on it!

When Sableye Mega Evolves, its Defense and Sp. Attack stats both get big boosts. Its Speed stat does decrease slightly, perhaps because of the weight of its huge jewel. Thanks to its Magic Bounce Ability, any moves that affect only stats or status conditions will be bounced back at its attacker.

For more on Omega Ruby and Alpha Sapphire head here and here for a few predictions about the upcoming remakes. You can check out some more Mega Sableye images in the screen gallery below. 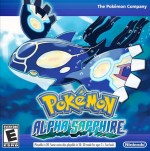