Game Freak has a large portfolio of Pokémon titles that have met tremendous success despite the fact they don’t take major leaps in innovation from one entry to the next. If you’ve played one Pokémon game in the series, you’ve essentially played them all. Battle across vast expanses of tall grass to beef up your Pokédex. Challenge gym trainers region-wide and pummel their Pokémon to collect precious badges. In HeartGold, it’s no different.

As a remake of the Game Boy Color’s Pokémon Gold, you’ll tread the same map locations and experience the same storyline. However, even though you’re replaying a game that first debuted nearly 10 years ago, watching a Poké Ball rock back and forth on a possible capture will still make you hold your breath until you hear the satisfying click. Nostalgia may not be enough for some players to give HeartGold a go, thus the addition of the bundled Pokéwalker is certainly welcome. The Pokéwalker is a fun, hands-on alternative to the in-game Pokémon Day Care that will allow you to level Pokémon who may not be ready to battle in their current state. Similar to the Pokémon Pikachu pedometer that interacted with the Game Boy Color back when Gold was released, the Pokéwalker allows you to easily transfer collected Pokémon via infrared to and from the device. Once a Pokémon is stored, the player can earn Watts based on how many footsteps are taken, which is the currency needed to participate in Pokéwalker minigames that allow you to collect rare items and capture hard-to-find Pokémon.

Once your stored Pokémon is returned to the game cartridge, a cute animated story will be told on the DS screen noting dates and times you went for walks, times you were idle, instances of Pokémon encounters and battle results. Did I mention it’s really cute? Upon return, your Pokémon will earn a level increase as well. With the ability to gain new items and Pokémon, and opportunities to level-up your existing Pokémon without the usual grind, the Pokéwalker is a solid addition to any trainer’s toolset. It’s also a pretty decent pedometer if you’re looking to keep track of your activity levels. The standard wi-fi connectivity options that have appeared in some of the more recent Pokémon games are available to interact with trainers around the world and trade Pokémon to boost your collection. The only other notable addition is the inclusion of Pokéathlon games, a series of single-player minigames that make complete use of the touch screen. Though a minor inclusion, the Pokéathlon is just one more change that separates this game from the original source material.

Gold’s timeless gameplay combined with the Pokéwalker and extra minigames makes the decision to catch them all over again a no-brainer. Even though the classic Pokémon formula still works as evidenced by HeartGold, I can’t help but hope for a new Pokémon title that breaks some new ground. 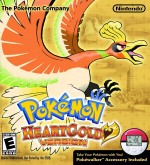 Gold’s timeless gameplay combined with the Pokéwalker and extra
minigames makes the decision to catch them all over again in this remake a no-brainer.


Purchase More Info
8.5
i
Game Informer's Review System
Concept It’s a Pokémon RPG. Do we really have to explain?
Graphics Johto region and character sprites get a fresh paint job modeled after Diamond, Pearl, and Platinum
Sound You’ll find yourself humming along to familiar tunes
Playability Pokéfans and newcomers to the series can easily jump right in
Entertainment A trip down memory lane with a few added perks to enhance the training experience
Replay Moderate