Game Freak has spent years building upon a money-making gameplay formula that involves engaging countless critters in addicting rock-paper-scissors style battles on a quest to catch ‘em all. Though the basic mechanics of the franchise have been effective, Pokémon fanatics have been clamoring for the series to evolve for years. While the latest franchise entries, Black and White, don’t necessarily make any major leaps in innovation, they do take steps in the right direction.

Professor Juniper kicks off the action by sending our matured protagonist on a lengthy adventure to complete the Pokédex, battle trainers across the expansive Unova region, earn gym badges, and ultimately become the Pokémon champion – pretty much standard fare. While veteran trainers might be put off by some of the explanations on how to catch and train Pokémon early on, the action quickly picks up with the introduction of Team Plasma, a group bent on the liberation of Pokémon and releasing them from the selfish demands of their trainers. Regular encounters with the team while exploring Unova unveil that their intentions of freeing Pokémon are not as benevolent as they seem.

Unova is home to memorable hot spots such as the business district of Castelia and the center of entertainment, Nimbasa City. Upon entering each location, you see how far the series has come from a technical standpoint as sweeping camera angles show off each city’s amazing detail and scale. Towns scattered across the massive world map are home to a number of fun diversions such as Pokémon musicals, arena battles, and the occasional NPC who lost a Pokémon and needs your help. These tasks break up the hours spent scouring patches of grass for new captures.

Just like in any other Pokémon title, you’ll spend a large amount of time engaged in battle. With the new Pokémon introduced in Black and White, finding a fresh face and developing new strategies based on the unfamiliar opponent’s strengths and weaknesses is part of the fun. To mix things up, 3v3 battles are introduced for the first time in the series, requiring a new level of strategy by determining which Pokémon to send out while being mindful of the elemental properties of your opponents. This addition injects a much-needed dose of variety, but you still spend the bulk of your experience in single and double battles, since 3v3 doesn’t make an appearance until much later. Still, once you put together a winning team, battles of any size are just as addicting as ever, and only get more satisfying as your Pokémon evolve.

Pokémon Black and White do a great job building upon already solid features and taking them to the next level. With new Pokémon, fun characters, unforgettable locations, and changes to the battle system, Game Freak has given true fans a reason to become a trainer again. 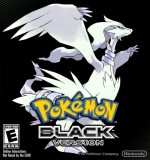 While the latest franchise entries, Black and White, don’t necessarily
make any major leaps in innovation, they do take steps in the right
direction.

Purchase More Info
8.75
i
Game Informer's Review System
Concept Pokémon enters the fifth generation with new critters to capture and train in order to become the ultimate champion
Graphics The best-looking Pokémon RPG to date. Each city and the respective gyms are gorgeous and full of personality. Battle sprites are more animated than in previous entries
Sound Each town has its own catchy tune. You’ll also find yourself humming along to familiar favorites
Playability If you’ve played a DS Pokémon game in the past, you’ll be right at home
Entertainment Plenty of new Pokémon to study and collect, plus exciting locales filled with fun diversions makes the Unova region worth exploring
Replay Moderate