Pokémon trainers have something new to fill the time when they’re not busy taming wild beasts in the series’ main entries. However, players won’t likely feel compelled to match ‘em all in this puzzle spin-off thanks to Pokémon Battle Trozei’s repetitive nature.

You drag icons around a grid, and matches of three or more are removed from the screen. If you can follow up a match of four or more with another valid match, you enter a special “trozei chance” mode. Matches of two or more count in this state, and the frenzy continues as long as you quickly keep your combo going or clear the screen. All of these successful matches weaken the wild Pokémon that appear, and the defeated critters are added to your Pokédex.

The game features hundreds of Pokémon, which can be problematic. There’s a reason why match-three games use easy-to-identify iconography like gems, candy, and colorful blocks. Pokémon Battle Trozei’s visual clutter needlessly obscures the playfield when you’re looking for combos. That’s where most of the difficulty comes from; once I settled into the rhythm of activating trozei, clearing the screen, and repeating, it became less of a challenge and more of a chore.

Players who know their Aurorus from their Emboars have a slight advantage. Pokémon have elemental weaknesses and alignments, and knowing what a ghost Pokémon is weak against is helpful. You can bring support Pokémon into matches, which adds a bit of strategy to the proceedings. Some have special abilities, like hitting with extra damage in matches of five or more, or healing the player’s trozei box (wild Pokémon regularly attack, and when the box is destroyed, it’s game over).

I’m a firm believer that a puzzle game needs to stand apart from whatever license or theme it has slapped on it. The game is the mechanic, after all. This is a case where characters are really the only really appealing thing there is. Games like Puzzle & Dragons have successfully juggled a similar mechanic and character-collection elements, proving that it can be done – and done well. Pokémon Battle Trozei is too superficial to remain interesting in the long term.

6
About Game Informer's review system
Concept
Fill up your Pokédex by lining up collectible critters in this match-three puzzle game
Graphics
Matching Pokémon heads is a cute idea, but their similarities can create problems
Sound
The music speeds up when you’re close to defeat, which is the only vaguely remarkable thing about it
Playability
Dragging the icons around works well, though players with a 3DS XL will be at an advantage
Entertainment
Strip away the license, and it’s a mediocre puzzle game
Replay
High 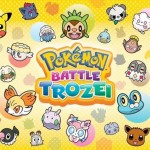