Gamers were dumbfounded when PopCap announced it was transplanting the Plants vs. Zombies series from the backyard to the battlefield. To say the multiplayer-shooter spinoff is a huge departure for the casual game developer is an understatement, but the aesthetics and lighthearted tone are a wonderful change of pace for the violence-obsessed genre. Dig beneath the surface, though, and you find some fundamental flaws that hold back this family-friendly shooter.

PopCap is known for making highly polished games that virtually anyone can pick up and play. Unfortunately, that equation only rings half true for Garden Warfare. The developer's simplified approach to the genre does away with basic concepts like sprinting, melee attacks, and limited ammo, making it easy for anyone to get into the swing of battle. However, the gameplay is uncharacteristically buggy; players get hung up on other characters and geometry, corpses twitch on the ground, and even the slightest bit of network lag renders some abilities (like the all-star zombie's dash attack) ineffective. A variety of classes and unlockable characters add some nuance to the simple fun, but PopCap's limited mode offerings hamstring replayability.

Garden Warfare only features two main competitive modes: Team Vanquish and Gardens & Graveyards. Team Vanquish is your run-of-the-mill team deathmatch. Gardens & Graveyards tasks zombies with assaulting a series of consecutive capture points in a map, similar to Battlefield's rush mode. A classic variant of each mode disables upgrades and unlockable characters (making them less interesting), and the beginner mode gives you more health the more you die, but you're still playing one of two basic formulas. Gardens & Graveyards is clearly the main attraction. Maps have unique themes, and capture points are built around interesting locations that facilitate large-scale confrontations. Every map features an interesting final objective, such as sneaking five zombies into Crazy Dave's mansion or destroying the roots of a giant sunflower growing inside of a lighthouse. Gardens & Graveyards provides hours of fun, but eventually you get tired of assaulting or defending the same points on the same handful of maps, and Team Vanquish does little to alleviate the boredom.

Garden Warfare's co-op offerings are equally uninspired. Garden Ops is a four-player horde mode, which tasks players with defending a garden against ten increasingly difficult waves of zombies. Aside from the occasional zombie boss or special wave, you don't have much to draw you in once you've beaten a few matches.

Garden Warfare's most interesting twist is how it incorporates the series' tower-defense elements into matches. Players can spawn zombies or plants in designated locations on the map, which then attack opponents autonomously. Unfortunately, these characters are treated as consumable items that players must purchase before matches using Garden Warfare's microtransaction-ready economy. The vast majority of Garden Warfare's content is locked behind its PvZ Coin currency. Support plants and zombies, customization items, weapon upgrades, and even new class characters are bought with the coins you earn from matches. However, can't just buy what you want; instead you must purchase blind card packs of varying prices. Consumable card packs give you a handful of zombies and plants to summon during matches, while more expensive packs provide random upgrades or character stickers – though you have to collect all of the stickers for a character before you can actually play as them. Like any good pusher, EA gives you a couple packs for free, but after that the grinding for coins begins.

This faux free-to-play approach undermines Garden Warfare's promising tower-defense elements. Each plant or zombie you spawn feels like a waste of money; regardless of how helpful they may be on the battlefield, buying consumable packs just holds you back from the larger goal of unlocking more playable characters, which is the only motivator to continue playing after you've learned the maps inside and out.

Those extra playable characters are worth unlocking. Although they have the same class abilities, each character has its own unique twist on gameplay. For instance, the marine-biologist zombie features a higher rate of fire than the regular scientist zombie, and the fire sunflower deals extra elemental damage. Unfortunately, characters take an exorbitant amount of time to unlock, and because card packs are random, you can't just unlock upgrades or characters for the class you're interested in.

Perhaps the most surprising aspect of the economy is that there's no option to purchase coins with real money, but EA says it may institute such an option in the future. Frankly, I can't imagine a world where that change doesn't happen, but it doesn't really matter. The progression system and tower-defense elements are already broken to accommodate the possibility. Garden Warfare is designed like a free-to-play game, despite the $30 price tag.

PopCap's approach to class progression also plays out for the worse. Instead of gaining experience points, you level up classes by completing a series of challenges. Things start out easy – deploy five potato mines, kill three plants with rockets – but more specific challenges distract players from what's best for the match and make leveling up a pain. Killing two scientist zombies with a sun beam or shooting down three garlic drones seems easy enough, but what if the other team isn't using those characters? I went entire matches making zero progress with characters simply because the right elements weren't on the battlefield. Some challenges are downright devious; spawning five conehead zombies first requires you to buy consumable card packs until you randomly receive enough of them to complete the challenge. Luckily, you unlock all of the abilities for a class in the first few levels anyway, so you can abandon the progression scheme after that.

Before the tedium set in, I had fun with Garden Warfare. Spending a few hours with the accessible combat and charming world was entertaining, but the random card packs and achievement-style leveling system killed my desire to keep playing. Garden Warfare's simplified gameplay and limited map selection can only entertain for so long – without rewarding progression, there's no carrot (or brain) at the end of the stick.

The Xbox 360 Difference
While both the Xbox One and Xbox 360 versions have their share of problems, the last-gen incarnation fares considerably worse. While testing the 360 version, I ran into increased gameplay bugs, load times, pop-up, and embarrassingly blurry visuals as the game struggled to stream in the high-resolution textures. These shortcomings don’t ruin the experience, but they are significant enough to earn the Xbox 360 entry a lower score than the Xbox One version. 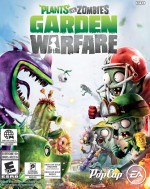 Purchase More Info
6
i
Game Informer's Review System
Concept Create a family-friendly shooter based on PopCap's cartoony tower-defense IP
Graphics PopCap has done a great job of translating its lovable characters into 3D
Sound The music is catchy but repetitive. The plant and zombie voices are as entertaining as ever
Playability The controls aren't as polished as your average shooter, and the questionable stability of EA's servers results in some janky moments during matches
Entertainment Already-limited offerings are diminished by a quasi-free-to-play monetization scheme
Replay Moderate