First-person shooter fans have played the role of the sole, galaxy-saving hero countless times before. PlanetSide 2 is not that experience. On these chaotic battlefields, you are not a master chief or legendary guardian who can expect to have an unlosable war served up to you on a silver platter. Instead, you are a grunt among hundreds, and your job is to serve the war effort until you die (usually a matter of minutes), hopefully taking down a few members of the opposition with you.

PlanetSide 2 drops players into an endless war. Three unique factions vie for territorial control of four continents, any one of which puts the battle zones of other competitive shooters to shame with its sheer size. Also unlike other shooters, this war is truly endless. Combat is not parceled out in discrete matches; war rages constantly, with no definitive winner and no MVP accolades to aspire to.

Players fight on a single server (chosen when you create your character), with no purpose other than to wrest control from the other factions, one interconnected zone at a time. Should one team overrun a continent, it becomes locked for a short period, providing a modest (but temporary) bonus to the winning team before the area is put back into play. Teamwork is essential to gaining control, which leaves you as a small cog in the relentless, bloody machine. While that may not sound appealing to those accustomed to being the star of their own personal hero story, it gives PlanetSide 2 its own unique feel – that of true large-scale warfare, whose strategy and complexities are slowly revealed over time.

Unfortunately, Daybreak Game Company does little to help you figure out those complexities. You start by picking one of three factions, which you are told nothing about beyond their names. You have to head online if you want to know how the New Conglomerate differs from the Terran Republic, or why the Vanu Sovereignty look like rejected Tron extras. After the slimmest of character customization options, you are thrown into the fray. A few computer terminals in your faction's warp gate spit out some minor explanations, but it's up to you to figure out the control scheme, complex upgrade mechanics, and how the hell taking over territory actually works. The new "tutorial" continent Daybreak created for PS4 users succeeds in downsizing the scope of the conflict to a comprehensible scale, but you can still expect to spend a few hours in abject confusion as you get a feel for the game. The harsh learning curve is especially unfortunate for PlanetSide 2's player base; even though its free-to-play status is likely to draw in a lot of players, those who give the game a shot will soon realize that while it may not demand any money to try, it does require a lot of time. PlanetSide 2 isn't a game you can just pick up and play.

However, the investment is worth it. Despite being a free-to-play game, PlanetSide 2 is not only fun, it's also fair. Players earn access to every class, vehicle, and upgrade as they level up, and all weapons and items can be purchased with certification points earned alongside your XP. Only cosmetic items and XP boosts are locked exclusively behind the pay wall. I never felt like I was being penalized for not shelling out money – in fact, given the poor exchange rate "battle cash" offers for real money, I was never tempted to buy anything.

While the base rate of gaining certs is slow, PlanetSide 2 plies you with constant bonuses that boost your acquisition to satisfying levels. The only downside is that Daybreak has inexplicably omitted the PC version's VR training facility, which lets you try out new equipment before you buy it. This exclusion is a huge detriment; new weapons and attachments are considered sidegrades, not upgrades, so your weapons of choice come down to preferences that can't be surmised from the stats screen. Dropping a day's worth of certs on a gun only to instantly realize you don't like how it handles is a huge buzzkill and can kill your urge to participate in the grind. Daybreak's technical implementation is also far from perfect. Load times can be long when switching locations, and I ran into a number of glitches and crashes, particularly when respawning. These hiccups aren't enough to ruin the experience, but the lack of polish does stand out in what is already a dated-looking game.

Eventually, the grind is all there is. Fighting a war no one can win has a certain futility, especially when territory control boils down to the singular task of capturing or defending control points. That said, the well-conceived classes and vehicles offer plenty of strategic variety and complexity; PlanetSide 2 accommodates all styles of competitive warfare, including slow and methodical snipers, run-and-gun assault commandos, full-scale vehicular combat, and everything in between.

Player count often plays a large role in the tide of battle; while a good squad can steamroll through a series of zones, your faction won't be able to hold them without ample back up. No matter how good you are, some standoffs will be futile, but the scale of PlanetSide 2 means you can always find a more engaging showdown somewhere on the map. I'm not the sharpest shooter, but I found the balance more than fair. Even if I didn't kill an opponent every life, various team-assisting tasks allowed me to rack up satisfying amounts of XP, and respawn times are mercifully brief, so you can jump right back into action again and again.

The more I play PlanetSide 2, the more I enjoy it. Daybreak says it is committed to improving and expanding the MMO, which should give players plenty of reasons to continue returning to the battlefield. As it stands, there's more than enough incentive to give PlanetSide 2 a try; the gunplay is solid, player progression moves along at a rewarding clip, and the intercontinental war is like no other in gaming – even if it lacks a point. 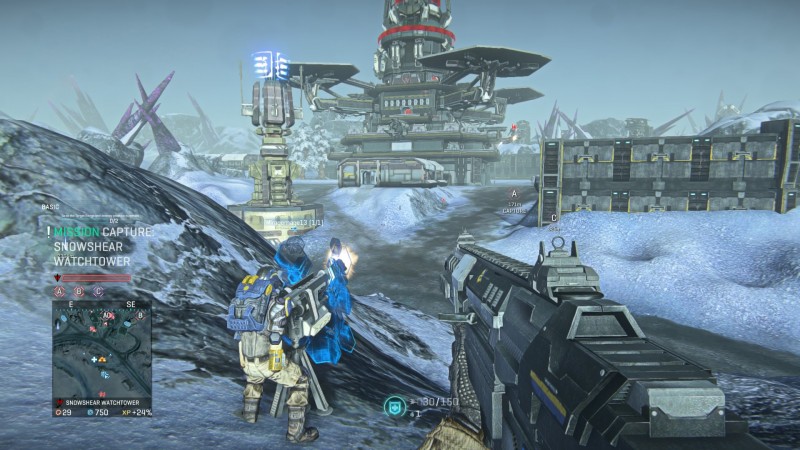 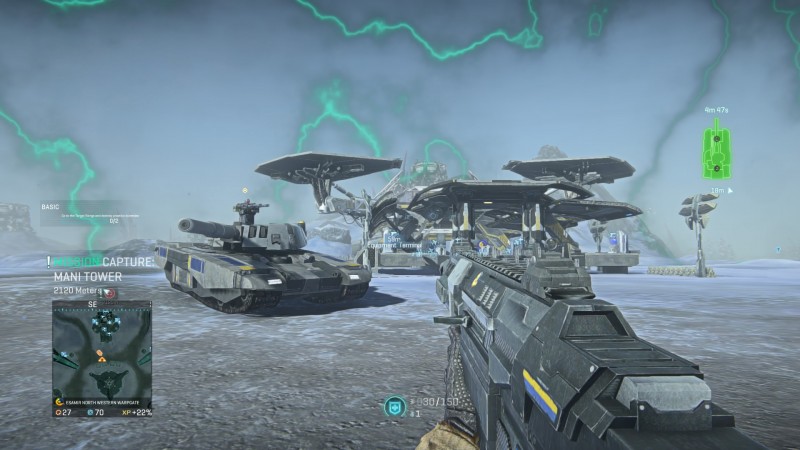 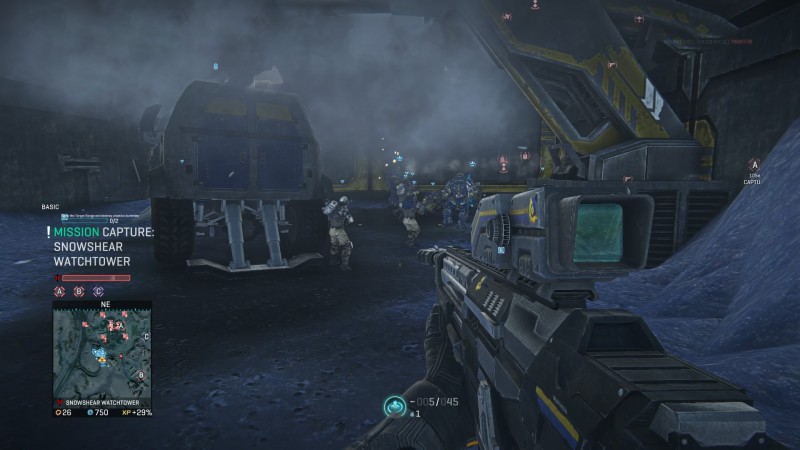 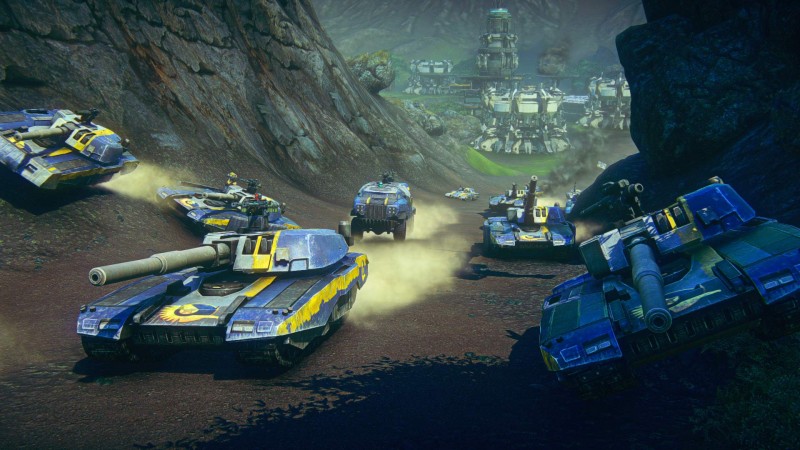 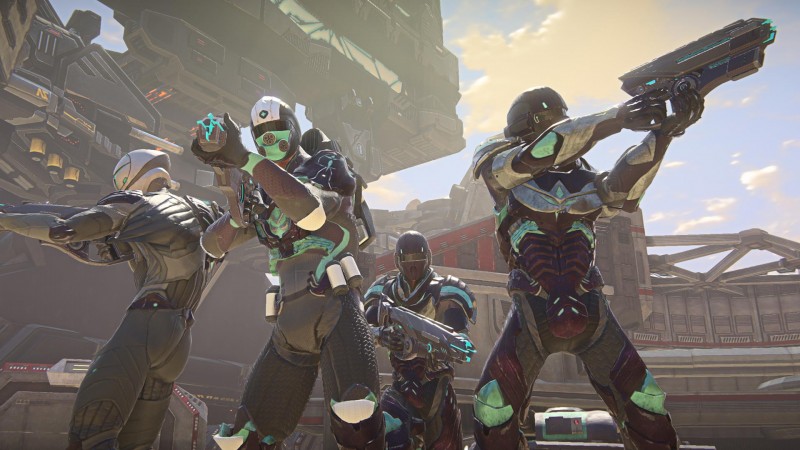 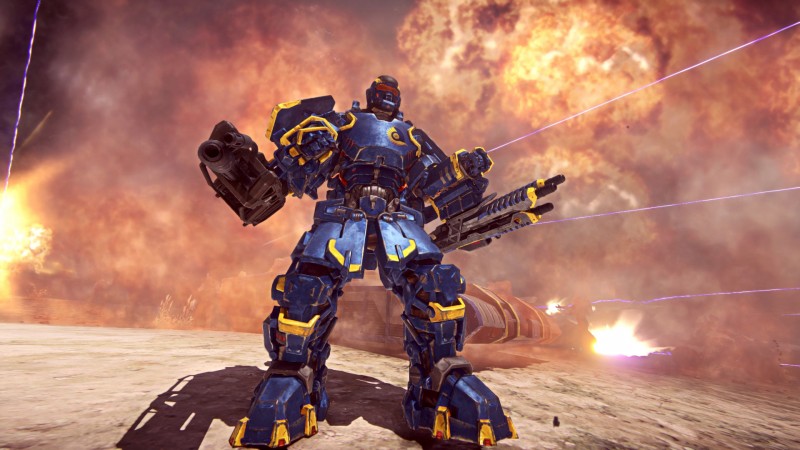 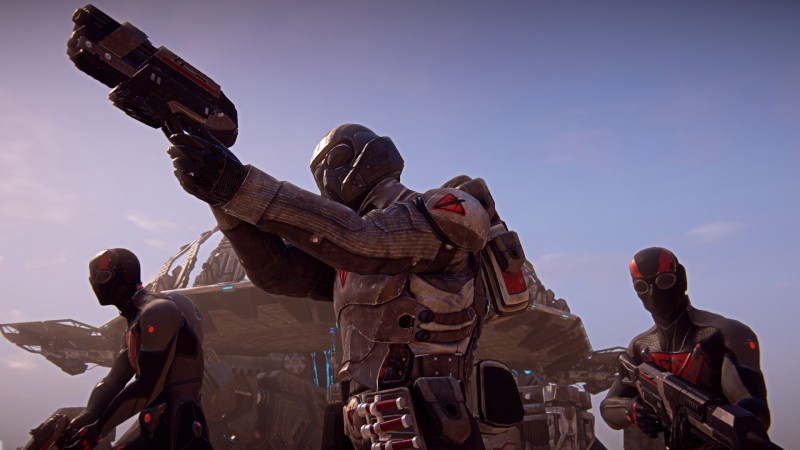 7.75
About Game Informer's review system
Concept
Bring PlanetSide 2's massive conflicts to console with a free-to-play monetization scheme that doesn't ruin the competition
Graphics
At its best, PlanetSide 2's visuals are mediocre, and some of the character models are downright goofy-looking
Sound
The sparse, forgettable soundtrack is drowned out by the glorious cacophony of heavy artillery
Playability
The almost complete lack of guidance gives PlanetSide 2 an unnecessarily steep learning curve. The actual shooting mechanics are solid
Entertainment
PlanetSide 2 is one long grind, but the scale and competitive feel are wholly unique
Replay
Moderately High