Let it never be said that indie developer The Behemoth hasn’t carved out its own unique identity thanks to the studios blend of stylish art and offbeat humor. Following on the heels of Castle Crashers and BattleBlock Theater, Pit People channels the exaggerated art style of its predecessors while embracing a more strategic mode of gameplay. The result is a romp of a game that rewards you with hilarious jokes for dominating foes on the battlefield.

Pit People embraces absurdity out of the gate, opening on a blueberry farmer named Horatio fending off cannibals who want to eat his son, Hansel, while the world is showered in green good and a cosmic narrator mocks the farmer. Things only get wackier from there, with Horatio going on a quest to rescue his son after the bear kidnaps him, recruiting a gallery of characters to help out. Though Horatio doesn’t have much personality, the crew surrounding him is hilarious and memorable, like Sofia, an explorer who passionately claims every new area you come across in the world “in the name of Spain.” You also have a literal cupcake named Gluten to serve as your healer, and the mischievous-yet-loyal cyclops Yosef.

Your quest takes you through an overworld filled with every biome imaginable: deserts, snowy plains, forests, candy mountains, and cities made of circuit boards. Pit People’s world doesn’t have a unique identity, since more than anything it exists as a series of disparate environments stitched together. But that ultimately works, because it draws attention to Pit People’s biggest offerings: zany characters and battles.

The battle system is an odd blend, eschewing a surprising amount of unit control for a hexagonal battlefield where placement rules supreme. You can’t specify which enemies your units attack. Instead, you move them within range of enemies, and they attack whatever foe is there. If multiple foes are within that unit’s range, then they randomly strike one of them. This lack of control can be frustrating, like when the enemy with a sliver of health remains on the field because your unit attacks the foe next to him, but it also adds a kind of unpredictability that’s often missing from strategy games and can have its own rewards. For example, I once meant to shoot an enemy unit with an arrow but instead shot his companion. The companion died and exploded, dealing severe area damage to everyone around him, clinching in one exhilarating moment a battle that was uncertain from the get-go.

At least half of the strategy in Pit People comes from pre-battle preparation. You have a certain number of slots in your party. You obviously want attackers and defenders, but how do you break that up? Do you have an archer for your long-distance attacks? Or a mortar? Do you sacrifice two spaces in your party to make room for a cyclops capable of dealing heavy physical damage? Should you bring a healer even though your units regain health when they level up in battle? Once the encounters start in Pit People, you’ve already made the important decisions that determine the flow of the fight. Ultimately, I think the uniqueness of this setup makes for a more interesting strategy game, but arriving to a battle and being screwed from the get-go because you don’t have the right unit can be frustrating.

If you want to add another element in the mix, you can also play Pit People co-op (local and online), with you and your partner splitting the characters between you. It’s a neat feature that adds another dimension to tactical play, but it’s not particularly deep or necessary to enjoy Pit People. You can also play battles in the pit, an in-game arena, to earn money to buy goofy cosmetics for your characters and mercenary characters to wage war for you.

The first few fights are surprisingly difficult, as I struggled to get my bearings with the idiosyncratic system and understanding how important preparation was. After the first couple of hours, I started building my army by capturing units during battle (buy the item that lets you do this) and making sure each slot had a character with a defined purpose. Soon I was devising tactics for my units, like using my healer as bait to draw enemies into firing range of my mortar. Figuring out how to manage your units and eventually triumph is immensely satisfying, as are the gags.

Pit People is a ridiculously funny game. If you’re fan of Monty Python’s wacky brand of humor, you’ll feel right at home with the jokes here. Whether it was the mocking and villainous space bear, who acts as the game’s narrator, or the whimsical Loki-like Jerkimedes tricking me into slaughtering a retirement home of cupcake people (oops), Pit People had me in stitches. The many sidequests are also hilarious, with several of them functioning as multi-step short stories centered on memorable characters, like Harry the Troll detective, who speaks as though he’s reading a gumshoe novel.

Pit People does a lot of things right, but it also has abundance of unnecessary systems that give rise to mild frustration. For example, when you leave your town to go out into the world, you have a limited inventory that you can use to store healing items, recruitment items, and the spoils of battle. If you’re completing side quests littered throughout the world, that inventory fills up quickly. And since there’s no fast travel to your home, you have to constantly journey back to to your base. This is tedious, especially since the fog of war on the overworld never goes away, meaning you have to constantly check your map to see where you’re going. The main quest also has a questionable stealth level that’s not insurmountable, but it sure is annoying.

When all is said and done, it’s the potential for laughter that proves to be Pit People’s standout achievement. The tactical gameplay is interesting and entertaining, but the comedy is the star of the show here. I enjoyed my time with The Behemoth’s new, funky world, as well as the cast of lovable characters who inhabit it, and will fondly remember many of its gags for a long time to come. 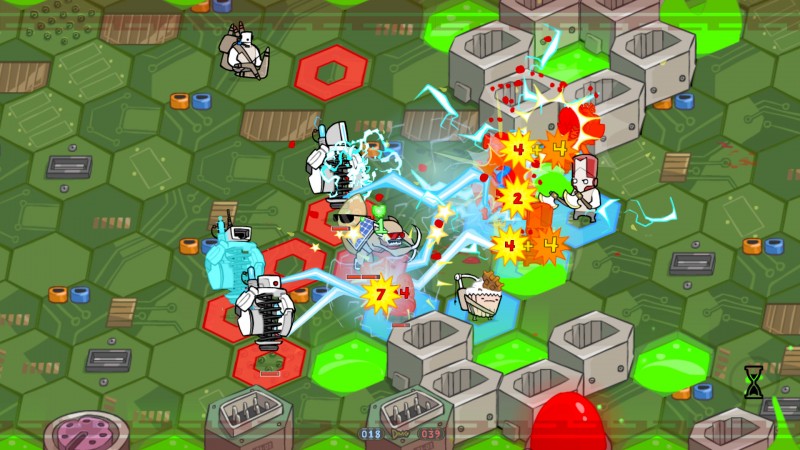 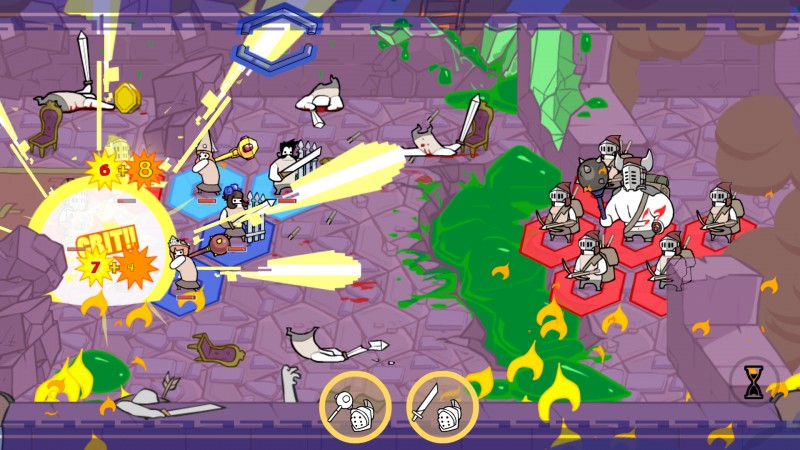 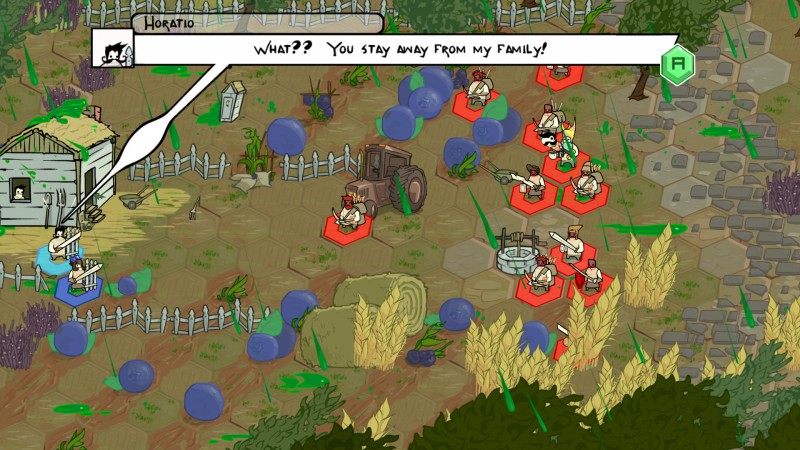 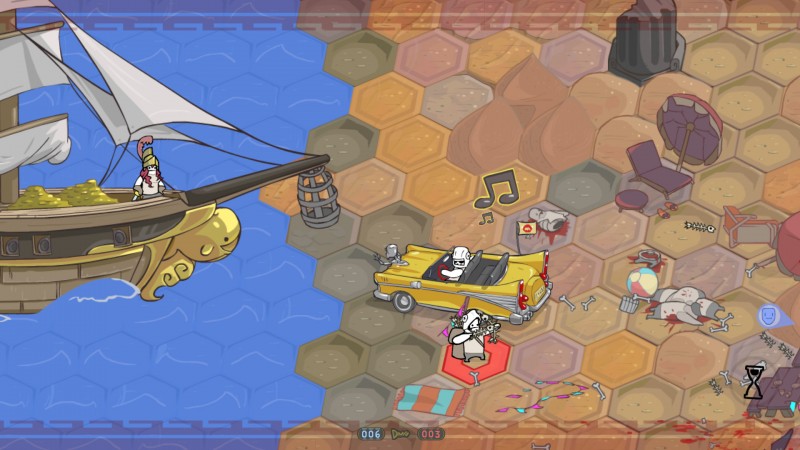 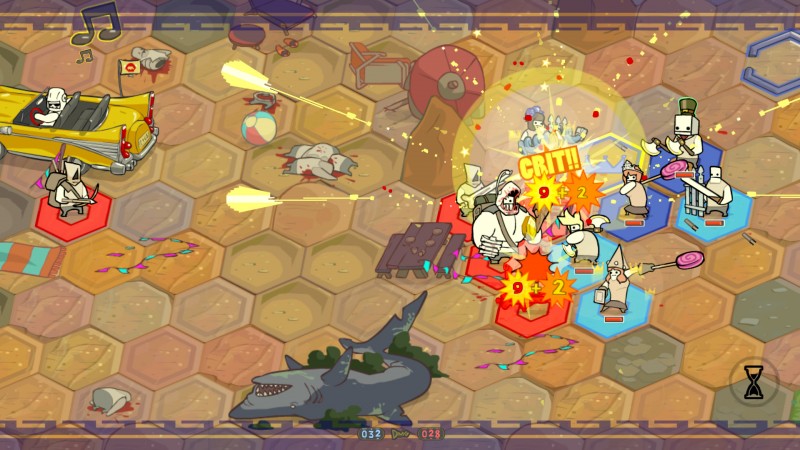 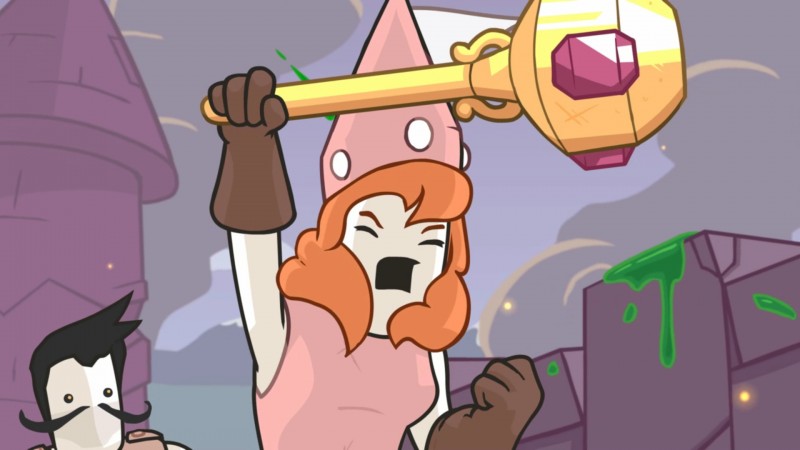 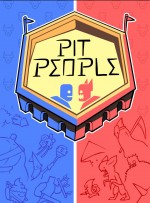 Pit People is a fun and hilarious romp through a fantasy world.

Purchase More Info
8
i
Game Informer's Review System
Concept Help blueberry farmer Horatio and his merry band of comrades take on an evil, destructive force bent of bringing misery to mankind.
Graphics Pit People’s world and battles are beautifully illustrated and animated
Sound The upbeat soundtrack is a great mix of fun songs that fuel your battles with pep
Playability An odd strategy system takes a battle or two to get used to, but Pit People falls squarely into the “easy to learn, difficult to master” style of tactics games
Entertainment Though its battle system isn’t revolutionary, Pit People mixes brain-teasing battles with a barrage of great humor that makes it an enjoyable jaunt through a fun and colorful world
Replay Moderate