After years of plunking down change for Zen Studios' endless stream of licensed and original DLC table packs, pinball fans finally have a proper sequel to get excited about. Not only does Pinball FX 3 unify all of Zen's platforms under one umbrella, it offers a host of new modes and progression systems to keep players busy. While I have quibbles with how the competitive side of Pinball FX 3 is handled, it is still an easy upgrade to recommend to pinball fans.

Like Zen's previous offerings, Pinball FX 3 isn't so much a standalone game as it is a platform. Aside from the one free table included in the download (Sorcerer's Lair), players build up their collection by purchasing DLC packs of tables based on various themes and licenses. Whichever ones you choose, Zen still reigns supreme in the pinball sim space, offering up realistic physics, superb visuals, and intricate table designs that can take hours to master. It's an admittedly niche itch that Zen has been scratching for years, and Pinball FX 3 makes it all the more satisfying.

To say that Zen Studios has gone above and beyond to do right by its returning fanbase is an understatement. Not only is the base game a free download, but Zen is also allowing players to transfer their Pinball FX 2/Zen Pinball 2 tables over to Pinball FX 3 free of charge. While a few tables have hit the cutting room floor due to licensing issues (most notably the recent South Park and Plants vs. Zombies tables), returning players won't have to spend a dime to get their existing collections up and running in Pinball FX 3 and reap the improvements. That said, you should plan to set aside of good chunk of time for the clunky import process, which queues up all of your tables as individual downloads through your console's digital store, but all in all it's a small price to pay. The massive library of tables may be daunting to newcomers, but they all offer free demos, so you know what you're getting before you break out your credit card. Pinball FX 3 features numerous quality-of-life improvements like better collection sorting and visual upgrades to your existing tables, but the biggest and most exciting shake-up is the new progression-based challenge mode. This allows players to tackle single-ball, five-minute, and escalating score-attack challenges, all of which are designed to keep play sessions brisk and bite-sized. Achieving milestones in these challenges unlocks and upgrades three wizard powers that can be used to slow down time, rewind ball drains, or drastically boost scoring for a short period. You also unlock a variety of passive perks just by playing, like bumper-score bonuses and increased combo timers. Challenge mode is an exciting new way to revisit your collection, offering a string of quick-but-demanding goals to shoot for, while also mitigating the tedium of full-length matches and the frustration of drains (because the five-minute and score-attack challenges have unlimited balls). Pinball purists can always stick to classic mode for their ongoing score rivalries, but the sense of long-term progress that challenge mode offers is hard to say no to.

Pinball FX 3 also offers a couple of new avenues for competitive play. Players can now create custom tournaments on their table of choice for friends or the greater public. The result is a long list of ongoing tournaments at any given time. Players can also participate in leagues, which provide more specific seasonal challenges as well as another seemingly endless ladder to climb. The XP rewards for both tournaments and leagues are unfortunately underwhelming, but overtaking someone else's high score always offers a satisfying payoff. That brings me to my biggest knock against Pinball FX 3: The friendly rivalries that Zen's pinball games have fueled for years aren't as pronounced as in previous games. Sure, each table still offers up a host of leaderboards, but the automated messaging system that taunts your friends is gone, and the game doesn't notify you which tables you've lost top honors on. As such you have to manually check the leaderboards of every table to find out, then contact your friends through your console's messaging system if you want to fan the flames of competition. Pinball FX 3 still pops up a notification when you're approaching a friend's score during play, but it shows up so close to the goal that you probably have already beaten it by the time it registers. The post-match screen also no longer lauds your victories over your friends, which diminishes the sense of achievement. These omissions are a surprising and confusing step backward compared to Zen's previous games, where your competing scores and rivalries were always front and center. The rivalries are certainly still there, but the game does not encourage them enough.

Pinball FX 3's table guides are also due for a redesign. A new general tutorial does a good job coaching players on a few basic pinball principles on an actual table. However, the table guides are still relegated to the pause menu, and remain text-heavy and tedious to parse. As such learning the ins and outs of a table is still a time-consuming process, as is refreshing your memory of how to score big on old favorites. I'd love to see future table guides take the teaching to the table like the general tutorial. All in all, Pinball FX 3 contains a number of welcome additions and improvements, and gives pinball fans what they need most: an excuse to return to and keep replaying all of their favorite tables. Hopefully the studio can also shore up and heighten the sense of rivalries again, but either way, it's a great time for pinball wizards to dive back in. 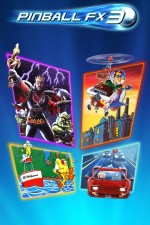 Pinball FX 3 contains a number of welcome additions and improvements, and gives pinball fans what they need most: an excuse to return to and keep replaying all of their favorite tables.

Purchase More Info
8
i
Game Informer's Review System
Concept Unite all of Zen Studios' various pinball offerings on a new and improved platform
Graphics Expect modest visual and lighting boosts to all of your favorite tables
Sound The sound effects haven't changed on your old tables, but the new menu music is pretty catchy
Playability Controls remain as sharp and responsive as ever. The new unlockable power-ups provide some fun meta progression
Entertainment Pinball FX 3 provides some new ways to enjoy your pinball collection, even if your rivalries are a bit more buried
Replay High