Pillar certainly has indie bonafides. Developed by a lone auteur (Michael Hicks), filled with vague and nonlinear storytelling, and based on the Myers Briggs personality assessment test, it's clearly in the lineage of critical darlings like Braid. However, nailing the aesthetics of an arthouse indie game and making a well-crafted one aren't the same thing.

It's one of those games I almost feel bad for not enjoying. It's a labor of love, so why don't I love it? As usual, it comes down to the gameplay. While Pillar has a variety of unique mechanics (each divided up by personality type - "distant," "focused," etc.) they are all based on elements of game design that I'm happy to leave in the past. Whether using a laborious trial-and-error method to study the sentry patterns of guards or plotting out the best path to collect a series of orbs to open the gate to the next level, Pillar's core gameplay is more tiresome than enjoyable. For a time, I found the switch puzzles intriguing, but they overstayed their welcome. Pillar doesn't offer much in the way of explicit tutorials, so there are fun moments of discovery; unfortunately, what's left after you figure out what you're expected to do is less than meets the eye. As for the plot, I'm sure one exists, though I was not able to divine what it was. At some point, "enigmatic" and "nonlinear" become plain "confusing," and most of Pillar takes places past that threshold. I found an interview in which Hicks cited the film Magnolia as inspiration, specifically its weaving together of seemingly disconnected characters' storylines into a whole.

After playing the game, I can see what was attempted here, but the dots are not sufficiently connected to convey anything meaningful. It has allusions to aging, regret, and - in some interesting post-death sequences - the suggestion of an afterlife. I like to consider myself an intelligent person. I graduated from college. I've read Infinite Jest. I cannot tell you what's going on in Pillar.

I didn't like the game, but I want to take a moment to praise the soundtrack. Composed and performed by Hicks, Pillar has a chance of becoming one of my favorite game soundtracks of all time. Filled with gently cycling synth motifs and luminous swells of guitar, the score is transporting in a way the game itself never quite achieves. If you're fan of the ambient works of artists like Brian Eno and Robert Fripp, you should investigate (it's available for purchase on Bandcamp).

Hicks is clearly talented; Pillar has a lot of interesting concepts that, sadly, don't come together in satisfying way. I have no doubt that he'll make a great game someday. This isn't it. 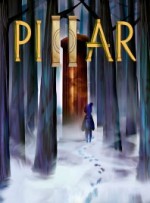 Pillar is one of those games I almost feel bad for not enjoying. It's a labor of love, so why don't I love it?